Armageddon in Retrospect by Kurt Vonnegut 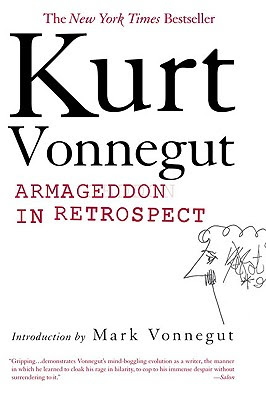 I wonder if I should bother to mention the sources of my books. Should I? Sometimes I do; sometimes I don't. Armageddon in Retrospect is a book that has been sitting on one of my shelves for several years. I came across it on one of those days that I was working on purging the shelves of books I'll never read, those that no longer interest me. Vonnegut is an old favorite of mine but I hadn't read any of his work in at least a decade.
When I happened across Armageddon in Retrospect, I opened it to read the first page and sat down immediately, unable to stop. So much for that day's purging! A book of short stories, a letter, a speech -- they all go a long way toward explaining Kurt Vonnegut's other works. It's been so long since I read Slaughterhouse Five (which I recall thinking was utterly brilliant) that I don't know if I was aware that he'd been a prisoner of war during the notorious WWII bombing of Dresden. My copy of Slaughterhouse Five is decades old and brittle, so it probably does not contain any biographical material. At any rate, his son Mark's introduction is fascinating:

Every few years he sent me a letter telling me what to do in the event of his death. Every time, except the last, the letter would be followed by a phone call, reassuring me that it wasn't a suicide note. The day before he sent me his last "If I should die" letter, he finished the speech he was to deliver in Indiana to kick off the year of Kurt Vonnegut. Two weeks later he fell, hit his head, and irreversibly scrambled his precious egg.
I got to study that last speech much closer than most, since I was asked to deliver it. I couldn't help wondering, "How on earth does he get away with some of this crap?" His audience made it work. I quickly realized that I was reading his words to an auditorium and a world utterly in love with my father who would have followed him anywhere.
pp. 8-9 of Intro, Armageddon in Retrospect

I have to wonder if he'd have been quite as well-loved if this set of stories had been published in Vonnegut's lifetime. The intro is followed by a letter Kurt Vonnegut wrote from a P.O.W. Repatriation Camp in Le Havre, France. His frustrations were clear, despite the brevity. He had been captured -- one of the few in his division who were uninjured in a brief battle -- watched many more of his fellow soldiers die by friendly fire at a train station, was shipped to a labor camp and saw the destruction of Dresden. After Dresden but before his liberation, he was forced to carry bodies from air-raid shelters. Most were old men, women and children. When the Russians arrived and his guards fled, he and some others escaped Dresden, traveling and looting for 8 days. From these events came truck-loads of anger and guilt.
Most of the stories in Armageddon in Retrospect make his anger at humanity and his own personal guilt clear. I think it's plain that they really could not have been published within his lifetime -- or, at the very least, not within a few decades of WWII -- because much of that anger is, in fact, directed at his own countrymen. But, they are excellent stories with his trademark wit, well-defined characters, believable situations and dialogue.
There were a few stories that I found particularly memorable. In "The Commandant's Desk", an older man and his daughter in Czechoslovakia are thrilled when their town is liberated, till the Americans arrive at their home. The major in charge of the small town is abrasive, rude and convinced that the old man and his daughter were collaborating with the enemy.
Shocked, the aging craftsman agrees to carve an eagle design to replace the hammer and sickle he'd placed on a desk he was making for the Russian commander but doesn't tell the major about the "surprise" he'd added to the desk. And, it's a doozy. As the major continues to insult and frighten the old man, the elderly gentleman decides to turn the desk over to the major with the surprise intact. But, then a kind-hearted captain who has always treated the old fellow and his daughter well takes over command of the town, just as the desk is being carried away.
Oh, well, I can't tell you the rest. Sorry. Haha. Spoiler. The kind-hearted Captain Donnini of "The Commandant's Desk" is a repeat character who also appears in a story about a group of American soldiers imprisoned in Dresden, starving and spending their rare breaks sharing recipes and dreaming out loud about the food they'll eat when they're liberated. That particular story, "Guns Before Butter", is another of my favorites.
Vonnegut was also an artist and some of his art is scattered throughout the book, as well -- mostly what appear to be pencil drawings and some numbered prints that are usually text-only or primarily text with a bit of decoration. The final work of art is very revealing. It says [my choice not to use all-caps; the print is entirely capitalized]:

Where do I get my ideas from? You might as well have asked that of Beethoven. He was goofing around in Germany like everybody else, and all of a sudden this stuff came gushing out of him.
It was music. I was goofing around like everybody else in Indiana and all of a sudden stuff came gushing out. It was disgust with civilization.
p. 233

Excellent stories, highly recommended but be aware that they are honest expressions of one man's frustration with his fellow humans and their refusal to just get along with each other. He was a man who yearned for peace. If you live long enough, you realize people are always fighting each other somewhere and Vonnegut's frustrations especially make sense in the context of his early experience with war.
Speaking of controversial things, I have deliberately chosen not to ever dive into the various controversies that inflame readers and bloggers in our little corner of the internet, but I've got a Freaky Big-Eyed Cat Photo in which Fiona wonders about the latest kerfuffles: 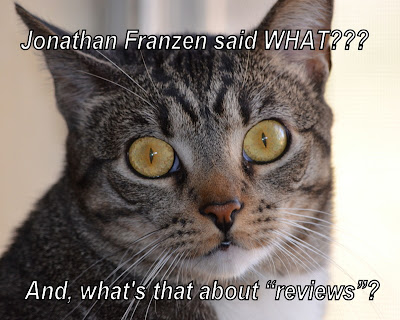 I actually wrote my thoughts down and opted not to publish them because, honestly, who cares about what two authors out of a million have to say? They're just drops in a sea of opinions. We should all be used to the odd bit of nuttiness, by now. Thanks for the help, Fiona.
©2012 Nancy Horner. All rights reserved. If you are reading this post at a site other than Bookfoolery and Babble or its RSS feed, you are reading a stolen feed. Email bookfoolery@gmail.com for written permission to reproduce text or photos.
Posted by Bookfool at 12:59 PM