Rose: My Life in Service by Rosina Harrison and The World of Downton Abbey by Jessica Fellowes

I don't have much to say about either of these books, although I enjoyed them both and they go together in a way. One cross-references the other. Time for mini reviews! 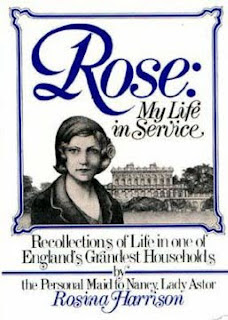 Rose: My Life in Service by Rosina Harrison is subtitled "Recollections of Life in one of England's Grandest Households by the Personal Maid to Nancy, Lady Astor". Boy, that's a mouthful. And, they're not kidding about the "grandest household" bit. The world-traveling Astors had something on the order of 5 homes. I can't even remember; I lost track.
I had a battered and stained old copy of Rose's memoir on my shelf and have meant to get to it for at least a year. But, it was Downton Abbey that shoved me over the edge. Whether you're a Downton Abbey fan or merely curious about what it was like to be a maid during the 30 years beginning around the end of WWI, Rose is worth the time. The vast number of servants involved in the running of the Astor households is mind-boggling. Sometimes I had trouble visualizing everything the author described -- and it seemed even more grueling than the life that's portrayed in Downton, but I think that's partly because there are quite a few "sitting around the servants' table" scenes that are done for the sake of having the characters interact in the series.
After reading Rose, I noticed Lady Mary mentions having met Sir Richard at Cliveden, the Astor's main house and the one that's pictured on the cover of Rose: My Life in Service. That made the episode doubly fun. There are plenty of photographs in Rose, so if you read Rose and then follow it up with The World of Downton Abbey, as I did, you'll have some reference points that will add to the reading experience of the latter. The Astor's butler, for example, is pictured, described and quoted in Rose and talked about in The World of Downton Abbey.
One of my favorite quotes, about how Nancy Astor's finer qualities came out during WWII:
Now in battle her qualities were shown. Her courage was not the "back to the wall" stoic kind of British courage, but the flashing, tempestuous, rousing, roistering courage of the Virginian--exemplified by the way she would turn cartwheels in air-raid shelters to cause a diversion when things were at their worst. Not your sixty-one-year-old Nancy Astor, lady of Cliveden, hostess to the aristocracy and Member of Parliament, but Nannie, the wild-eyed girl who rode unbroken horses. And along with this went the softer, compassionate creature, the voice behind the sad Virginia songs, who would comfort a mother whose child had been killed, while her own heart was grieving for the mother yet hardening against the Whitehall officials who in their shortsightedness had not declared Plymouth an area for the evacuation of children. This was a woman I could idolize.
~p. 189, Rose: My Life in Service
Recommended to memoir lovers, Downton Abbey fans and anyone else curious about life "downstairs" at a monstrous estate in England. I found the WWII years particularly engrossing. My copy was published by The Viking Press in 1975. Apparently, it's a first edition. It's a wreck, unfortunately, but readable. I'm glad I grabbed it when I found it at our library sale. 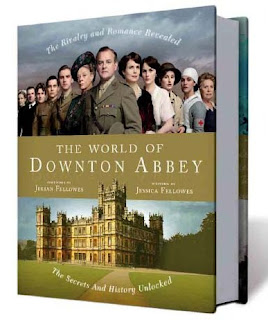 The World of Downton Abbey by Jessica Fellowes was a total indulgence. I was buying the two seasons of Downton Abbey on DVD and figured it would be fun to continue reading about the time period along with ogling the beautiful photos of cast and setting to stretch out the fun.
The World of Downton Abbey is, in fact, much better than I anticipated. Author Jessica Fellowes blends historical background with descriptions of the show's characters and their costumes, the settings, war, quotes from the show's creator and actors, plus loads of photos.
The only thing I disliked about The World of Downton Abbey was the way the text is interrupted by both photo layouts and pages describing the historical background/context of the show. So, you'll be reading along and find that you have to turn a page or two to get to the continuation of text, which means holding your place and then going backward to read a couple pages of other information, then continuing on with the general text. There's a lot of jumping back and forth and place-holding to be done, in other words. But, I was surprised at how well-written the book is and how enjoyable. I didn't expect The World of Downton Abbey to be quite so informative as to historical context; I was expecting fluff and a lot of photos, I suppose. Trust the British to do a "secrets and history" televised-series companion right.
Highly recommended to Downton Abbey fans. Well-written, informative, packed with gorgeous photos and interesting quotations. Plenty of resources are mentioned for further reading. The book does not contain spoilers if you haven't yet finished the second series and won't get around to doing so for a while, apart from describing all of the characters (so if you've seen the first season and taped or purchased the second, you'll know who is going to show up in the second series).
Addendum:
There's a quote in The World of Downton Abbey that confirmed something I'd wondered about a scene in The Painted Veil (movie):

Actors were reminded not to say 'nee-ther' or 'ee-ther' but 'nye-ther' and 'eye-ther'. The former only came into use after the Second World War when the American soldiers came to Britain.
p. 292, The World of Downton Abbey

For those of you whose interest in The Painted Veil was piqued by my triple review of book, movie and radio serial, watch for a scene in which Naomi Watts says "ee-ther". I didn't know who was playing Kitty, but that particular scene had me convinced that the actress must be American and now I see that it's about time period, not origin, thanks to a commenter (thanks, Lexi!), so I guess that quotation was a hint. Fascinating.
©2012 Nancy Horner. All rights reserved. If you are reading this post at a site other than Bookfoolery and Babble or its RSS feed, you are reading a stolen feed. Email bookfoolery@gmail.com for written permission to reproduce text or photos.
Posted by Bookfool at 1:36 PM

Email ThisBlogThis!Share to TwitterShare to FacebookShare to Pinterest
Labels: all recommended, mini reviews