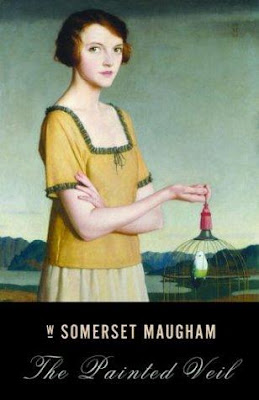 On the steamer that took them up the Western River Walter read incessantly, but at meal-times he endeavored to make some kind of conversation. He talked to her as though she were a stranger with whom he happened to be making the journey, of indifferent things, from politeness, Kitty imagined, or because so he could render more marked the gulf that separated them.
~p. 87 of The Painted Veil

This is going to be an extremely casual set of thoughts. I watched The Painted Veil, the movie starring Edward Norton and Naomi Watts, one night when Huzzybuns was out of either town or country or both, and then tore through my house looking for the book. It took me two days to locate the book, which I immediately read then followed up with a second viewing of the movie and then the BBC Radio 4 "Woman's Hour" radio production in 5 parts. The general storyline for book, movie and radio series:
Kitty has spent her youthful years toying with a procession of suitors without finding a single one of them appealing enough to marry. Now, her younger sister is marrying well and her mother asks, "How long do you expect your father to support you?" Kitty realizes she is not only considered a burden but also about to become a laughingstock because her younger sister will be titled and she will be "the cast-off elder spinster sister." She wants to go far, far away. Conveniently, Walter asks her to marry him and accompany him to China, where he works as a bacteriologist.
They move to Hong Kong (Shanghai in the movie) and two years pass. Kitty thinks Walter is boring and rude. He has a tendency not to reply to her because he's focused on his work and is not prone to chatter -- he's a very nerd-centric, science guy. She becomes captivated by Charlie, who is also married, and they have a steamy affair. In the book and BBC Radio 4 series (as I recall -- the radio series was only available online temporarily), they go to a room above a shop; in the movie the location of their trysts is unspecified but in all cases, they end up in Kitty's room on a day that Walter arrives home early. He turns the doorknob but the door is locked.
Walter doesn't pretend he knows nothing. He's already aware that Kitty finds him appalling, but now he's Majorly Pissed. Within a short time, he's decided to take a job working in a remote village where there has been an outbreak of cholera. He tells Kitty he'll leave her behind if Charlie will divorce his wife and marry Kitty immediately. Walter is not as stupid as Kitty thinks; he knows how Charlie will react. Off they go to Mei-tan-fu, where all but one of the Englishmen in town have died or fled. Will Walter succeed in killing them both, thus eliminating the wife he now hates and his own humiliated self?
This is how the movie begins: 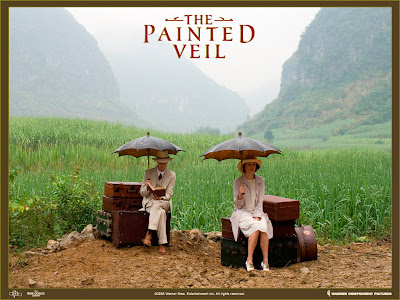 Walter and Kitty are sitting in the rain, nowhere near each other, waiting for their ride (which involves chairs carried by coolies). You can tell they hate each other, Kitty is angry, Walter doesn't care what she thinks; he's off in his own little world. It's perfectly portrayed in a stunningly beautiful setting. Flashbacks are utilized to tell the story up to this point, whereas the story is told in linear form in book and, I think, also in the radio series.
The three versions -- original novel, film and radio program -- are fascinating in their distinctions, but it may be a bit of a spoiler to say exactly how they differ, apart from noting that Kitty gains strength and character and learns to respect her husband in the movie and in the book she remains a simpering, frail, pitiful character to the end. Oh, and there are a lot of things added to the movie, obviously for cinematic effect. Most of those were good choices, in my opinion.
Want to know more about the differences? Keep reading, but be aware that this may be spoiler territory.
In the book, Kitty learns to respect her husband but continues to declare that she can never possibly love Walter. Kitty is a typical wimpy bitch heroine written by a popular writer of the time period (1920's - copyrighted in 1925) and disappointing in her lack of growth.
The movie and radio series were obviously written with modern sensibilities in mind. Women of today will not put up with a character who can't be bothered to learn from her mistakes and buck up. From respect for her husband's hard work and the love and care he shows to others, as well as her own hard work, Kitty loses her hard edge and learns to love. She develops a backbone where needed, softens in other ways. And, the love that develops between Kitty and Walter makes the story both romantic and tragic. But, honestly, I don't want to ever give everything away.
----End spoiler----
So, which version of The Painted Veil did I like best? Honestly? I enjoyed all three versions for different reasons but especially liked them in combination. I liked the beautiful scenery of the movie, Maugham's gorgeous writing in the book, the way the radio program brought the sound and sensations of the book to life with actors in roles (as opposed to the typical single-narrator/actor audio recordings, which I tend to detest), horses hooves clattering, bells chiming. But, I really do not like the ending of the book.
I thought Edward Norton, Naomi Watts and Liev Schreiber hit it out of the ballpark. Their characterizations were spot on, at first, then fit the changes made to the script (which made the movie version romantic). The average viewer who rated The Painted Veil at Rotten Tomatoes tends to agree with me. The radio show was different in minor ways but, again, apart from updating the female role to fit modern demands, it wasn't that far off from the book. In fact, it was closer to the novel than the movie. My one complaint about the movie was that there were a couple senseless jabs at Catholicism. I'm not Catholic, but I was a bit appalled by them.
On the second viewing of the movie, I took notes. At one point, Mr. Waddington (the only other Englishman in the village) says of the nuns who run the local orphanage:

"They're not just here to run an orphanage. They're turning these children into little Catholics."

Hmm. Not in the book. In fact, the nuns have nothing but the interests of the children at heart in the novel. They are not all orphans but by paying their parents a modest fee, the nuns are able to take in children who would be otherwise neglected, starved, possibly abandoned. And, then there's a little speech by Mother Superior, who compares her love of Jesus to a marriage:

"Over the years, my feelings have changed. He disappointed me, ignored me."

No, she doesn't say anything of the sort in the novel. She is a deeply committed believer who cannot be persuaded to return to her extremely wealthy family in France. Having made her decision when young, she still feels she has made the right choice and that China is where she belongs, regardless of the risks.
Other than those annoying changes, I thought the movie was pretty well done. Some lines are recognizably pulled directly from the novel. In one case, Mr. Waddington of the movie version is given one of Mother Superior's lines -- or, maybe it's the other way around. The movie is faithful enough and the ending is an improvement. Look, Walter and Kitty actually touch each other, late in the movie! 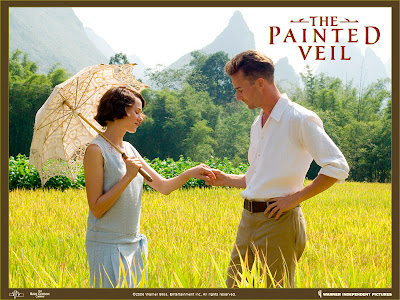 I think I had trouble with the fact that Kitty found her husband so repulsive partly because I like skinny, nerdy, science dudes. Heck, I even married one (although we have both since expanded . . . he sort of married a skinny nerd, too -- just a different kind). Walter is really quite a bit like my husband, in many ways: focused, smart, driven, quiet. I mentally chewed out Kitty, a few times. Silly old cow, can't you see what a decent guy you've got?
Book, movie and radio program all recommended - I don't know what it is about this story that I love, but I found the idea fascinating, the characters interesting and well-developed and the portrayal very beautifully done in both movie and radio show. The acting is really marvelous in both. Movie-wise, Edward Norton always amazes me, to be honest. I didn't even know who was playing Kitty till the credits rolled, but I was impressed with Naomi Watts, too. I think The Painted Veil is the first movie in which I've seen her. Kitty is disappointing in the book, but I love Maugham's writing and I suppose I can forgive him for not letting Kitty grow a bit more. Yes, I do believe I will. Forgiven.
Cover thoughts:
The cover shown above is the design on my copy, which was published in 2004 by Vintage International (a division of Random House books). I like it. The mode of dress and hairstyle are right for the time period. I don't recall if there's any scene with a bird cage in the book, but there is in the movie. Actually, that part's kind of weird. They took Waddington's love life and gave Kitty a couple of "Gasp!" scenes. Oh, and Waddington -- I love the actor who played him and found that he fit the description in the book very nicely.
In other news:
There will be a cat photo, soon. My recent reviews have been way the heck too long, so I'll keep the next post brief. Sound good to you? Happy Valentine's Day!
©2012 Nancy Horner. All rights reserved. If you are reading this post at a site other than Bookfoolery and Babble or its RSS feed, you are reading a stolen feed. Email bookfoolery@gmail.com for written permission to reproduce text or photos.
Posted by Bookfool at 12:38 PM