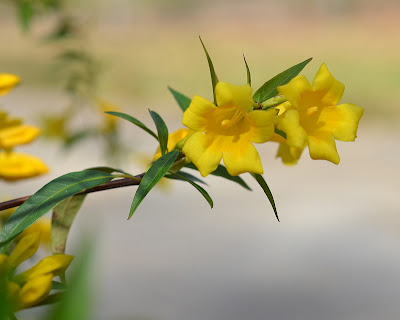 There is a stunning amount of blooming and budding happening in our area, so I did a little photography, this weekend. But, mostly I worked on cleaning. Or, at least that's what I call it. From the looks of things, I worked at making a very big mess. I dragged bins full of books out of a closet, you see. And, as I was going through them to do the regular purging chore, I kept getting sidetracked.
That always happens when I'm trying to purge. At any rate, I finished 5 books and I'm not going to write full reviews of them, so here's a brief run-down of each:

Fairy Tale Interrupted by RoseMarie Terenzio - A Memoir of Rose's time working for John F. Kennedy, Jr., beginning with her PR job and how she gradually got to know JFK, Jr. and his wife, Carolyn Bessett, then became his receptionist, personal assistant and friend while working at George magazine. As much a lovely tribute to the late Kennedy and his wife as a memoir about her work life and love life, Fairy Tale Interrupted is a quick, enjoyable read.
The only thing I disliked about Fairy Tale Interrupted was the litany of the perks that went with working for such a fabulously wealthy man and reading about the author's self-esteem issues. But, they're part of the story. They just interested me less than the famous couple and how Rose became close to them.

Paris, My Sweet by Amy Thomas - Another memoir, Paris, My Sweet is about the author's two years living in Paris, working in advertising for Louis Vuitton, biking the streets of Paris to seek out the best desserts.
Less a travel memoir and more a foodie journal, I didn't realize the emphasis on sweets would alternately make me feel queasy and droolish. The writing is light and fun, so I enjoyed it. I would have preferred to read more about her travels around Europe and less about all those desserts, though, even though her search for desserts was the whole point. Lesson learned. I think most foodie memoir lovers will enjoy this one and I do recommend it.

The Return of the Soldier by Rebecca West - The intro to Good Evening, Mrs. Craven compared Mollie Panter-Downes' writing with that of Rebecca West, her contemporary, so I'd been planning to read something by Rebecca West out of curiosity. Then, I happened to look at a pile of books and there was a Rebecca West, staring me in the face. At only 82 pages, The Return of the Soldier is a quick read but a powerful one. It is 1918. Chris has not written home from the front [WWI] for a fortnight and his cousin Jenny is worried but wife Kitty assumes he's fine because they haven't been contacted by the war office.
Then, an impoverished woman arrives at their fabulous estate with a telegram saying he's been injured and says she also received a letter written by Chris and sent from the hospital. He has suffered amnesia and his last memories are from 15 years ago. Margaret was the love of his life and it is she whom he has contacted. What happened to tear them apart? Why, upon his return, is he refusing to give in to the obvious changes in his life? If his memory returns, will he be sent back to the front? How far should the women go to ensure his safety? And, why did the war office not contact Kitty?
There is so much to this little book that I wish I had someone to chat with about The Return of the Soldier. It's fascinating.

Eloise by Kay Thompson - I found a copy of Eloise, the classic children's book about an active little girl who lives in the Plaza Hotel in New York City with her nanny, while cleaning. I'd completely forgotten how oh my Lord fun it is and had a grand old time re-reading Eloise. My copy is not an original but one I purchased when I was working at a bookstore. I need an excuse to buy the rest of the books in the Eloise series.

Corrie ten Boom's Prison Letters - Letters and notes (smuggled out with the help of a German officer) written during the time of The Hiding Place's author's first imprisonment at Scheveningen prison for helping Jews as well as the time spent with sister Betsie at Vught concentration camp. I believe The Hiding Place is about her time in Ravensbruck, where she miraculously was spared death due to a clerical error.
The letters came from both directions -- those written by Corrie and Betsie and those from family to the two prisoners. I can't read anything at all by Corrie ten Boom without tears and this was no exception. Besides being cold, starving, often ill and finding out that their father had died after only 9 days in prison, the biggest frustration for Corrie and Betsie was that so many people were not interested in listening to their message of hope (they were devout Christians). Deeply moving. My copy is a former library paperback with a pocket inside and yellowed tape holding bits of it together.
©2012 Nancy Horner. All rights reserved. If you are reading this post at a site other than Bookfoolery and Babble or its RSS feed, you are reading a stolen feed. Email bookfoolery@gmail.com for written permission to reproduce text or photos.
Posted by Bookfool at 4:58 PM