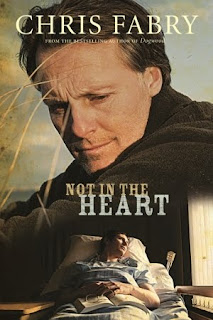 I've had a slow reading month and have not yet gotten around to reading Not in the Heart by Chris Fabry, which I was supposed to review for a tour, today. Fabry's June Bug was one of my favorite books in 2009, so I leapt at the chance to review and still do plan to read this book.
You can read a free chapter of Not in the Heart by Chris Fabry, here (my free chapter blog).
Summary of Not in the Heart from Chris Fabry's website:
Truman Wiley used to report news stories from around the world, but now the most troubling headlines are his own. He’s out of work, out of touch with his family, out of his home. But nothing dogs him more than his son’s failing heart.

With mounting hospital bills and Truman’s penchant for gambling his savings, the situation seems hopeless . . . until his estranged wife throws him a lifeline—the chance to write the story of a death row inmate, a man convicted of murder who wants to donate his heart to Truman’s son.

As the execution clock ticks down, Truman uncovers disturbing evidence that points to a different killer. For his son to live, must an innocent man die? Truman’s investigation draws him down a path that will change his life, his family, and the destinies of two men forever.

©2012 Nancy Horner. All rights reserved. If you are reading this post at a site other than Bookfoolery and Babble or its RSS feed, you are reading a stolen feed. Email bookfoolery@gmail.com for written permission to reproduce text or photos.
Posted by Bookfool at 6:30 AM

Email ThisBlogThis!Share to TwitterShare to FacebookShare to Pinterest
Labels: book summary and links