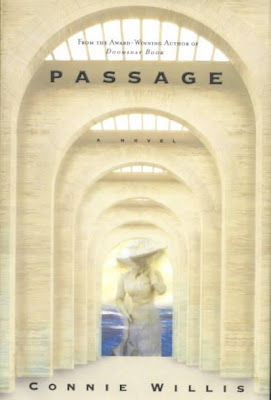 Passage by Connie Willis is a book that naturally follows Paranormal by Raymond Moody in the most extraordinary way. I'm still a little shocked that I just happened to pick up Passage and begin reading it almost as soon as I'd put down Paranormal.
In Passage, Dr. Joanna Lander, is a research psychologist studying Near-Death Experiences (NDEs). To gather material for study, she spends her time interviewing people who have just had NDEs. Maurice Mandrake, author of Life at the End of the Tunnel (fake title; Mandrake is a fictional character who appears to be patterned after Moody but lacking in scruples), is Joanna's bane. He works in the same hospital and the two are constantly racing to capture the stories of recent near-death patients. But, Mandrake has an agenda; he is convinced that there is a heaven and he uses leading statements to convince patients that they've seen things that prove there's a heaven.
Joanna pairs up with a neurologist named Dr. Richard Wright, who has come up with a way to chemically simulate NDEs and observe the patterns of brain activity while the simulated NDEs are occurring. But, when they find that Mandrake has contaminated their list of volunteers and realize they have a limited amount of time to come up with results in order to continue their funding, Joanna agrees to "go under" for the sake of keeping the research on track. And, where she travels is both fascinating and terrifying.
I'm not going to say much about where this book heads, plot-wise because I fear if I mentioned where Joanna travels during her NDEs, it would be a spoiler (although I figured it out pretty quickly), although I should mention that she doesn't technically die. On to love/dislike . . .
What I loved about Passage:
I loved the setting and details about the "place" to which Joanna is transported during her NDEs. Let's just say it's particularly apropos, this year. And, I love Willis' trademark eye for the absurdities of life. In Passage, the hospital is like a maze and I can relate to that. I once worked in a hospital that was very maze-like -- not to the extreme of the hospital in Passage, but it was definitely confusing. There is also a cafeteria that is almost never open, so Joanna frequently eats out of Richard's lab coat pockets, where he keeps a surprising stash of food and drinks.
Passage is also gripping enough that I read the nearly-800-pages in 3 days (that's fast for me). While it's not my favorite book by Willis, I still believe she can do no wrong. There is a shocking turn of events that totally threw me in the third section of the book. I was completely stunned; I may have even gasped aloud. It's well done and genuinely unexpected, totally changes the direction of the story and leads to a satisfying, if a bit eyebrow-raising, denouement.
I also liked the fact that, since the book is set in Denver, the author mentioned The Tattered Cover. Way to go, Connie Willis! I love it when an author has one of his or her characters mention a real-world bookstore if the setting is a genuine city, even just in passing.
What I disliked about Passage:
It could have been a bit shorter and less technical, I think. However, not being a scientist I can't say whether or not a lot of the yawn-worthy passages that included scientific detail (such as the following) were completely necessary:

Note that there's still a little humor inserted into a mostly-technical passage. The story is always entertaining, even if at times the detail can be a little heavy.
I'm going to put a spoiler passage at the end of this post. I don't think it's really all that spoilery, but it could mess with the experience for people who like everything to be a surprise, so I'll set it off with a warning. I'm going to even include a quote I love.
Highly recommended to fans of Connie Willis and those who like science fiction (emphasis on the science -- no time travel, outerspace, etc., in this one). It would be a mistake to avoid Passage because of its genre because it really is just a good novel that happens to have a scientific storyline. Great characterization, dialogue and storytelling, in general. I can never close a Connie Willis book without wanting to scrounge on my shelf for more.
I'll save recent arrivals for tomorrow. For now . . . the spoiler:
--------------WARNING! WARNING! WARNING! WARNING! --------------------
-----------------------------POSSIBLE SPOILER!!--------------------------------------
----------JUST SKIP THIS PART IF YOU'RE A WORRIER, OKAY?--------------
I just love this. When Joanna's brain is in near-death simulation, she finds herself on the Titanic. The question is . . . does everyone go to the Titanic when they die or was there some specific trigger that caused her mind to go there? If so, why does she keep returning to the same place? If you're a Titanic buff, you'll find it very fun reading the details as Joanna slowly makes her way around the ship. Here's a quote I loved which, I think, goes a long way toward explaining why I am fascinated by the Titanic disaster:

The lesson of the Titanic was that people kept on trying even when they knew it was hopeless--tapping out SOSs, cutting the collapsibles free, going belowdecks and bringing the mail up, letting the dogs loose-- all of them determined to save something, someone, even though they knew they couldn't save themselves.
~p. 719

END SPOILER - You may now pick up your delicate bone china cup with pinkie sticking out and make a "Hummph!" noise if you had no choice but to skip this part (or are offended that it was such a let-down).
©2012 Nancy Horner. All rights reserved. If you are reading this post at a site other than Bookfoolery and Babble or its RSS feed, you are reading a stolen feed. Email bookfoolery@gmail.com for written permission to reproduce text or photos.
Posted by Bookfool at 7:19 AM