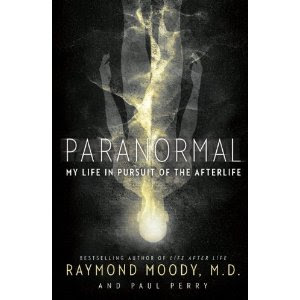 Paranormal is subtitled "My Life in Pursuit of the Afterlife," so that should have been a pretty big clue that I was about to read a memoir, rather than a lot of stories about what the author actually experienced, I suppose. But, I must admit I was a little surprised. I didn't realize it was going to be a memoir that went way back to his childhood and the reasons he got into researching life after death, among other things.
I almost gave up on Paranormal around page 25, but decided 25 pages was not enough of a chance, so I kept on reading and I must admit I got totally sucked in. Plus, Paranormal is well-written enough to make it a fairly breezy read; in the end, I read it in a single afternoon so finding that it was a little different than what I expected did not dissuade me from finishing the book.
Paranormal begins all the way at the beginning of Raymond Moody's life. The opening line:
I was born on June 30, 1944, the very day my father shipped out for World War II.
From there, we learn that the father Moody came to know was a changed man from the one who left in 1944. Of course, the author never knew the "before" version of his father, only the "after" -- the angry, uncommunicative man who made young Raymond a misery. His grandparents were the people he looked up to and it was a grandparent's death that made him wonder about death and whether it was really the end.
Unfortunately, you have to wade through a lot of annoying garbage about young Raymond's brilliance before you get to how he began to do his research, by whom he was mentored, the way he did his research and what he believes (the belief part is very vague, actually). All of which is very high in self-praise and peppered throughout with incidents caused by the medical condition he still is battling.
The book covers his research in life after death -- the subject for which he became famous, after the publication of his book Life After Life -- along with past-life regression (which he believes can be useful in healing people of illnesses, both mental and physical) and contact with the deceased.
What I liked about Paranormal:
I'm going to confess that I found the book fascinating but I am still a skeptic and I'm going to quote the author's use of the word "skeptic:

The truth was that I was a skeptic in the ancient Greek sense of that word ("one who goes on inquiring"). A skeptic in that fascinating ancient culture was not someone who was a naysayer -- as we think of skeptics today -- but rather a seeker who had decided not to reach a conclusion.
~p. 119, Paranormal

That works for me. I did like the way he described going about his research in a way that stopped "well short of declaring that I had discovered proof positive of life after death" and the fact that he refused to attempt to simulate a near-death experience, as in the movie Flatliners, in order to further his research.
I also liked the writing style -- easy reading. Fascinating as it was, I was rather glad that it was a quick read.
What I disliked about Paranormal:
I hate saying this because sometimes I have found that an author who sounds totally overblown is really quite a nice, down-to-earth person, but it's true that Raymond Moody comes off as very high on himself in Paranormal, at least during the first half of the book. I also found that, while it's important to the telling of his story in memoir form, the fact that he stated up front that he attempted suicide because of his medical condition and basically said, "but don't let that put you off what I have to say about my paranormal experiences" (my wording) . . . well . . . it put me off. It shouldn't, but it did.
However, that's small potatoes when compared to the way the book seemed to degenerate. Investigation of life after death without drawing a reasonable conclusion was one thing, but then he went on to past-life regression and I couldn't help thinking, "Any of those things he believes he experienced in past lives could have come from watching TV or movies, dreams he had, bits of conversation." The mind does some very strange things.
By the point that he began describing "crystal gazing" and the Oracle of Delphi, then told how he recreated the Greek caves and reflective surfaces that allowed one to chat with the deceased (by darkening a house and putting people in a closet with a mirror), he'd lost me. I thought he was nuts. I was doubly convinced when Moody described a trip to Greece to see the actual caves, where he spoke to Socrates. I had to flip back through the book to remind myself that there are also descriptions of "shared death experiences" toward the end. I think, by that point, I was just hurrying to get it over with, interesting as they were.
I think it's relevant to note that Raymond Moody's mentor was George Ritchie, the one person who claims to have had a near-death experience that I absolutely did not and cannot buy into. I read Ritchie's book around the time of my own mother's death (which was not completely devoid of the kind of experiences hospice workers warned us about -- she kept saying she wasn't ready to "go down that road") and it was a head-shaker.
So, perhaps I went into the reading of this book a bit over-the-top on the skepticism. I have, however, read quite a few books by people who claim to have had near-death experiences. And, I like to believe them. Some I can swallow, some I cannot. I am completely undecided; I am a skeptic in the Greek sense. Reading Paranormal, then, really did not change much. Except, you will not find me sitting in a dark closet with a mirror, trying to talk to a dead loved one. I'm convinced of that.
Recommended only to memoir lovers or those who are curious about Moody's research into near-death experiences, past-life regression, crystal-gazing and shared death experiences. Be aware that the book is primarily a memoir and most of the stories of experience are his own. Stories about the experiences of his subjects are brief. This book was not a favorite and I recommend it with hesitation, but I do think some people will enjoy it.
Cover thoughts: I don't get it. But, the cover is kind of cool. I am, however, outspoken about the use of nothing but black and white in covers. I think they tend to end up in the remainders. I cannot even begin to tell you how many black-and-white books we received when I worked at a store that carried almost entirely remaindered inventory.
In other news: My DVD copy of Downton Abbey, Season 2 arrived, yesterday! Very exciting, as it took me two weeks to figure out when Downton Abbey is aired, locally, and then we missed an episode because we couldn't get a signal (we don't have cable or satellite and the new-fangled digital signal is weather-dependent). Boy, they really dropped Lavinia and Sir Richard on us without much preamble, didn't they?
My only convincing ghost experience occurred in Farnham, England. I don't have any digital photos of Farnham, so you get a random photo from our last trip to the UK, which I turned black and white to fit today's unintentional theme (it's all the book cover artist's fault): 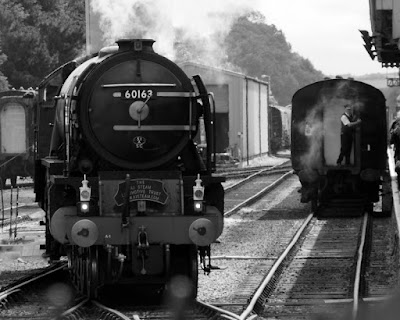 Makes you long for the good old days, doesn't it?
©2012 Nancy Horner. All rights reserved. If you are reading this post at a site other than Bookfoolery and Babble or its RSS feed, you are reading a stolen feed. Email bookfoolery@gmail.com for written permission to reproduce text or photos.
Posted by Bookfool at 9:44 PM

Email ThisBlogThis!Share to TwitterShare to FacebookShare to Pinterest
Labels: book reviews, foodie memoirs, HarperOne, NF, not a favorite, recommended to a limited audience