Empire of the Summer Moon by S. C. Gwynne 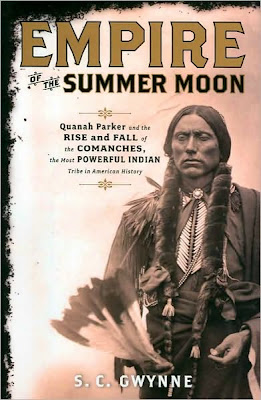 The Comanche male was thus gloriously, astoundingly free. He was subject to no church, no organized religion, no priest class, no military societies, no state, no police, no public law, no domineering clans or powerful families, no strict rules of personal behavior, nothing telling him he could not leave his band and join another one, nothing even telling him he could not abscond with his friend's wife, though he certainly would end up paying somewhere between one and ten horses for that indulgence, assuming he was caught. He was free to organize his own military raids; free to come and go as he pleased.
~p. 51, Empire of the Summer Moon

It took me forever to read this book because what you don't see in that excerpt about the Comanche male is that the lack of religion, law and rules of personal behavior meant that when they attacked other tribes or white settlers, Comanches were vicious to the point that they are among the few who, in retrospect, could truly be called "savage" without it being a racial slur. Seeing nothing wrong with torture (including that of babies), rape (heavily pregnant women and elderly women were not immune to rape and torture), scalpings and other horrors, young Comanches actually appeared to enjoy the cruelties they inflicted on their enemies. The details make for hard reading. Not everything about the book makes it miserable, though, or I would never have made it to the end.

So many raids were made by moonlight that in Texas a full, bright spring or summer moon is still known as a Comanche Moon.
~p. 65

When my book club discussed Empire of the Summer Moon, I wasn't able to attend. I'm sorry I missed the discussion. I was still only partway through the book because I had to keep setting it aside (although that's not the reason I didn't make it to the meeting). It kept occurring to me that the Comanche gang rapes -- which were often followed by murder, but not always . . . sometimes a woman would survive the initial attack, only to go through the same thing repeatedly -- could be classified as "sociopathic group-think run amok" [my wording]. These were not your sweet, passive Indians who were eventually shuffled off to reservations after giving in peacefully to numerous unfathomably ridiculous requests. The Comanches fought to the bitter end and in the nastiest ways imaginable. They fought to win and to drive people away. It worked for a very long time.
Quanah Parker was the last Comanche chief and part of Empire of the Summer Moon is his story, the story of the final people to leave their land behind and how he negotiated for his people and cleverly earned a fortune. But, most of Empire of the Summer Moon is dedicated to the history of the Comanches, how they lived and why they were able to ride for hundreds of miles without getting lost, how they defeated the Apaches, drove back the Spanish and stopped the white man's expansion into "Comancheria".
There's also plenty about Quanah's mother, the young white captive Cynthia Ann Parker. Although most everything that has been written about her either is very vague or involves a lot of assumptions because of what the author of Empire of the Summer Moon refers to as her "resonating silence" after she was retrieved from the Comanches, the author did an astounding job of gathering parallel accounts and information about various sightings of Cynthia Ann that help round out her story.
By the point of her liberation by whites, Cynthia Ann Parker had not only become a part of her Comanche tribe (with a completely different name) but was happily married to a chief and had three children. Her husband's death and the separation from her boys grieved her deeply. Cynthia Ann's story is a very sad one. Had she lived, I'm sure she would have been pleased with her only surviving child's leadership and kindness toward his people.
I could spend all day typing up quotations from the book because it is fascinating, well-written, informative history and at a glance I can see that I probably marked at least 25-30 passages. But, instead I'll tell you that if you're interested in Native American history, it's a must read. I've been on a bit of a Native American bent for the last couple of months and the first two books were highly critical of white treatment of Indians, as all books about Native Americans should be, in some way. But, Empire of the Summer Moon also shows the flip side -- the devastation and cruelty inflicted on white settlers by the uncivilized tribes.
As in any book of its kind, there is no escaping the horrors whites inflicted on Indians. They came, they saw, they conquered. But, author S. C. Gwynne gives you a good understanding of the rights and wrongs on both sides, the combined cruelty and idiocy of the young American government's decisions regarding our aboriginal people, as well as a glimpse into the reason hunter/gatherers eventually lose out to agrarian societies. Very engrossing stuff. I have two more non-fiction titles about Native Americans and a fictional account of Cynthia Parker's life (which I already know is in many ways wildly inaccurate) that I'm looking forward to reading, hopefully in the near future.
One of the things I really enjoyed about Empire of the Summer Moon was reading about various other tribes besides the Comanches, how they arrived in Indian Territory (aka, my home state, Oklahoma) and the wildly diverse camping grounds of the Comanches. Sometimes, I recognized the descriptions as places near my hometown. I miss Oklahoma, even 25 years after moving away, so it always gives me a buzz to read anything at all about "home".
I think this quote gives you a good idea of both the years of great change described and the quality of writing in Empire of the Summer Moon:

Much of what was left of [the Penatekas], starving and demoralized, limped on to a tiny reservation in 1855, despised even by other Comanches.
Only ten years before, such a thing would have been unimaginable. At the moment of the raid on Parker's Fort, the moment when a weeping Lucy Parker placed her terrified daughter on the rear flank of a Comanche mustang, the Comanches, and the Penatekas in particular, had been at the peak of their historical power and influence. They had defeated the Europeans, cowed the Mexicans, and had so thoroughly mastered the far southern plains that they were no longer threatened by other tribes. They had enough enemies to keep them entertained and supplied with a surfeit of horseflesh. But none to really worry about. Their source of food and sustenance, the buffalo, roamed the plains in record numbers and still ranged into every corner of Comancheria. The tribe's low birth rates virtually guaranteed that their nomadic life following buffalo herds was infinitely sustainable. Their world was thus suspended in what seemed to be a perfect equilibrium, a balance of earth and wind and sun and sky that would endure forever. An empire under the bright summer moon. For those who witnessed the change at a very intimate and personal level, including Cynthia Ann and her husband, the speed with which that ideal world was dismantled must have seemed scarcely believable. She herself, the daughter of pioneers who were hammering violently at the age-old Comanche barrier that had defeated all other comers, now adopted into a culture that was beginning to die, was the emblem of the change.
~p. 110

Empire of the Summer Moon was a finalist for the Pulitzer Prize, published by Scribner in 2010. Although it does bounce around in time a bit and can thus be a bit confusing, that and the fact that I thought the book could have used a glossary were my only complaints.
Highly recommended. An exceptionally written, extremely well-researched and revealing tale of American History, focusing on the Comanches and their downfall but including plenty of insight about other Native American tribes, the dangers to pioneers of the time period and the clueless handling of the Comanche "problem" by the young American government and its army. The Civil War and its impact on the frontier is also described. One warning: there is some very graphic description of violence in Empire of the Summer Moon.
Just walked in:
All Woman and Springtime by Brandon W. Jones and
Heading Out to Wonderful by Robert Goolrick -- both surprises from Algonquin Books
They also sent me copies of two books that I have tried and failed to get into, so I think I just won't mention them, although I may give one a second chance (the other got two chances but will not get a third).
Let's offset the Native American History glum with a bit of kitty fun: 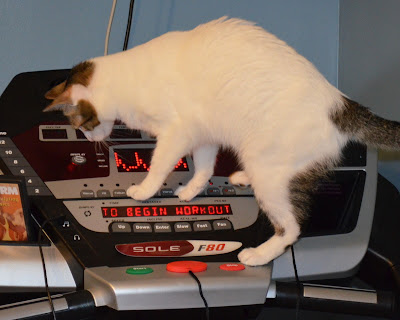 No, I did not let Isabel begin a workout. She gets enough working out, I promise you. Crazy cat. Happy Tuesday!
©2012 Nancy Horner. All rights reserved. If you are reading this post at a site other than Bookfoolery and Babble or its RSS feed, you are reading a stolen feed. Email bookfoolery@gmail.com for written permission to reproduce text or photos.
Posted by Bookfool at 12:26 PM