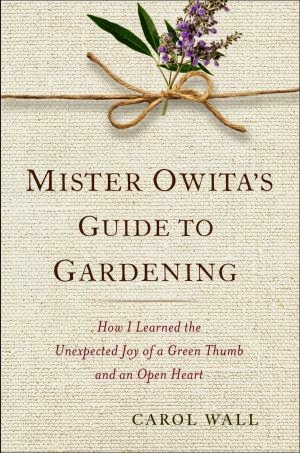 Mister Owita's Guide to Gardening by Carol Wall is subtitled "How I Learned the Unexpected Joy of a Green Thumb and an Open Heart." What I never expected when I opened the book was to read about a woman who disliked color in her yard. That struck me as bizarre, at first, but her reasoning is really quite fascinating.

Mr. Owita was a real person who has been given a fictional name for the sake of privacy. Not just a gardener but a man with professional knowledge, he was working at a local garden center and in the author's neighborhood when he came to her attention. Carol Wall asked her neighbor if she could possibly get Mr. Owita to work on her yard, as well. She admits that neither she or her husband had any skill or interest in maintaining their yard.

Mr. Owita had a past life in Kenya and a secret that didn't come out until the end of the book, although there are a lot of nervous glances and almost-confessions. I dislike such obvious devices but I was captivated by the charm of Mr. Owita and the openness of Carol Wall.  They became fast friends and, as she went through second and third rounds of cancer, she found Mr. Owita's attitude so upbeat, his willingness to listen so unusual, that she was able to speak freely with him about her fears while he was helping her to overcome one of them -- the fear of colorful flowers.

Because Mr. Owita's secret and the reason for Wall's fear of color are gradually revealed, I'm not going to give them away. I'll just say that I really enjoyed reading Mister Owita's Guide to Gardening, even though I often thought the dialogue (which she tried to recall with accuracy) felt contrived. So, the book wasn't the best-written memoir I've read but I loved learning about Mr. Owita, where he came from and how he ended up working in a garden shop and grocery store, his struggle to bring his daughter to the United States and the growing friendship between Wall and Owita and his family.  It's a lovely story and I got tears in my eyes more than once.

Recommended -  Mister Owita's Guide to Gardening is about friendship and beauty, about life and death and enjoying every moment. It's about how a kind, upbeat man who had every reason to be dismayed at the outcome of his life helped a woman deal with her fears and even overcome at least one of them.  It's beautiful. Although I tend to avoid anything and everything with the word "cancer" in it since my mother's death, I enjoyed Mister Owita's Guide to Gardening. I did, however, feel like the book had a slightly disingenuous tone.  Much as I liked the story, it also seemed awkward and forced, too heavy on devices like the "secret" that isn't revealed till the end. Because of that, I gave the book a 3.5/5 rating and I recommend it but it's not a favorite.

©2014 Nancy Horner. All rights reserved. If you are reading this post at a site other than Bookfoolery  or its RSS feed, you are reading a stolen feed. Email bookfoolery@gmail.com for written permission to reproduce text or photos.
Posted by Bookfool at 12:33 PM

Email ThisBlogThis!Share to TwitterShare to FacebookShare to Pinterest
Labels: Amy Einhorn Books, Carol Wall, memoir, recommended but not a favorite