Monday Malarkey - A collage of my week, the usual jazz and weekend movies

It took forever to find a way to save this collage of last week's events in a way that I could access it easily.  Please do me the favor of staring at it appreciatively for a fraction of a second. 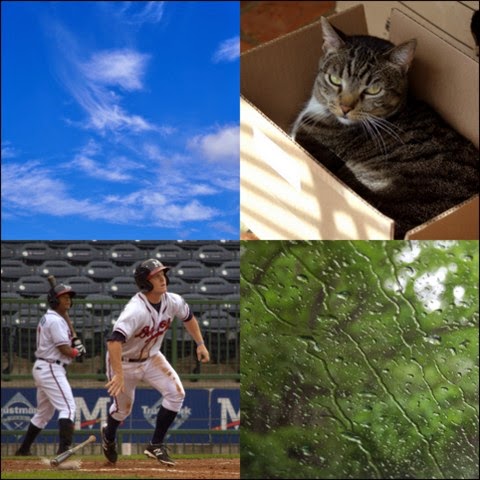 Thank you.  That was long enough. Well done, you.  Last week was a week of contrasts.  Floody rains, sunshine, more rain.  We went to a double-header baseball game, the first game having been rained out.  Although you see empty seats behind the batter in the collage, above, there were actually other people in the stadium, just not so many right behind home plate from the angle I was shooting.

The cats were hilarious, as always. Fiona and Izzy have nearly torn open the roof of their playhouse but it hasn't caved in, yet. Perhaps they desire a skylight?  At any rate, when one of them lies on top of the box, the roof is sagging. Fiona also occasionally worked on the "If it fits, I sits" concept, squeezing herself into a fairly small box and looking perfectly content.

I thought last week was going to be completely devoid of book arrivals when nothing had shown up by Saturday but Huzzybuns went to the old house to mow the yard and discovered a parcel sitting by the garage door.  Oops, need to update that publicist.  We're getting close to our 2-year anniversary in the new house (and praying we'll get rid of the old one by the time we reach the 2-year benchmark). 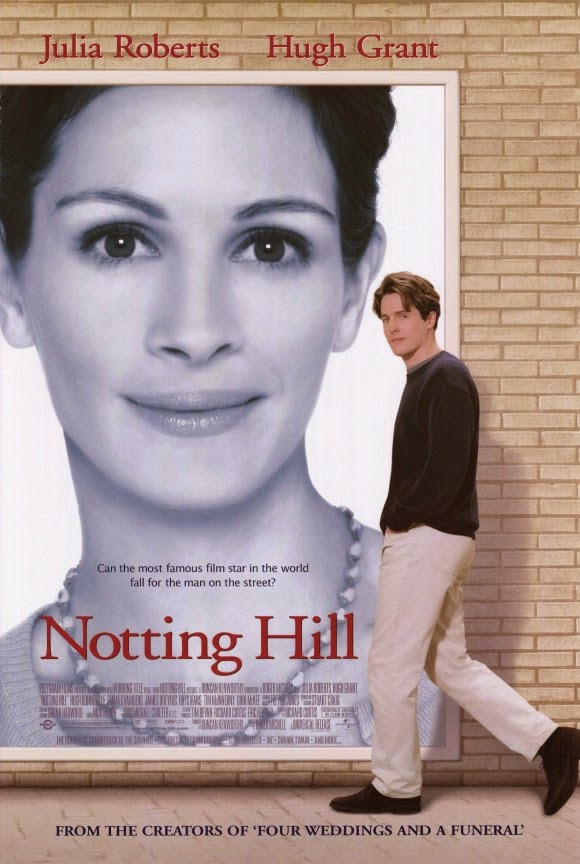 Notting Hill is one of the few romantic comedies my husband can stomach (possibly at least in part because it's set in London, our favorite city), so we keep it in the "family favorites" drawer of our entertainment center.  It's been a few years since we've watched it and it still holds up beautifully. The only things I noticed that have changed are phones (everyone used a landline), the fact that newspapers were more prevalent . . . and Hugh Bonneville's hair.  Actually, Hugh Bonneville was every bit as adorably awkward as Hugh Grant in Notting Hill, wasn't he?

It's hard to imagine an ensemble movie like Notting Hill working as well, today. Where do you go that people are actually sitting around doing nothing but chatting with each other at restaurants? Nowhere!  Every group has at least one person staring at some sort of electronic device. I've seen entire tables at which everyone is completely silent because they're all thumbing their iPhones. It's lovely to recall that not all that long ago people gave each other their full attention. 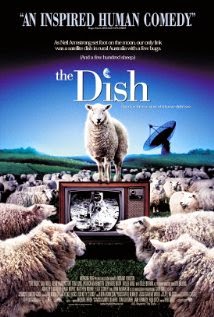 When people ask me what my all-time favorite movie is, I always tell them The Dish.  Most of the people I've mentioned it to, over the years, have been baffled because it's an Australian film. I'm not even sure how we found it in the first place, but The Dish is a comedy based on the true story of the Australian satellite dish that received and broadcast the signal sent during the Apollo 11 moonwalk so that people all over the world could watch man walking on the moon for the first time. The Parkes satellite dish was in the middle of a sheep paddock, hence the sheep watching the moonwalk on the cover at left.

Besides lovely comic timing and a pretty terrific cast (Sam Neill and Patrick Warburton), The Dish has a fantastic music soundtrack.  So does Notting Hill, for that matter, but I have a particular fondness for Sixties music.

I wanted to watch The Princess Bride, next, since we were watching some of our favorite comedies, but we didn't manage to locate our copy so next up was Romancing the Stone. 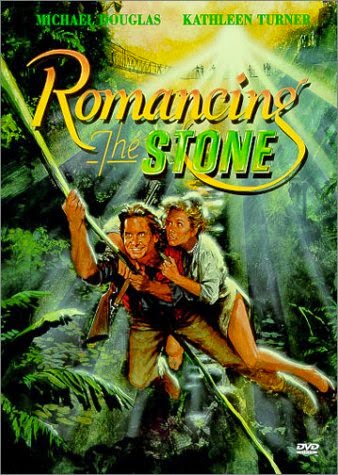 Ohmygosh, I had no idea Romancing the Stone is 30 years old!  But, there are landlines and a pay phone in the movie, and Joan Wilder types her romances on a typewriter, not a computer.  That tells you something, doesn't it?  And, I guess the hair is a dead giveaway.

Anyway, I was a little distracted and didn't pay as much attention to Romancing the Stone as the other movies we watched but, again, it's a movie that's held up beautifully. In all three cases, I found myself spitting out lines before the actors said them or reciting along with them.


Grogan: So, you can die two ways, angel: quick like the tongue of a snake, or slower than the molasses in January.
Joan Wilder: [voiceover] But it was October.
Grogan: I'll kill you, goddammit, if it's the Fourth of July!

Bwah-ha!  How can you not love that kind of writing?  Fun.  Now, I need to dig a little harder to find The Princess Bride.

Hope you all had a fabulous week!  Rain is moving in, again, as I type and I can hear the neighbor's outdoor cat howling.  I hope they bring him in before the sky opens up.  Happy Monday!


©2014 Nancy Horner. All rights reserved. If you are reading this post at a site other than Bookfoolery  or its RSS feed, you are reading a stolen feed. Email bookfoolery@gmail.com for written permission to reproduce text or photos.
Posted by Bookfool at 4:10 PM