The Good Question Series - books about the American West, Plants, the Senses, Butterflies, the Civil War, Our Planet and the Solar System by Carson, Sandler and Stewart 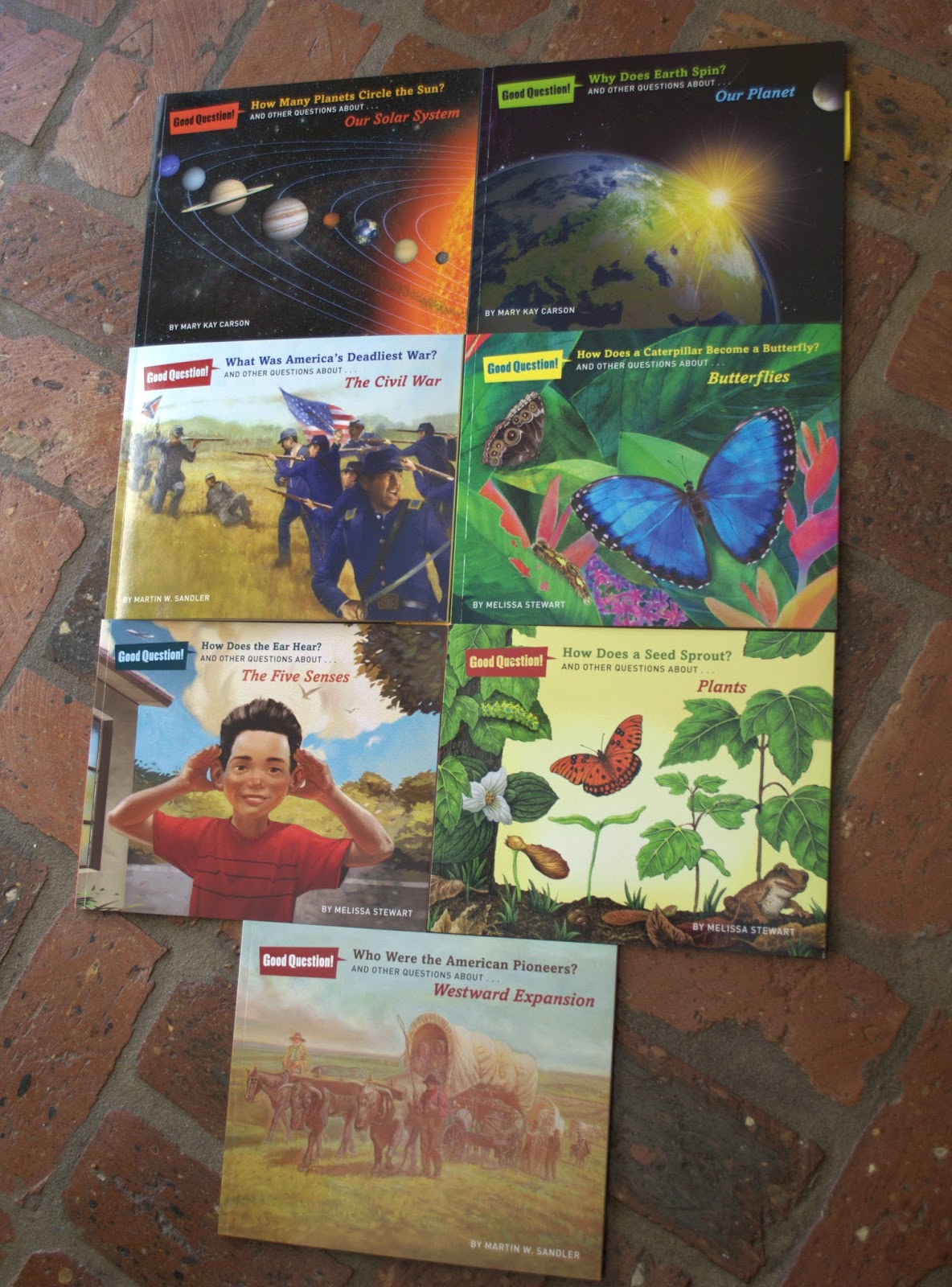 It took me quite a while to decide exactly how to handle reviewing this lovely little pile of question/answer books that were sent to me by Sterling Children's [unsolicited but appreciated!] but I've finally decided it's best to keep the entire Good Question series in one post and describe each book briefly.

In general, I tend to dislike Q/A books because they're self-limiting or seemingly random in the questions they address. The advantage to each of these titles is that they're focused on a specific topic. While I think some are better than others, I really did like this particular series because of the large illustrations and (in some cases) photographs.  The titles on Westward Expansion in the U.S. and the American Civil War have some gorgeous photographs that are crystal clear and large enough to really get a good look at the people and places. The illustrations are also large, colorful and clearly labeled. So, visually, the entire series is exceptional. 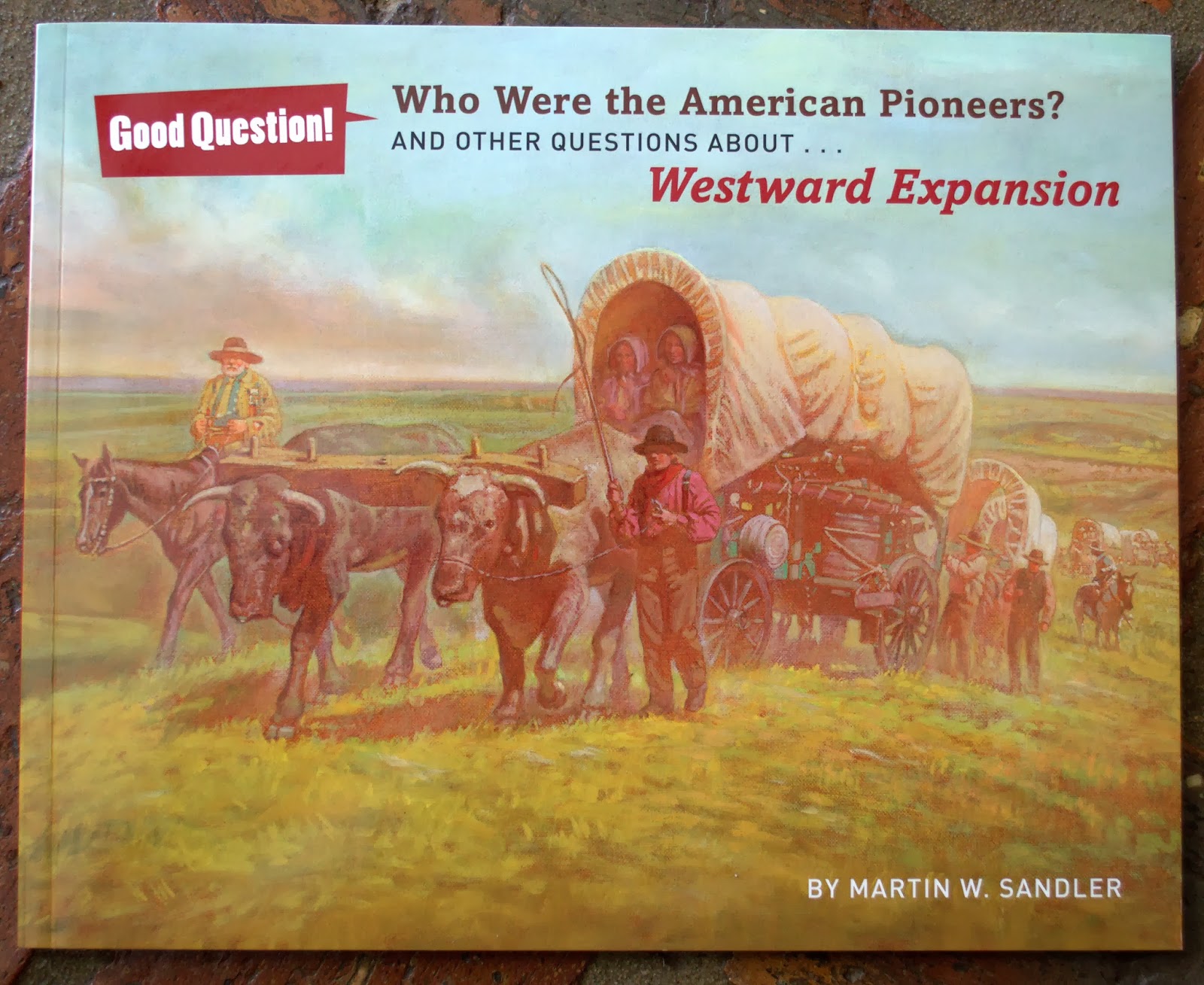 Who Were the American Pioneers? and other questions about Westward Expansion by Martin W. Sandler is gorgeous but I have to admit I was a little upset by the fact that it took quite a while before the author got around to asking a question about Native Americans and that was, "Why did Native Americans and Pioneers fight?"  It seemed to me that the first thing that ought to be asked was, "Were there people living in the West before European immigrants moved in?" However, when the topic was addressed, it was answered well and with respect toward the Native Americans, in my humble opinion.

Otherwise, Who Were the American Pioneers? was one of my favorite books from the Good Question series.  It has a few beautiful period photos: a log cabin, a sod house, children and their teacher in front of a one-room schoolhouse, a cowboy.  There is a map of various trails to the West Coast and a timeline. There's talk about the Pony Express and the railroad's contribution to expansion. 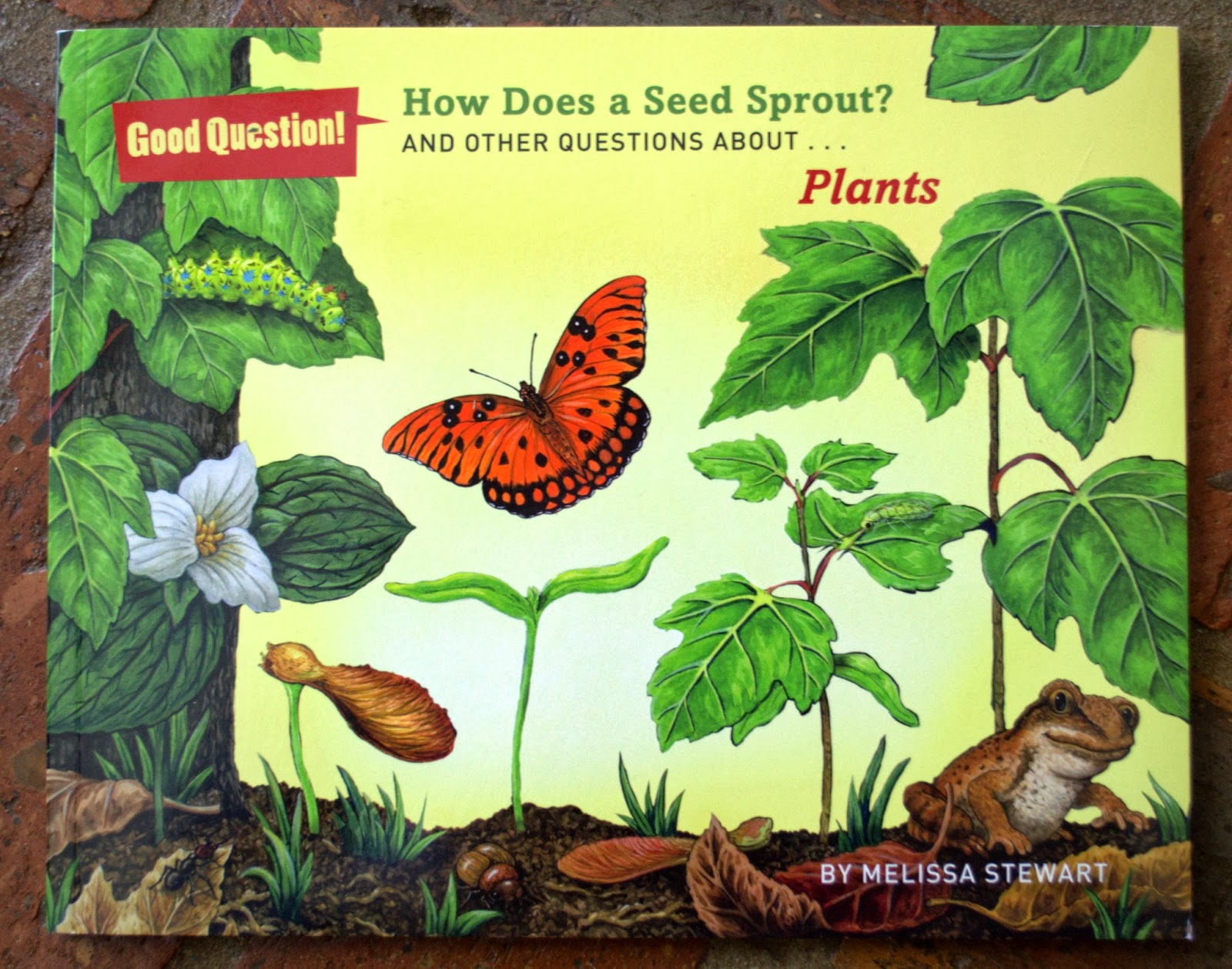 How Does a Seed Sprout? and Other Questions about Plants by Melissa Stewart is, again, a book with gorgeous illustrations and photos. I particularly love the full-page photo of a bird with tiny worms in his beak.

But, I had a problem with How Does a Seed Sprout? Instead of answering the questions in the first sentence and then elaborating upon them, I felt like I had to dig to find the answers. However, apart from that issue, the questions were answered well and I was reminded of a few things I'd forgotten about plants. I do think it would have been preferable to answer the questions clearly in a single, beginning sentence, first. My opinion. That was, as I recall, true of all of the books written by Melissa Stewart. 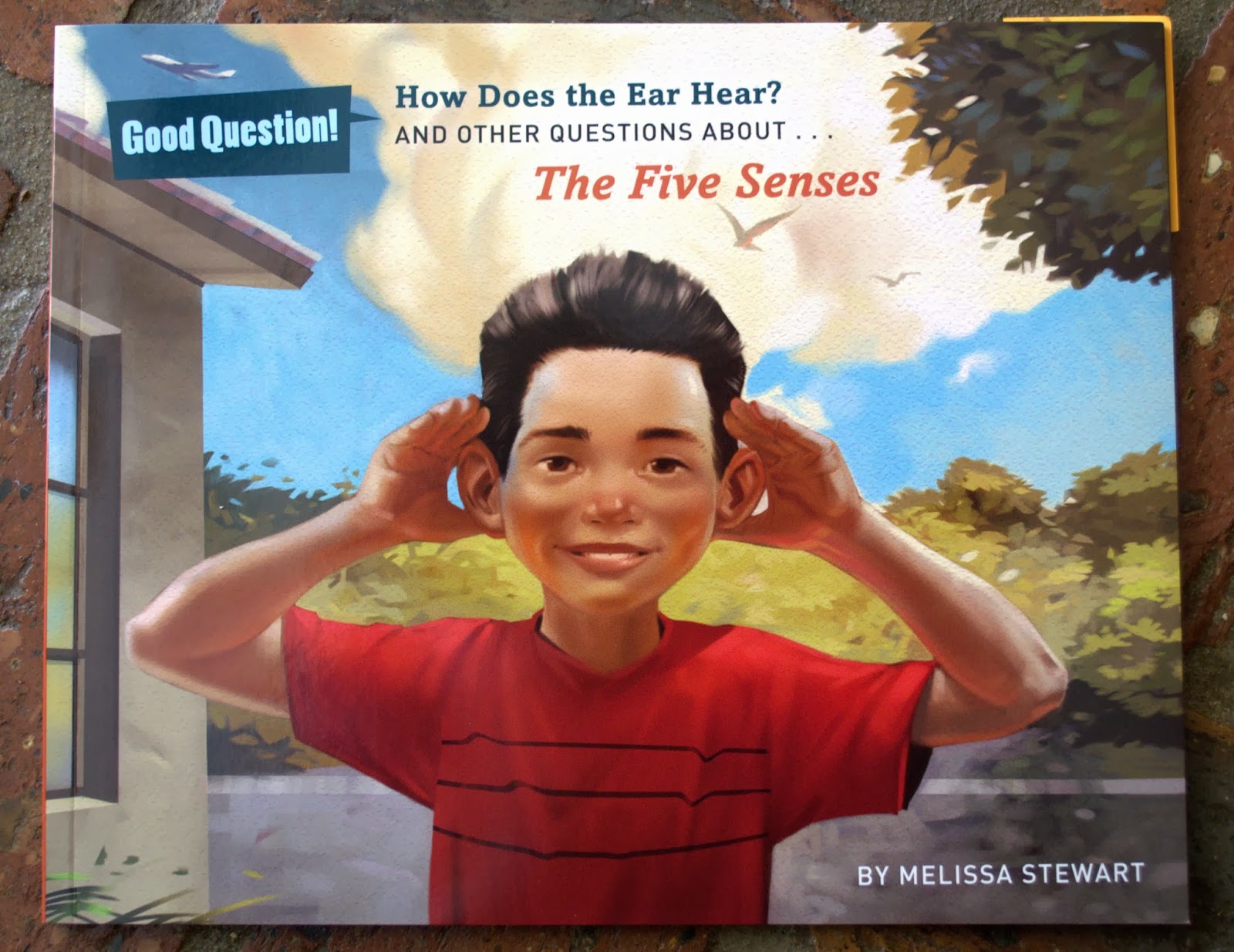 How Does the Ear Hear? and Other Questions about the Five Senses is another book by Melissa Stewart.  Oddly, I marked a page and can't figure out for the life of me why I did.  That tells you how long it's taken me to get around to writing about the book but perhaps I just liked the questions in that spread because from a glance, actually, I do.  One is, "What causes an itch?" and the other is, "Why can't you tickle yourself?"

I remember wondering about the tickling thing when I was young. On the negative side, allergies aren't mentioned as one of the causes of itching. Believe me, that's on my mind, right now. We're in the midst of tree pollen season and getting "high pollen" alerts daily. That's a petty complaint, though, as the author's answer to "What causes an itch?" is a broad one. 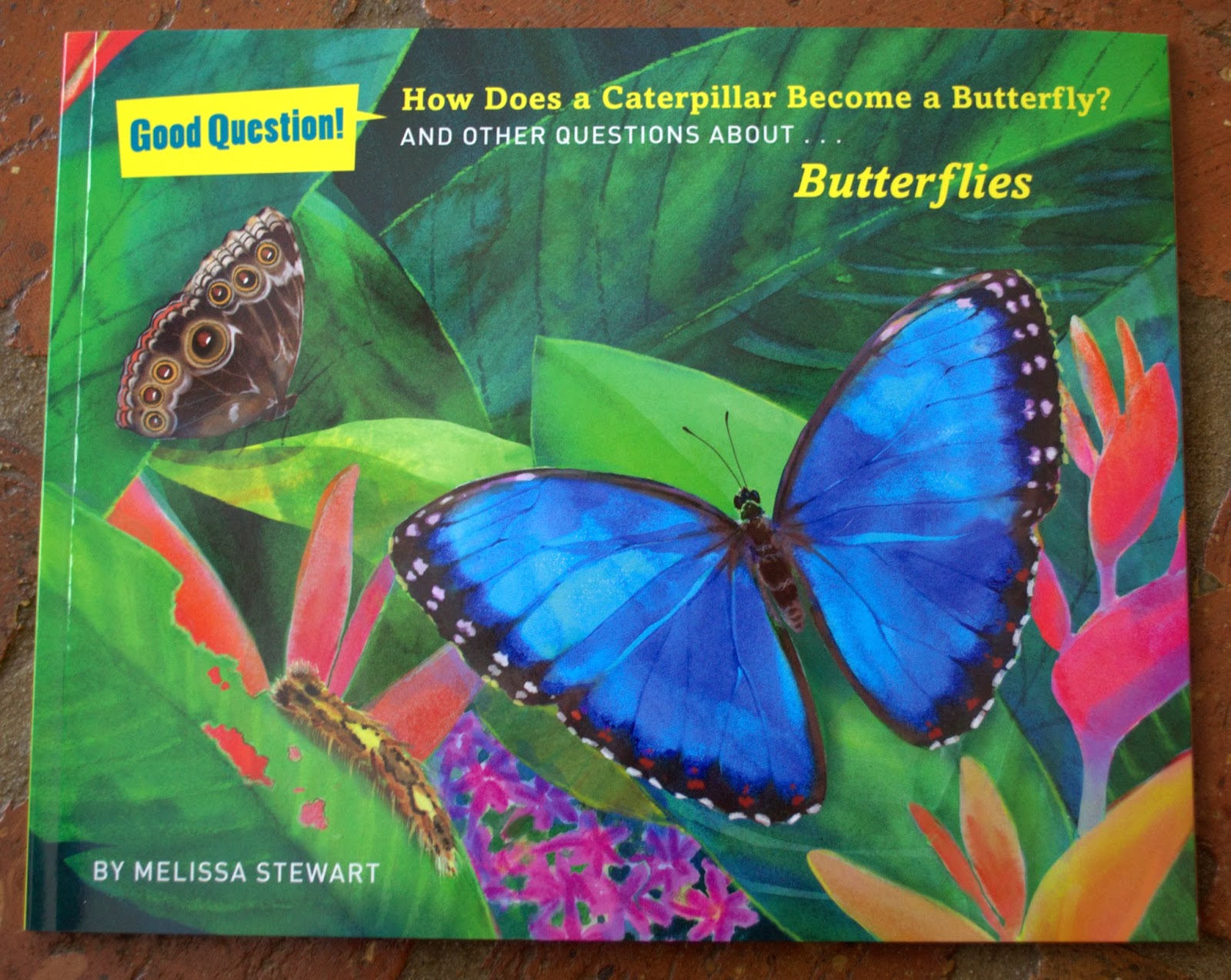 How Does a Caterpillar Become a Butterfly? and Other Questions about Butterflies by Melissa Stewart is one of my favorites. I read a book called An Obsession with Butterflies, a few years back, and I think I can safely say I'm not obsessed but I find butterflies fascinating and love reading about them. My favorite photo is a full-page photo of a luna moth (which I've had the privilege of seeing, long ago, on the bricks of my childhood home).  My favorite quote follows a list of 4 easy ways to tell the difference between moths and butterflies:

Have you heard that all butterflies have bright colorful wings? Or that all moths have brown or gray wings? Don't believe it. The next time you see a large-winged insect flitting through the air, don't look at its color. Think about the time of day.  Look at the insect's antennae and scales, and watch how it perches. Then you'll know if it's a butterfly or a moth.  ~p. 24 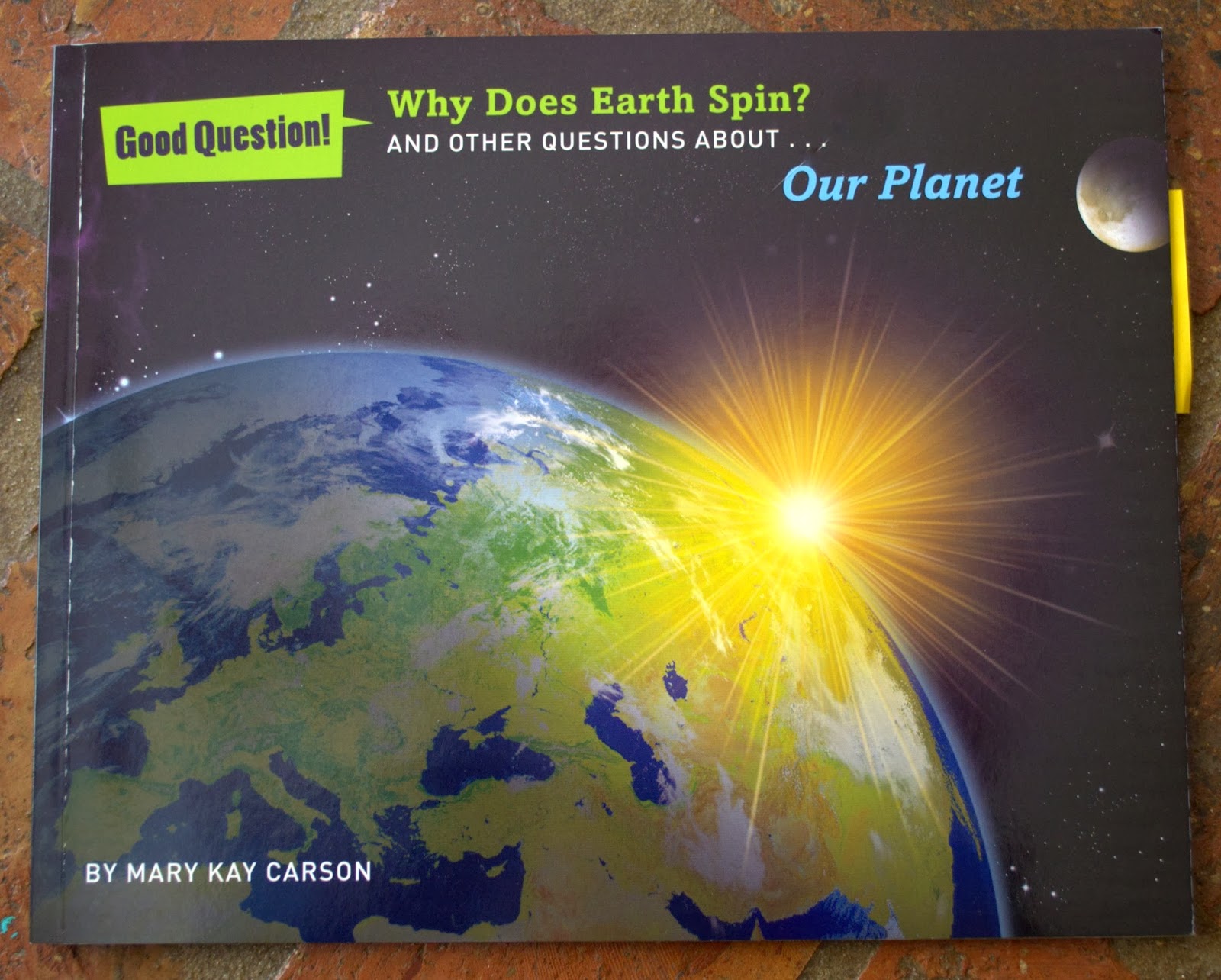 Why Does Earth Spin? and Other Questions about Our Planet by Mary Kay Carson describes all sorts of things -- weather, the layers of the planet, the reason for earthquakes, the layers of the atmosphere, the moon's importance to the earth. When I closed the book, I found myself thinking about the layers beneath my feet all day. You'd think I'd be beyond that, but I guess once you exit school and no longer have little kids to pummel you with questions, those things no longer tend to roll around in your head the way they used to.

Mountains are made by clashing tectonic plates. As plates shove into each other and up and over one another, rock is pushed up into a growing mountain range. ~p. 12

I would have liked to see something on the order of, "Sedimentation and carving from glaciers are also part of the processes that create mountains," just to keeping children from thinking the movement of plates is the singular cause of mountain range creation. 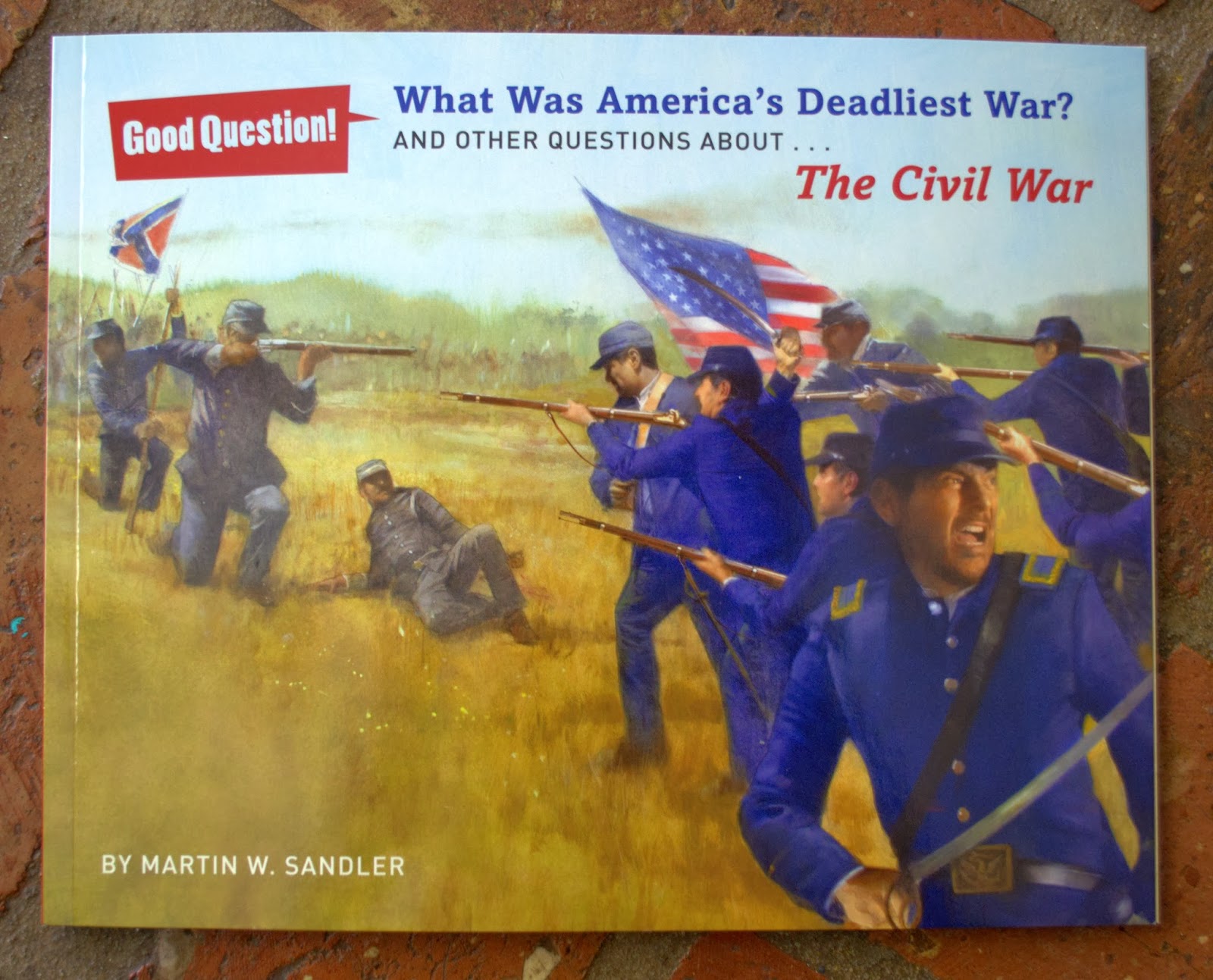 What Was America's Deadliest War? and Other Questions about The Civil War by Martin W. Sandler is a great example (and one of my personal favorites) of why the Good Question books would be well suited to use as jumping-off points for study units.  There's only so much you can squeeze into one tiny book, but if you're thinking about doing a unit on the Civil War in your classroom or at home, for example, or you're preparing to go on vacation to a city with a nearby Civil War site, the questions in What Was America's Deadliest War? will give you a nice general overview of the war and from there you can branch out.

What Was America's Deadliest War? does have one issue that jumped out at me: the author didn't mention Vicksburg, Mississippi's 43-day siege, one of the major turning points in favor of the Union.

On the plus side, right off the bat you learn some basic information like which states were slave-holding states, which were not and those that were divided. You get to see photos of soldiers (a full-page photo of soldiers standing beside a cannon and the many individual portraits are all wonderful), read about the Gettysburg Address . . . enough to pique a child's interest so he or she will want to learn more. 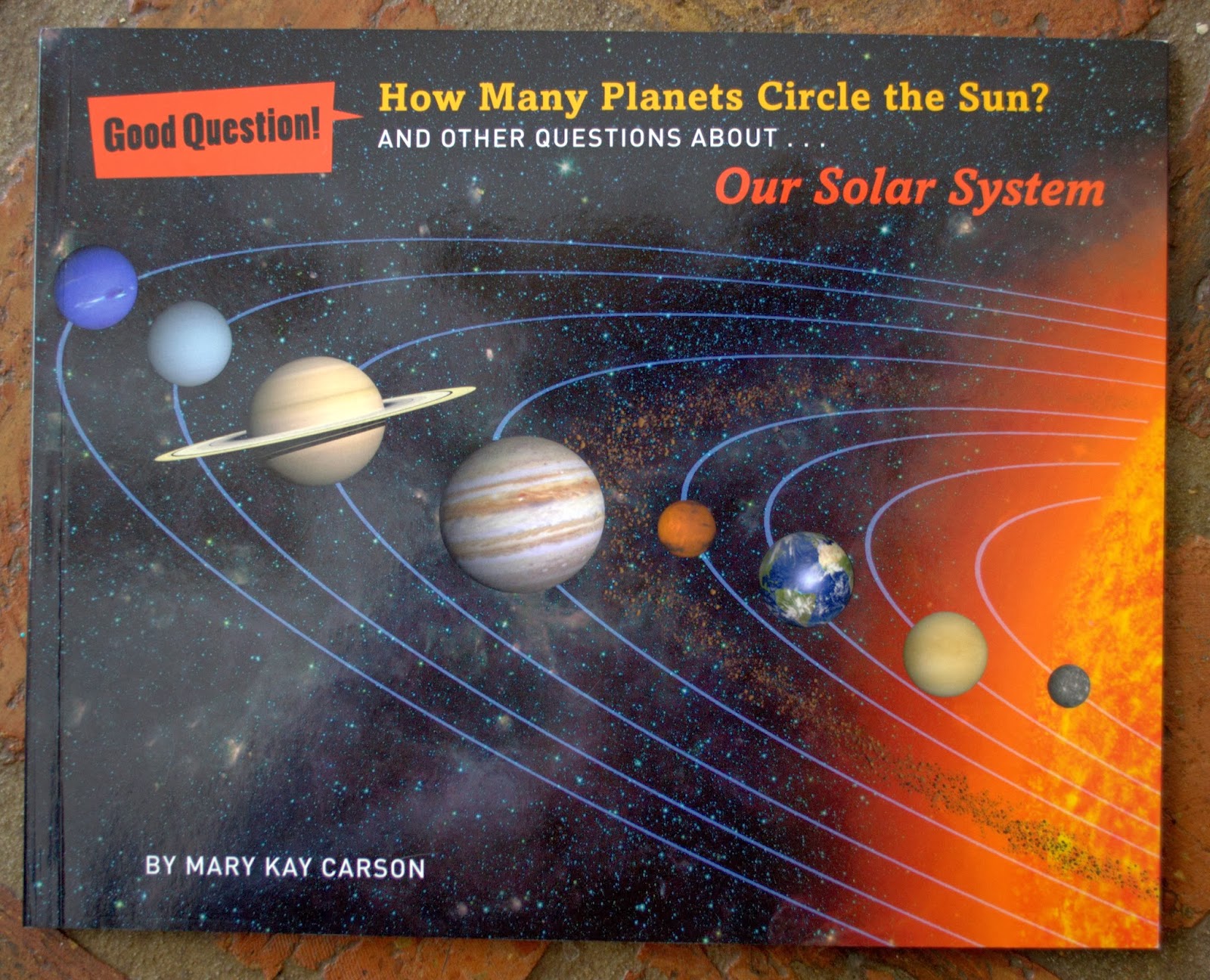 Last but not least is, How Many Planets Circle the Sun? and Other Questions about Our Solar System by Mary Kay Carson I've said more than I planned to say about all the other books so I'm just going to mention the one thing I loved about this book most: the illustrations. Some of the illustrations are so detailed and realistic that I stared at them and thought, "Wait, this is an illustration?" They are photographically detailed. Gorgeous, gorgeous. Seriously, one of the best things about the entire series, in general: the photos and illustrations rock.

I recommend them all. Some I like more than others but I really enjoyed reading all of the books in the Good Question series and I know my kids and I would have enjoyed reading them to see which particular subjects really grabbed the kids enough to go out and look for more information.

I received all seven Good Question books from Sterling Children's Book and will be passing them on to a local elementary school teacher. Hopefully, they'll get good use.

©2014 Nancy Horner. All rights reserved. If you are reading this post at a site other than Bookfoolery  or its RSS feed, you are reading a stolen feed. Email bookfoolery@gmail.com for written permission to reproduce text or photos.
Posted by Bookfool at 6:00 AM