I've decided to combine 50 Children and The Accidental Caregiver with Children's Wartime Diaries in one post because they have WWII as an element in common. 50 Children: One Ordinary American Couple's Extraordinary Rescue Mission into the Heart of Nazi Germany by Steven Pressman is about the rescue of 50 Jewish children from Vienna, Austria after the Anschluss (the peaceful but harrowing occupation of Austria by Nazis).  The Accidental Caregiver is a memoir about an actor who became one of several caregivers to an elderly Jewish woman who escaped Vienna, also after the Anschluss.  So, they have escape from the Nazis in common. The third book is mostly about children who were not so fortunate. Although they have the war in common, they're entirely different books.  I just thought it was very cool when I realized Maria Altmann, the elderly woman, was also a Viennese Jew, after reading 50 Children and then it occurred to me that this would be a perfect time to mention Children's Wartime Diaries. I love it when there's an unexpected tie between reads. 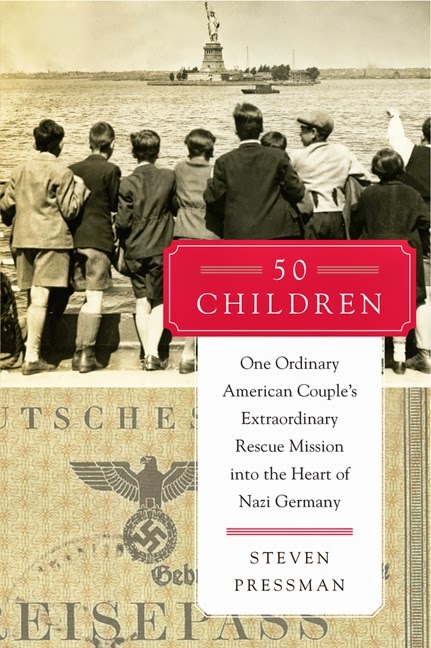 50 Children (an ARC received from HarperCollins) is one of the best-written and most surprisingly gripping books set during WWII that I've read in a while.

Gil and Eleanor Kraus were living a fairly quiet life in Philadelphia, Gil as a lawyer involved in charitable organizations, his wife a socialite who adored their two children. When Gil was approached by the head of a Philadelphia Jewish organization with the request to head up an effort to rescue 50 children from Nazi Germany, he said "yes" without even giving it any thought. Eleanor was heavily involved as she had to persuade a number of people to divulge deeply personal information necessary for the affidavits needed to prove that there were people able and willing to care for the children when they arrived in the U.S.

After the Anschluss, it became clear that children in Austria were at even greater risk so the origin changed but not the mission.

Gil, being a lawyer, realized that the only way the rescue could possibly occur during a time when immigration was strictly limited would be to stick to the letter of the law. Consequently, there's a great deal about the red tape, the detailed paperwork and the people Eleanor and Gil Kraus had to deal with. So, I was a bit surprised that I never found 50 Children dull.  Instead, I really found it quite gripping and beautiful but a little sad -- sad because not every child who applied for a spot could be taken, sad because the heads of other Jewish organizations who had failed to do similar were envious enough to speak out against them, sad because you can't read about those left behind without knowing the fate of the majority.

But, how beautiful the stories of the children themselves, told toward the end of the book, about how much fun they had during their summer together at a camp building and how lovely the reflections of the rescued children, now grown, still living.  And, how amazing that 3 Jewish adults (they were accompanied by a pediatrician, who actually fell in love in Berlin . . . that's a great story, as well) were willing to risk their own lives, going into Nazi-occupied nations to interview children and parents, dealing with paperwork and interviews to obtain visas, and then accompanying the children from Vienna to Berlin and onward to the U.S.

There is a photograph at the head of each chapter and my favorite is a photo of Gil Kraus reading to 4 of the children, with the following quote:

While the number 50 is but a small drop among the hundreds of thousands of lives yet to be saved, still in all each life is worth a world unto itself.  ~ Gil Kraus

Highly recommended - I get a little soppy just thinking about this book. It is a heroic tale, brilliantly researched and told in compelling narrative that makes the story feel quite tense, even though you clearly go into the reading knowing the outcome. 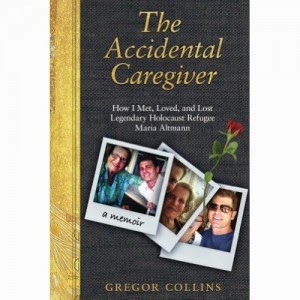 The Accidental Caregiver: How I Met, Loved, and Lost Legendary Holocaust Refugee Maria Altmann by Gregor Collins is not merely about an escape from Austria, although Maria Altmann's escape story is told. Rather, it's about how Gregor, an actor, became one of Maria Altmann's caregivers, his time working with her, and his journey abroad after her death.

When I was updating my progress reading The Accidental Caregiver -- a rare e-book purchase whose reading took me a few days because my iPad is crashing frequently -- I glanced across a few of the reviews at Goodreads and found that some people considered the author egotistical. I didn't feel that way at all, although there are moments that Maria humorously whips her head to the side to indicate that she wants to see Gregor's handsome profile.  Even when those moments happen, they're about Maria rather than the author.  At least, that's how I saw it.

Maria Altmann was in her 90s when Gregor Collins became one of her caregivers.  She was quite a feisty, vigorous woman but during the 3 years Gregor worked for her she went into a sharp decline and passed away. The author had dated a number of shallow women who confused him; he wasn't even sure what he was looking for in a woman.  But he fell in love immediately with Maria's fearless, happy-go-lucky, sometimes raunchy and definitely life-affirming ways.  Sometimes Maria could be a bit shocking but it's the fact that Gregor and Maria both felt an immediate rapport that makes the book such a joy.

Highly Recommended - I loved The Accidental Caregiver enough that I deliberately dragged out the reading a bit (aided by regular iPad crashes) and found both author and subject charming in their own ways. There are some misused words but I loved the light writing style and, no, I didn't feel like the author was uncomfortably self-centered. I gave it a 4.5/5 at Goodreads -- not much taken off for minor editing problems. The Accidental Caregiver is, after all, a memoir so it's not just about Maria Altmann but about the author's feelings about her as the author cared for her and then (briefly) his couch-surfing journey around Europe.  Loved it and wish I had the chance to know Maria. The book is currently being made into a film, which I hope will be widely released so I'll have the opportunity to see it. Children's Wartime Diaries: Secret Writings from the Holocaust and WWII, ed. by Laurel Holliday, is a book I've meant to mention and which ties in to the other two books pretty well.  It's a set of diaries (some complete, others partial) written by children during the Holocaust.  I have the full versions of some of them on my shelves.

I read Children's Wartime Diaries a couple months ago.  The surprising thing about the writings in Children's Wartime Diaries is that most of them (with only a couple exceptions) are every bit as well-written as Anne Frank's diary.  Some are even more jaw-dropping. Such skilled writing from children so young!  Many of the children died, their writings retrieved later by a friend or relative, so it's a heartbreaking read and the cruelty they experienced is . . . well, it leaves me speechless just to think about what some of them endured. Two diaries written by British youngsters lend a little levity to the book (those two are both on my shelves in complete form) although they do eventually begin to feel the full impact of war on their own home turf.

Again, highly recommended - Surprisingly mature writing in most cases but definitely a rough read because of the horrors experienced by the children who wrote the entries in this book. I cried a lot while reading Children's Wartime Diaries but at the same time I was mesmerized by some of the writing. There were only a couple excerpts that were simplistic enough to feel as if they matched the age of the writers. If you were captivated by Anne Frank's diary, you really must try to find a copy of Children's Wartime Diaries.  I bought my copy secondhand and I'm pretty sure it's no longer in print, but there were plenty available. Prepare to have your heart broken if you do chase down a copy.


©2014 Nancy Horner. All rights reserved. If you are reading this post at a site other than Bookfoolery  or its RSS feed, you are reading a stolen feed. Email bookfoolery@gmail.com for written permission to reproduce text or photos.
Posted by Bookfool at 3:09 PM