Happy Monday!  We had an interesting weekend - so stormy (as in deluge with a lot of crackBOOM noises) from late Saturday night till late Sunday that we opted to stay safe at home doing exciting things like laundry and sleeping, although fortunately we did manage to sneak in a local baseball game before the inclement weather arrived.

I'd hoped to curl up and do some reading on Sunday but every time I tried, I fell asleep. Some days are like that.  We also watched a couple movies. More on that in a minute.  From the new arrivals, which included copies of The Last Policeman and Countdown City, I made my own little asteroid preparation kit, which includes duct tape, a flashlight, a bottle of water, a respirator and a towel, in addition to the two books: 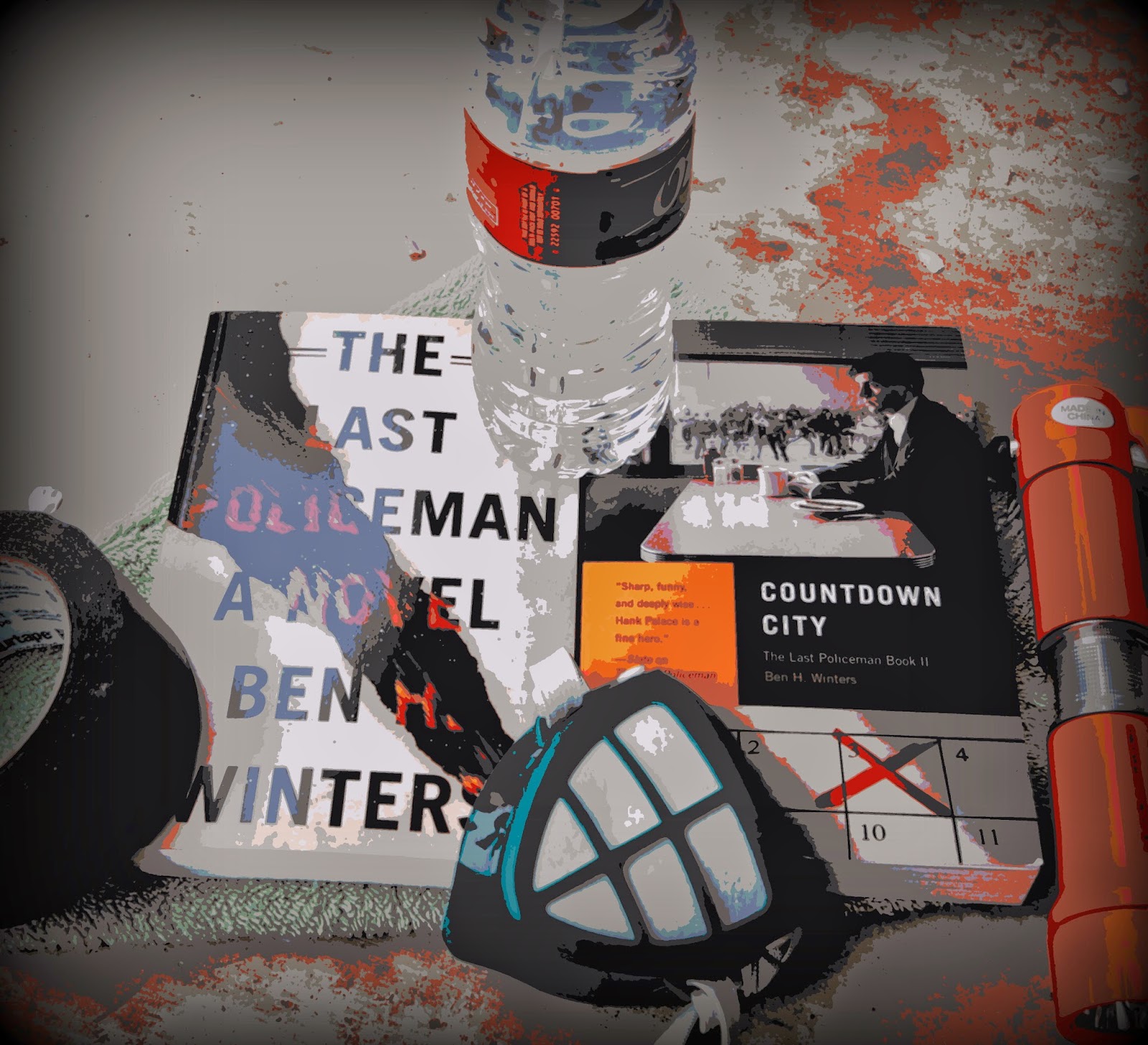 I am now officially prepared for a fictional apocalypse!  Note that with one bottle of water I'm not likely to last long but I'm sure the books would keep me alive for a while and, although this is an entirely different fictional probability, I do have a towel in case of the potential for hitchhiking on passing spaceships. I've read both of the Last Policeman books, already, and they're pretty exciting, by the way -- hopefully, I'll get Countdown City reviewed, this week.  Thanks to Eric at Quirk Books for the laugh. 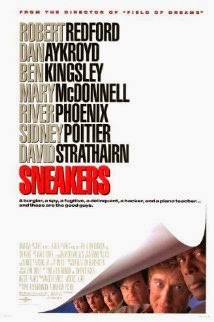 We've recently unpacked some boxes of DVDs so we're digging through the DVDs whenever we feel like watching a movie. 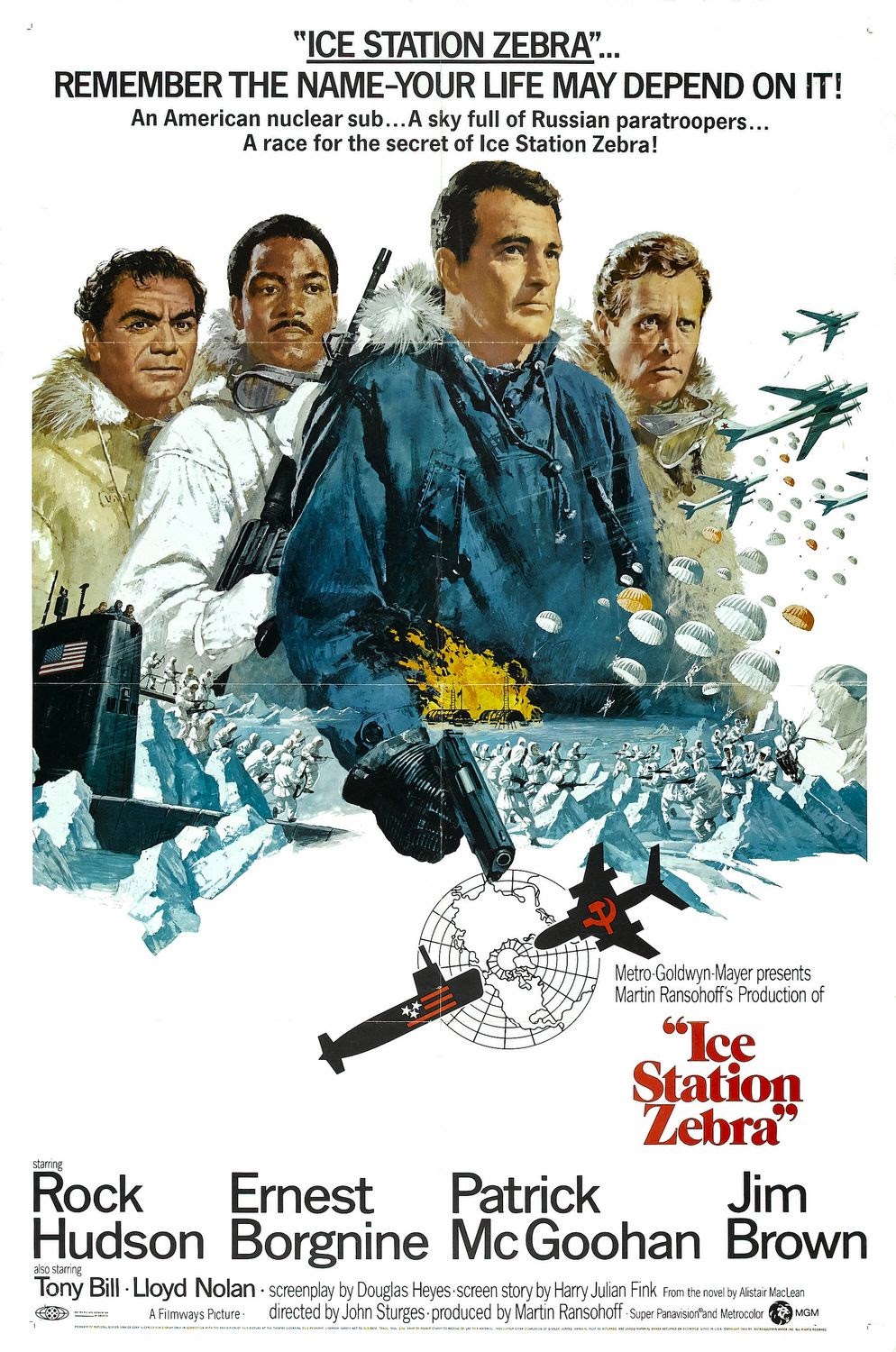 Sneakers - A delightful caper with an all-star cast: Robert Redford, Sidney Poitier, the late River Phoenix, Dan Ackroyd, Ben Kingsley, David Strathairn, Mary McDonnell.  Seriously, this film (released in 1992) could not have a better cast. It has held up beautifully. In spite of the fact that the idea of an unbreakable code is pretty much laughable, now, and a code-breaking master machine kind of silly, the story is still a good one and much less cheesy and overblown than more recent caper movies, in my humble opinion.  In other words, I still love it.

Ice Station Zebra is the 1968 movie based on the book Ice Station Zebra by Alistair MacLean - which I read and reviewed, last year.  We were a little stunned when we started up the movie and got a still shot of a submarine with the word "Overture".  I turned to my husband and said, "Are we being seated in the theater?" He shrugged. I assume that was the purpose of the overture, which was a lengthy one.

Ice Station Zebra is another movie with a pretty terrific cast: Patrick McGoohan, Ernest Borgnine and Rock Hudson are the stars. I'm not familiar with Jim Brown but it appears he's an early "sports hero turned actor".  I'm not so impressed with him but I love the fact that the movie is understated. Even when exciting things are happening, there's no shouting of goofy commands that you know you wouldn't hear in real life. Instead, everyone seems quite professional. It seems a lot closer to reality than anything we'd see today, but that's just a guess.

One thing that really stands out is the fact that all the main characters smoke . . . on a submarine.  That had to get nasty. We got to the point at which the submarine (after being sabotaged and nearly sinking) successfully punched through the ice and a team was readying to hike 3 miles across the ice to get to the damaged station. And, then the word "Intermission" popped up.  It's a long movie and it was getting late, so we opted to stop the show and watch the rest, later.  So far, I'm really enjoying it, though, and so is the top of my husband's head (he played on his tablet the entire time).

That's pretty much my week in a nutshell. How was yours?

©2014 Nancy Horner. All rights reserved. If you are reading this post at a site other than Bookfoolery  or its RSS feed, you are reading a stolen feed. Email bookfoolery@gmail.com for written permission to reproduce text or photos.
Posted by Bookfool at 2:10 PM