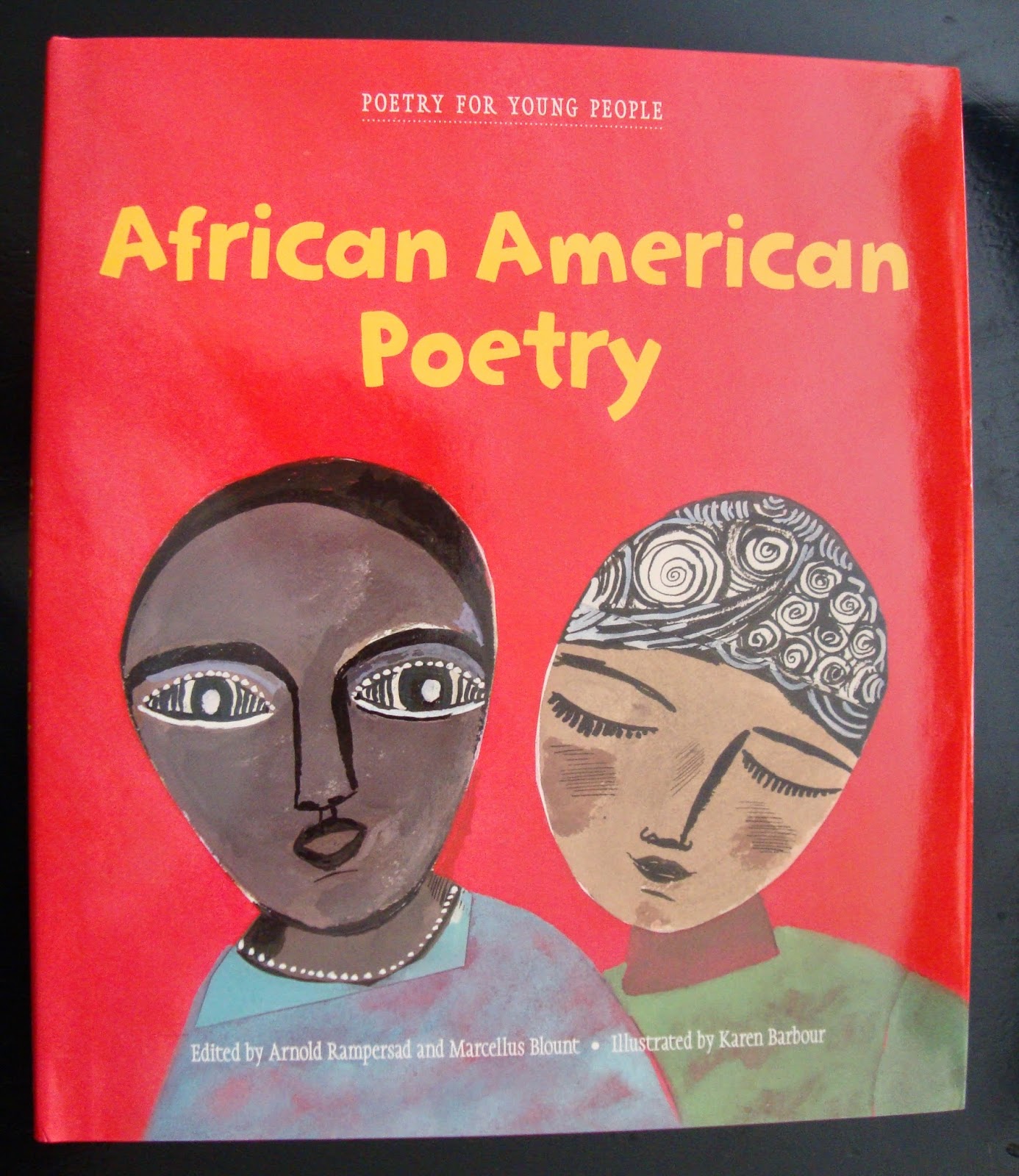 I was totally excited to see an anthology of African American Poetry in the envelope Sterling sent me because I enjoy passing on children's books to schools and my youngest son's girlfriend is currently teaching in the Mississippi Delta, where the children are mostly African American and resources are appallingly limited. They can use any book but I think this one will be especially meaningful to the children.

Poetry for Young People: African American Poetry is worth buying for the introduction alone, as it is truly eye-opening. Editor Arnold Rampersad (from Princeton University) beautifully describes the history of African American poetry, its influences (poverty, slavery and racism as well as everyday life), its writers and how some were able to write as early as the years of slavery, even though teaching a slave to read was against the law. I loved the learning experience as well as the poetry itself.  I had no idea, for example, that a volume of poetry by an African American (Poems on Various Subjects, Religious and Moral by Phillis Wheatley) was published as early as 1773.

The editors have done a fabulous job of selecting poetry and placing it in chronological order, earliest to most recent. The illustrations are bold and colorful but I must admit I didn't love them. They remind me a little of both Eric Carle and primitive art but they're a little flat for my taste, yet definitely well-suited to the individual poems. "Apollo", shown below, is one of my favorite poems. This is not my favorite spread for illustration but the one I liked best didn't turn out -- the battery died on my camera and I had to use a lower-quality camera. Will try to replace the image and update later; there are definitely better examples of the illustrations. 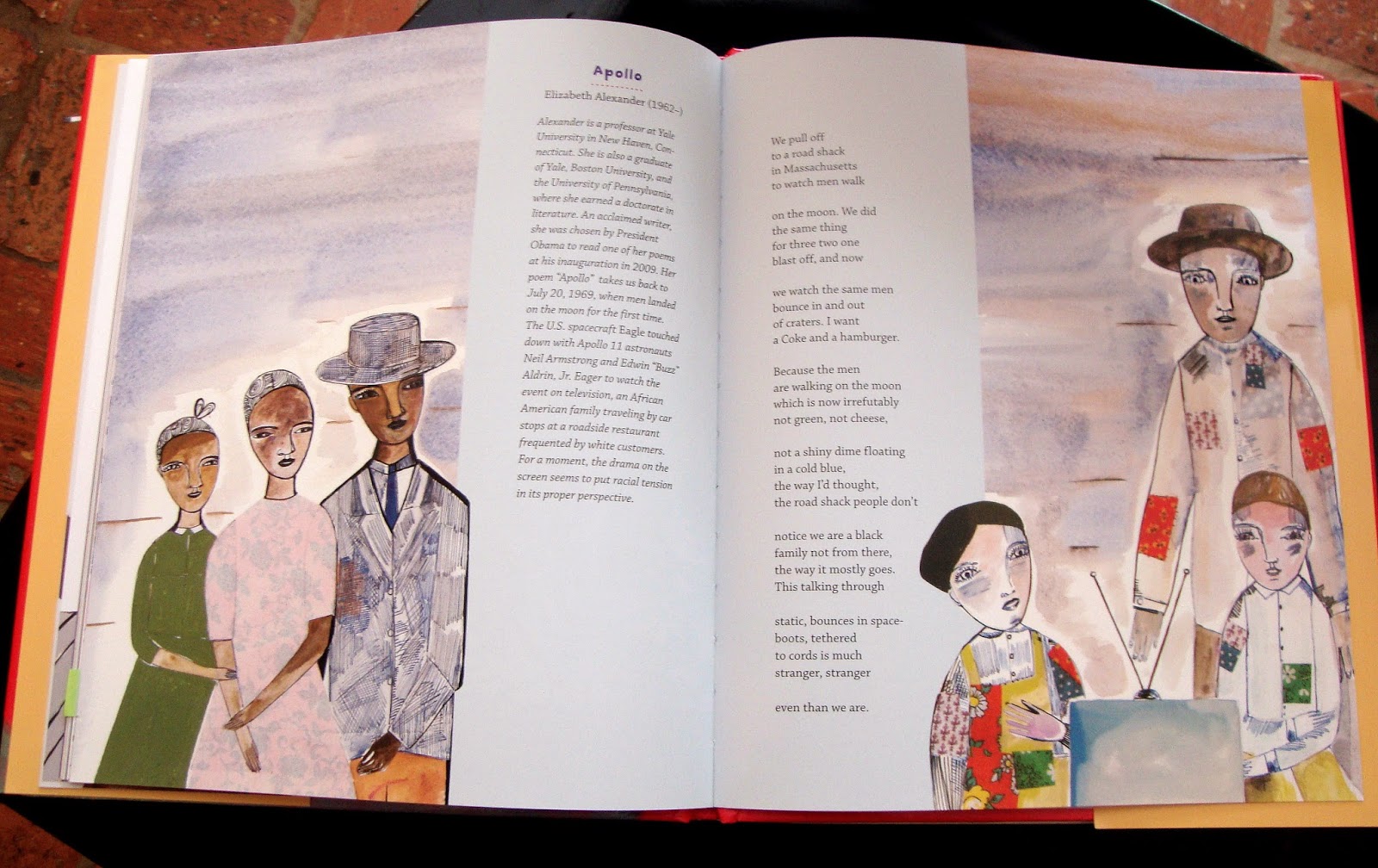 The intro to "Apollo":

[Elizabeth Alexander] is a professor at Yale University in New Haven, Connecticut. She is also a graduate of Yale, Boston University, and the University of Pennsylvania, where she earned a doctorate in literature. An acclaimed writer, she was chosen by President Obama to read one of her poems at his inauguration in 2009. Her poem "Apollo" takes us back to July 20, 1969, when men landed on the moon for the first time. The U.S. spacecraft Eagle touched down with Apollo 11 astronauts Neil Armstrong and Edwin "Buzz" Aldrin, Jr.  Eager to watch the event on television, an African American family traveling by car stops at a roadside restaurant frequented by white customers. For a moment, the drama on the screen seems to put racial tension in its proper perspective.

And, the poem (in case you can't view it by enlarging):

on the moon. We did
the same thing
for three two one
blast off, and now

we watch the same men
bounce in and out
of craters. I want
a Coke and a hamburger.

Because the men
are walking on the moon
which is now irrefutably
not green, not cheese,

not a shiny dime floating
in a cold blue,
the way I'd thought,
the road shack people don't

notice we are a black
family not from there,
the way it mostly goes.
This talking through

static, bounces in space-
boots, tethered
to cords is much
stranger, stranger

even than we are.

Highly recommended - A fabulous anthology with an exceptionally informative introduction, a great selection of poetry, terrific intros to each poem and some vocabulary words.  My only quibbles with Poetry for Young People: African American Poetry are minor. I thought a couple of the definitions were good descriptions of the author's meaning without strictly defining in a dictionary sense. The fact that they weren't dictionary definitions bothered me a tiny bit but that choice is arguably correct because usage trumps definition in poetry. While he illustrations are not a style I like all that well, I do love the eye-popping color. Another great book for teaching, I think it would be especially wonderful to use as a reference during Black History Month because, being an anthology, it goes beyond talking about the better-known poets. I've heard some complaints from youngsters about having to study the same African Americans over and over, again, during their years of schooling. Variety is a very fine thing.


©2014 Nancy Horner. All rights reserved. If you are reading this post at a site other than Bookfoolery  or its RSS feed, you are reading a stolen feed. Email bookfoolery@gmail.com for written permission to reproduce text or photos.
Posted by Bookfool at 3:03 PM