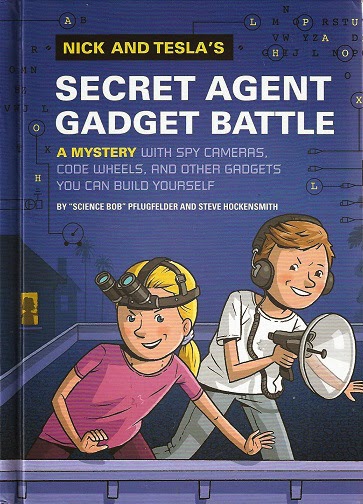 Nick and Tesla's Secret Agent Gadget Battle is described on the cover as "A mystery with spy cameras, code wheels and other gadgets you can build yourself."  It's the third in the Nick and Tesla series and, so far, my favorite.

In Secret Agent Gadget Battle, Nick and Tesla receive a partial message from their mother, telling them they're in danger from a spy.  Tesla is relaxed and calm about the message, thinking of ways she can try to identify the spy while Nick's imagination runs wild, everyone around him suddenly appearing to be a threat. With a repairman, two house cleaners and an assistant to Uncle Newt in the house, there are plenty of potential spies to eliminate. When Tesla's pendant goes missing, the kids become serious about figuring out which of the invaders is the spy.

Using code wheels, spy cameras, Nick's own pendant (to tempt the spy-slash-thief) and fingerprint powder, Nick and Tesla work to figure out who is spying on them and eliminate the danger to their lives.

Highly recommended - While the writing in the Nick and Tesla series can be grammatically awkward at times, I love the books for the adventure, the humor and the hands-on science activities. Nick and Tesla's Secret Agent Gadget Battle is my favorite in the series, so far, because it has an interesting cast of potential spies that kept me guessing and some of the dialogue had me chuckling. I particularly loved the interaction between Nick and Tesla at the beginning of the book, when Nick is so nervous that he suspects absolutely everyone. A very entertaining installment in an adventurous series.

©2014 Nancy Horner. All rights reserved. If you are reading this post at a site other than Bookfoolery  or its RSS feed, you are reading a stolen feed. Email bookfoolery@gmail.com for written permission to reproduce text or photos.
Posted by Bookfool at 6:02 AM