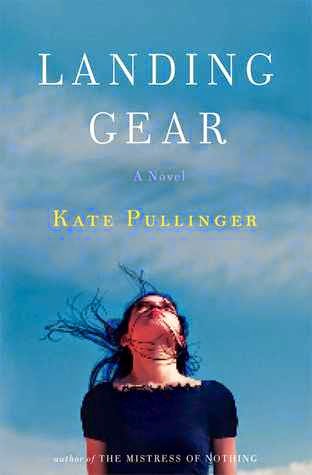 Michael nodded. "But what if the planes never flew again? What if crossing the Atlantic suddenly became much more difficult? What if choosing London really did mean choosing it, once and for all?"

Harriet was sure that she herself was alive. The kitchen floor was still dirty--what more proof did she need?

Harriet had spent a large part of the past two years online--doing what, she was never quite sure, given the way time contracted on the internet.  She monitored news stories and had become fascinated with the way that certain stories started as tiny specks but then became huge sandstorms, like the way a young man immolating himself in Tunisia became the Arab Spring.

Landing Gear is about a woman who wants more out of life, the husband she and her son seldom see because of his working hours, the teenage son who is ignored so thoroughly that he's falling deep into marijuana use and how their lives change when a Pakistani man, Yacub, falls from the landing gear of an airplane onto the hood of the mother Harriet's car.

There are several inciting incidents in Landing Gear and it bounces around in time a bit, so it can be confusing. But, one of those events is the eruption of Eyjafjallajökull, the Icelandic volcano that shut down air travel in Europe for 6 days in 2010. Another is Yakub's search for a job with decent pay. There is a young lady named Emily who is searching for her mother, Harriet's desperate ploy to improve her career, teenage Jack's search for friendship and meaning, Michael's confusion when he's stuck in New York and decides he will be more comfortable waiting out the travel delays in his native Canada.

All these threads eventually come together to lead to the creation of a wacky new family in which everyone is happier than they were before they went through the hardship that forced them together. This is actually one of my favorite types of books. I love stories in which a unique set of characters end up forming an unorthodox family unit. In this case, there is actually a core family to which other characters are eventually added, which is a little different than the typical "lonely people thrown into circumstances that unite them in a common bond" but it doesn't matter. What matters is that there is a set of characters who are all struggling and in some way their acquaintance makes life better for each of them.

The biggest problem I had with the book is the fact that the author begins the book by describing Yacub's fall from the sky and then backtracks to describe how the characters arrived at those various turning points that threw them together. It's massively confusing, at first. I kept flipping back and forth, trying to figure out when each of the events occurred. I loved the inciting events, though, because they were so unique. This is the first time I've read a book that described what it was like when the planes stopped flying in England and how it felt to be stranded due to a volcanic eruption. And, then there's the fact that much of the book takes place in London -- my favorite city and definitely one of my favorite book settings.

Highly recommended with a timeline confusion-factor warning - Quirky characters, unique events and a fun setting made this book a delight.  I was confused by the order of events in the same way the bouncing around in The Time Traveler's Wife baffled me. But, it's notable that you can be thrown for a loop by some aspect of a book like its timeline and still love a story. That's how I felt about The Time Traveler's Wife and it's also how I felt about Landing Gear. It was difficult figuring out the timeline but once I understood how everything fell together, I absolutely loved the story. I particularly recommend the book to readers who like a story about the creation of an unconventional family unit and to those who love a London setting.

©2014 Nancy Horner. All rights reserved. If you are reading this post at a site other than Bookfoolery  or its RSS feed, you are reading a stolen feed. Email bookfoolery@gmail.com for written permission to reproduce text or photos.
Posted by Bookfool at 6:04 AM