The Humans by Matt Haig 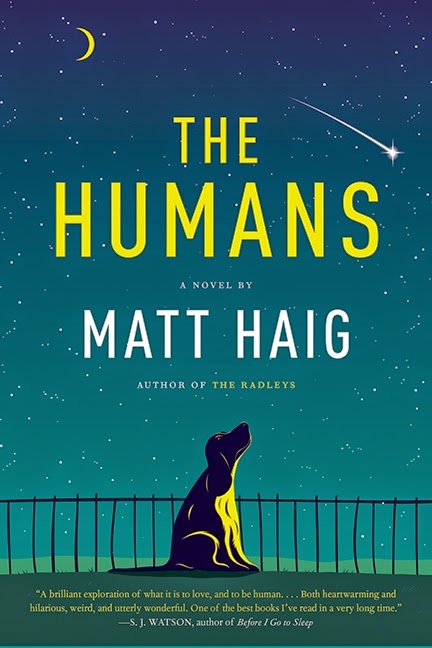 Life, especially human life, was an act of defiance.

On Earth, social networking generally involved sitting down at a non-sentient computer and typing words about needing a coffee and reading about other people needing a coffee, while forgetting to actually make a coffee.

Love is scary because it pulls you in with an intense force, a supermassive black hole which looks like nothing from the outside but from the inside challenges every reasonable thing you know. You lose yourself, like I lost myself, in the warmest of annihilations.

I'm going to write the description from the back of the book and then my own.

After an 'incident' one wet Friday night where he is found walking naked through the streets of Cambridge, Professor Andrew Martin is not feeling quite himself. Food sickens him. Clothes confuse him. Even his loving wife and teenage son are repulsive to him. He feels lost amongst a crazy alien species and hates everyone on the planet.  Everyone, that is, except Newton, and he's a dog.

Who is he really? And what could make someone change their mind about the human race . . . ?

Synopsis in my words:

Andrew Martin has just recently made a mathematical breakthrough that could change the world when suddenly someone else takes his place. Stuck in a body identical to that of the human he has replaced, an alien must find out who else knows about the professor's brilliant work and kill them all. Then, he can return to his home planet. But, after spending time on Earth, the alien comes to a few brilliant realizations of his own. Humans, in fact, are not all that bad, life is worth living, even if it doesn't last long, and love is a wonderful thing.

I ordered a copy of The Humans from The Book Depository because I wanted a copy with the British cover shown above.  I like it a lot better than the American cover because it's colorful and eye-catching. And, I also wanted to read the book, of course.  I was prompted to read it just a little bit sooner when Stephen Fry tweeted that the book is "fantasically funny and brilliant".  On the day Fry tweeted, I was packing for my trip to attend Simon Van Booy's fiction writing workshop in New York. The book was on my shelf already and I'd been eyeing it but I had not gotten around to reading it because of all the ARCs demanding my time. The tweet convinced me. I needed to read it now.

Thank you Stephen Fry and Matt Haig. As it turned out, The Humans was the perfect book for that particular set of flights. Because it has a little bit of an other-worldly aspect with an alien figuring out how to be human and I've been in a mood for other-worldly books (time travel, dystopian and sci-fi books are the ones that have been calling to me the loudest, lately), the storyline sucked me right in, thank goodness. I'd have hated to be without a really terrific read on a day when there were storms at both ends of a flight and I spent a solid 8 hours hanging out with other humans at a single gate (terrific humans, I must add -- the kind who were cheerful and chatty when sharing information about their delayed flight but who also didn't bother you when your nose was tucked into your reading material).

The most brilliant part of the book is near the end, when the alien who has become Andrew writes a list entitled "Advice for a human" for his earthly son. I would happily quote the entire list but instead I'll just tell you that you need to read The Humans because it's such a lovely, creative, uplifting story. The Humans is also light enough for vacation reading but deep as the ocean you'll be lying next to while you read . . . or the canyon. Whatever. It's a great read; that's all you need to know.

Highly recommended - A new favorite, a book to read and reread, about what it means to be human and how love makes life worth living.  Light reading, deeply meaningful. Don't let the word "alien" frighten you away  The Humans is not science fiction and not about aliens; the alien taking on human form is simply the author's way of looking at humanity and it works. It works beautifully.

It's notable that one of the characters is suicidal and Matt Haig is known for his advocacy for mental health, having been through a suicidal phase of his own. I love following him on Twitter (he tweets as @matthaig1) because his tweets are wise, witty, smart and deeply felt; and, I adore where he takes the part of The Humans that deals with suicide.

Today is Matt Haig's birthday. I recommend buying a copy of The Humans as a birthday gift to him.  He deserves the gift of a purchase and you, of course, deserve the entertaining and meaningful read.

©2014 Nancy Horner. All rights reserved. If you are reading this post at a site other than Bookfoolery  or its RSS feed, you are reading a stolen feed. Email bookfoolery@gmail.com for written permission to reproduce text or photos.
Posted by Bookfool at 1:44 PM