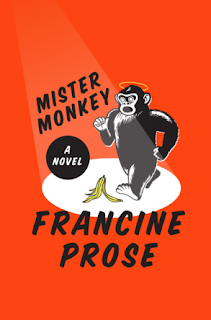 One of the first things that came to mind when I closed Mister Monkey was, "I need to read more by Francine Prose," not because I fell completely in love with the book (although it's sharply written and clearly the work of a pro), so much as the fact that reading Mister Monkey made me intensely curious about what else Prose may have written. I know I've seen the covers of some of her other books and found them intriguing but they looked so serious, by comparison. And, Mister Monkey is definitely light. One of the cover blurbs calls it "darkly humorous and brilliantly observant", an apt description.

The title of the book is also the title of the fictional children's musical around which the plot revolves. In Mister Monkey, the musical, a chimpanzee is being defended after he's accused of stealing. The lawyer, dressed in a rainbow-colored wig and a purple suit with a too-short skirt, is the first character whose story is examined. Margot, the actress who plays the chimp's lawyer, had a promising start but her career has stalled and she is beyond her prime. On the day in which the novel opens, things change. She receives an anonymous letter from an admirer and Adam, the boy who plays the chimp, does something so shocking that it changes the way the musical is presented.

Margot is just the first protagonist, though. As the book progresses, it segues from featuring one character to another, then another, then another. So, you see what happens between Adam and Margot from at least four different viewpoints. I wasn't sure exactly what the author was trying to accomplish when she began switching the POVs, but eventually I realized that the book was being laid out like a chain, with each new protagonist a link in the chain. In the end, Margot's story is nicely wrapped up. Unfortunately, I was expecting every temporary-protagonist to get a similar conclusion and it really didn't feel like I got that, although you could say that the end of the musical is an ending for everyone.

Recommended - While I wasn't entirely satisfied with the conclusion because I expected everything to be wrapped up with a nice bow, I'm pretty sure the author's intent was to circle back to Margot and conclude her story; and, in that she succeeded. Plus, the book is definitely entertaining and I want to read more by Prose, now that I've gotten a glimpse of her writing, so Mister Monkey is a thumbs-up.

Side note: I love that cover. When I received the book, my impression (based on the cover) was that it would be a light-hearted story. Also, I just like the way it looks, nice and bold. The cover of Mister Monkey definitely fits the tone of the book, so I think it's a success, all-around.

And, now a Fiona Friday on the Wrong Day photo, which is entirely due to the fact that I mistook Friday for Thursday. I figured it out when I woke up and realized my husband was either late for work or it was Saturday. 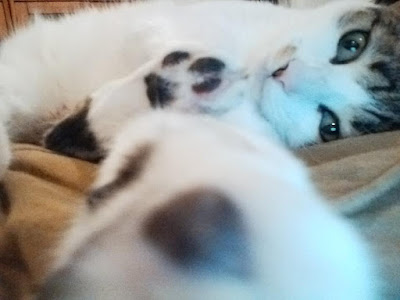 It looks like Izzy was taking a selfie and she might have if my finger hadn't already been on the shutter release.

©2017 Nancy Horner. All rights reserved. If you are reading this post at a site other than Bookfoolery  or its RSS feed, you are reading a stolen feed. Email bookfoolery@gmail.com for written permission to reproduce text or photos.
Posted by Bookfool at 7:22 PM