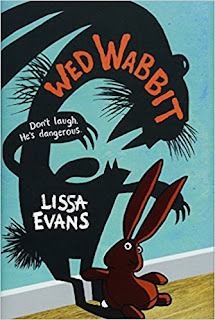 It's been a few weeks since I read Wed Wabbit and I remember it well but I'm going to default to the cover blurb before going on to elaborate in my own words:

Fidge is having a bad week. She's been flung into a bizarre world alongside three companions: two are deeply weird and the third is her awful cousin Graham.

She has to solve a series of nearly impossible clues, defeat a dictator who can't pronounce the letter 'r' and deal with three thousand Wimbley Woos (yes, you read that sentence correctly).

And the whole situation - the whole entire thing - is her fault.

So, let's unpack that a bit. Fidge is a British girl because Lissa Evans is British and I ordered this book from across the pond, since I was ordering another of Evans' books (a new book, Old Baggage) and it seemed like as good an excuse as any to throw one of her children's books into the cart. Fidge's little sister, Minnie, has a favorite book -- a book about the Wimbley Woos. They're tube-shaped creatures (maybe a bit like hotdogs with arms and legs) and each color of the Wimbley Woos has specific characteristics. Minnie also has a set of stuffed toys, one of which she calls "Wed Wabbit" because she can't say the letter 'r', or maybe just doesn't want to because everyone thinks her pronunciation is cute.

Something terrible happens to Minnie and when it does, Fidge is sent to stay with her cousin Graham. Graham has problems of his own. He's pretty much afraid of everything, so he's homeschooled and babied and really annoying. It's not entirely clear how this happens (and it really doesn't matter how) but there's a flash of lightning and Fidge and Graham are transported into Minnie's favorite book, along with a couple of toys. In Wimbley World, the Wimbley Woos are in loads of trouble since an evil creature crashed into the castle and ousted the king.

As you've already read in the cover blurb, Fidge has to unravel a series of clues to save the day and escape from Wimbley World. In the process, they have to work with the Wimbleys, who speak only in rhyme. Graham is the character who grows the most during the book, as he learns to face his fears. I think watching him change and realize that the world isn't really so scary at all is one of the most gratifying things about Wed Wabbit. But, I also love Fidge's clear love for her sister. Sure, she's an adorable nuisance and really irritating, but Fidge still adores Minnie.

Highly recommended - The main reason I'm besotted with Lissa Evans' storytelling is her sense of humor. Everything she writes is imbued with her sparkling wit and Wed Wabbit is no exception. The king, who was lazy about rhyming and not particularly interested in being a king, especially had me laughing out loud. Incidentally, I delayed reviewing Wed Wabbit until I'd checked to see if it's available in the US. Yep, it is. Lucky Americans. Wed Wabbit is such a delight that I found myself imagining young me in my beanbag chair, reading it over and over again. I would have devoured it as a kid and I hope someday I'll be able to share it with my grandchildren.