From the Corner of the Oval by Beck Dorey-Stein 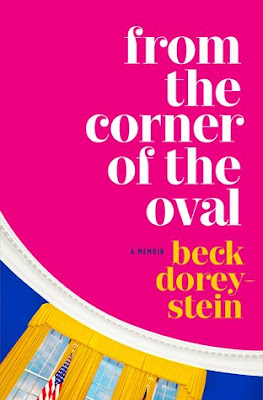 From the Corner of the Oval by Beck Dorey-Stein is the memoir of a woman who worked as a stenographer in the White House from 2012 to 2017. Originally a teacher, the author was balancing 5 jobs when she saw a job listing on Craigslist and applied. It was not clear that the job was in the White House until she went for the interview.

As a stenographer, Dorey-Stein's job was to make sure there was audio recording of almost everything Obama said, then transcribe what she'd recorded. She was one of five stenographers in the White House. Obama was big on transparency and accuracy. It was important to him that everything be recorded so that if he was misquoted he could simply refer to the transcript or recording of anything he said. Dorey-Stein also briefly worked in the Trump Administration, but only for a couple months. Trump's team had the opposite approach, everything public on video, little else recorded at all.

Beginning with her search for the job and the interview that she at first blew off because she was running late at one of the jobs she already held, Dorey-Stein describes her time working in the White House and her life both in and out of the job -- the long hours, hurry-up-and-wait activity, the travel on Air Force One and a second plane carrying reporters and staff, her rare interactions with the President. But, much of the focus is on her private life, her partying and love life, the friendships she developed at work, and how her writing developed as she took notes on everything that she experienced and shared some of her writing with the people around her.

Recommended but not a favorite - If you're looking for a solid memoir of life in the White House that focuses on Obama, his personality, and what it was like working for him, you might be a little disappointed. From the Corner of the Oval is fascinating but fluffy. There are glimpses of Obama but they're brief. Dorey-Stein's job was "in the bubble" (the people who circled around and traveled with the President) but not within the President's inner circle. What you get is an understanding of the hectic life people within the White House lead, how working there dominates your life, and how the people working for Obama felt about him (they admired and adored him; he was highly respected). Mostly, though, the book is about Beck.

There are some frustrations in reading her story. She spent a great deal of time partying with her co-workers, drinking heavily, gushing about her boyfriend, and sleeping with someone else. Her boyfriends are practically archetypes -- the boyfriend who's perfect except for the fact that he isn't present when she really needs him; the lothario who has a long-term girlfriend but flirts widely and sleeps around then typically ignores women after sleeping with them; the man found at an online dating site when desperation took over. I found myself frequently putting the book down, particularly during scenes in which Dorey-Stein was either drunk or sleeping with the lothario, yet again, and blaming it on her weakness. I was often frustrated with the author, her lack of control over her drinking, her inability to stop sleeping with a man who was clearly never going to choose her over the long-term girlfriend. But, I enjoyed reading about the hectic lifestyle, learning a little about the intensity of life in the White House and the President's schedule. From the Corner of the Oval is definitely fun for that peek into the White House. And now I want to read further, preferably a book or two by people who were in the inner circle during the Obama years.

Email ThisBlogThis!Share to TwitterShare to FacebookShare to Pinterest
Labels: Beck Dorey-Stein, memoirs, politics, recommended but not a favorite, Spiegel and Grau