Harbor Me by Jacqueline Woodson 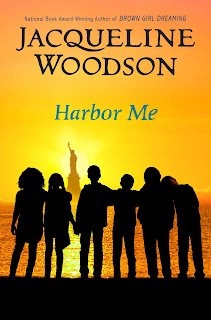 In Harbor Me by Jacqueline Woodson, a group of children are sent to talk amongst themselves -- nothing else, no teacher accompanying them, just the six of them chatting without any rules.

There were eight of us then. Our small class had come together because the school wanted to try something new: Could they put eight kids together in a room with one teacher and make something amazing? Eight special kids?

The children are understandably confused, at first, and the number of them drops almost immediately from eight to six. What's the point? Why are they here and what should they say to each other?

The walls are broken down a little by Esteban. We think they took my papi, he says. His father, an undocumented immigrant, has disappeared. Esteban is shocked, hurt, terrified. Where is his father? The other children, it turns out, have challenges of their own. But, it's Esteban's pain that helps them to open up.

The story is narrated by Haley. Her mother is dead, her father in prison. Haley lives with her uncle and keeps her story close to her chest. But, as Esteban, Holly, Amari, Ashton, and Tiago open up about their own struggles, Haley is encouraged to share. During the months that they meet in the classroom alone to talk, their stories unfold and the children learn that everything is easier when you can share it with friends.

Recommended but not a favorite - I have mixed feelings about Harbor Me. I love Jacqueline Woodson's writing. The characters are interesting people with diverse backgrounds and experiences, all living in Brooklyn. They're believable and well-rounded. I liked the theme that sharing with friends created a safe harbor of sorts, that in opening up they were able to think about what it means to harbor someone else in need. But, the children are younger than they sound and far more understanding of each other's difficulties than I can imagine in reality. To me, they sounded more like young adults. I had to keep reminding myself they were only -- I think this is correct -- 5th graders.

I also struggled with understanding the purpose of this experiment. Would a school really agree to leaving children alone in a room for no other reason than to talk to each other? I think I would have easily bought into the concept if there had been some sort of school requirement -- a report about what they learned, for example, or a book that they read together and discussed, rather than only talking. The problem was not the writing or even the story, simply the single element that stretched my ability to suspend disbelief. Fortunately, I do think middle grade readers will likely enjoy the book without worrying about that particular element and Harbor Me will be a particularly good addition to classrooms and school libraries. It's a book that could very well make children feel a little less alone in their uniqueness and encourage them to empathize with others.