Nightbooks by J. A. White 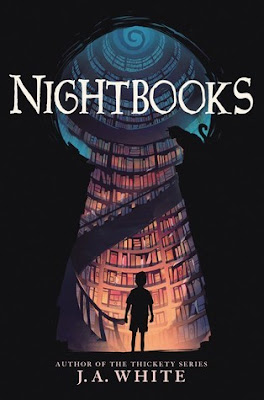 "Is it like you said yesterday?" Yasmin asked. "You afraid people will think you're weird?"

"Well, you don't have to worry about that happening with me," Yasmin said. "I already think you're weird. You can't make it any worse."

~from p. 80 of Nightbooks Advance Reader's Edition (some changes may have been made to the final print version)

Alex is in trouble. After sneaking out of his family's apartment in the middle of the night, he's been lured into the apartment of a witch named Natacha. Now, he's trapped in an enchanted apartment. One other child is stuck in the apartment. Yasmin has been trapped for a long time and she knows to work hard and keep her head down. Escape attempts are far too dangerous, and so is doing anything at all that makes Natacha angry. But, Alex can survive as long as he does what Natacha asks of him. He must read a scary story to her, every night. Alex has a ready supply of stories in what he calls his "Nightbooks". But, fear and the determination to escape are keeping him from writing more. When disaster strikes and most of his stories are destroyed, Alex knows time is running out. Can Alex and Yasmin find a way to escape? Or will escape lead to an even worse fate?

What a fun, creepy read. Nightbooks is for middle grade readers (Grades 3-7, ages 8-12, according to the publicity info on the back of the ARC) but this older adult found the book both creepy and delightful. I enjoyed the stories within the story -- the tales that Alex told Natacha to keep her and the magical apartment happy -- and the surprises that gradually unfolded as Alex finally learned why Yasmin avoided talking to him, the meaning behind certain objects, and the connection of Natacha to an age-old fairy tale.

Highly recommended - Children and adults alike will enjoy reading about Alex, who is charmingly weird, the incredible library in which he's tasked with writing stories, the stories within the story, and the tale of Alex and Yasmin's daring escape attempt. A great book for spooky fall reading.


©2018 Nancy Horner. All rights reserved. If you are reading this post at a site other than Bookfoolery or its RSS feed, you are reading a stolen feed. Email bookfoolery@gmail.com for written permission to reproduce text or photos.
Posted by Bookfool at 1:05 PM