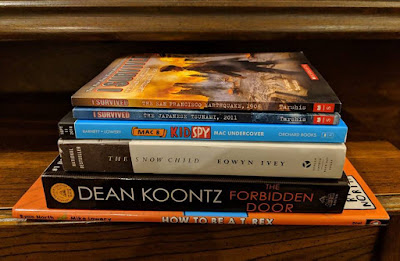 
I broke my no-purchase rule twice - on a whim, as usual. A friend mentioned how much her granddaughter enjoys the "Who Was?" series (from which I recently read two books) and that she also likes the "I Survived" book series. Being a childhood fan of Reader's Digest's "Drama in Real Life" articles, I thought maybe the "I Survived" books would be similar first-person accounts -- written using quotes from primary sources, perhaps? Bad assumption. They're fiction. But, I read one and it was a good story, even if it was not told by an actual witness to the event (the San Francisco earthquake). The Snow Child has been on my wish list for ages and I ordered a used copy when I read a list of books to read in the summer if you want to cool off. I often will read wintry books when it's hot outside, so that was my thought process. But, I have a huge list of books to get to in August so it remains to be seen if I'll be able to squeeze it in. Mac B. Kid Spy and The Forbidden Door were acquired via Shelf Awareness. I haven't read a Dean Koontz book in ages. Fingers crossed it's a good one.


Definitely an interesting reading week. Of this week's completed books, Unpunished Murder is the one I feel is the most important so I hope to get around to reviewing it before Friday. How to Be a T. Rex and I Survived the San Francisco Earthquake, 1906 are both children's books. I'll save the "I Survived" book for a Children's Day; T. Rex is a tour book. The Muse is my F2F group's discussion book for August and I'm praying I'll make it to the discussion because I really want to hear what everyone else thought of it.


I got really caught up in The Muse and didn't touch From the Corner of the Oval till I'd finished, but I'm now about 1/3 of the way into Dorey-Stein's memoir of her time working as a stenographer in the Obama White House. It's a nice, light read - a bit on the fluffy side. I've only read the intro to Death of the Snake Catcher but that alone is worth the price of the book because it's such a fascinating tale about the author from Turkmenistan, his decision to emigrate after being declared an "enemy of the state", and how his experience has informed his storytelling. And, I'm not far into Sons and Soldiers, either, but I was a bit blown away by the similarity of the description of life in a German concentration camp (I've read about how prisoners of the Nazis were housed for decades but was still taken aback at similarities) and the descriptions of the cages for immigrant children being held in America. Maybe I just didn't want to think of them as similar in any way?


All three of those books were excellent but in very different ways. I've read so many terrific books, lately.

It was a movie-watching kind of week.

It's been so long since we've seen Four Weddings and a Funeral that all I really remembered was the poem by W. H. Auden and a few other minor details. I'd forgotten what a fun movie it is. We watched it during a break from emptying some ugly bookshelves that used to be in our youngest son's apartment and shifting most of the books to a set of shelves that weren't being used as effectively as they should have. Into the trash go the rickety book cubes. Four Weddings and a Funeral gave us a nice laugh break, although I will never be able to watch John Hannah reading "Funeral Blues" without snuffling. Four Weddings made me want to revisit a bunch of other movies: Notting Hill (Hugh Grant), Sliding Doors (John Hannah), Framed (Kristin Scott Thomas). I couldn't find any of them, so the next movie we watched was a totally random choice. 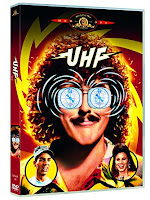 UHF has the rare distinction of having been filmed in Tulsa, and it's nuts (which we like) so we watch it on occasion to enjoy the crazy. Another fun choice and one we hadn't seen in quite a while.

Husband wasn't around when I watched the last movie, The Final Countdown. It's an old family favorite that we watch fairly regularly and I just happened to find it when I was flipping through movies labeled "SciFi". I noticed a few idiosyncracies that I've never noticed, before, this time. Like, when they sound general quarters, everyone gets dressed up for war but the captain calls a meeting and nobody is wearing their guns or helmets, after a scene in which everyone dresses for battle. I need to go back and watch the "general quarters" and "urgent meeting" scenes to see if I'm wrong and the most senior people did not, in fact, strap on guns like the rest of the crew. At any rate, things do start to jump out at you after you've seen a movie a couple dozen times.


A fun reading and TV-watching week, in general. And, wow, did we get a lot of work done between movie breaks. Our guest room is looking much better.

©2018 Nancy Horner. All rights reserved. If you are reading this post at a site other than Bookfoolery or its RSS feed, you are reading a stolen feed. Email bookfoolery@gmail.com for written permission to reproduce text or photos.
Posted by Bookfool at 2:30 PM