Under a Dark Sky by Lori Rader-Day 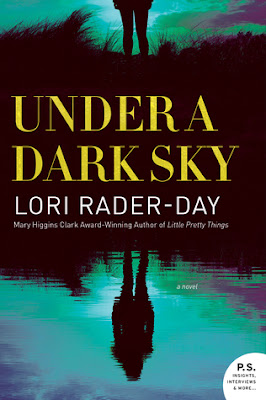 Before his death, Eden Wallace's husband made a reservation at a dark sky park, a place that's kept deliberately low-light so that visitors can enjoy the night sky. Eden has been both an insomniac and afraid of the dark for a while, jobless and unable to talk herself into actually taking a photograph with the camera she carries everywhere. She thinks that perhaps being forced into the darkness for a few nights will help her face her fears. But, there's only one problem.

The cabin in which Eden plans to stay is a large one with room for a number of guests. She is far from the only person planning to stay. A group of twenty-somethings has also arrived, and they're college friends. Eden's room is at the back of the cabin and separate, so she decides to stay for a night and go home. She awkwardly hangs out with the group of friends and then finds herself surprised to actually fall asleep.

Of all the nights to succeed at battling her insomnia, this was definitely not the right one. In the middle of the night, one of the other guests is murdered. Eden wakes briefly and hears some odd noises, sees someone running away after a door slams. But, then she falls back asleep and is surprised to find out there was a murder in the night. Worse, she is a suspect.

Eden knows the best way to get herself off the hook is to understand the strange friendship between the other guests and figure out who committed the crime. But, she also has to deal with her own problems and fears. When she finds out she may be sleepwalking during the rare moments she drifts off to sleep, she even must question herself. Is it possible Eden murdered a perfect stranger? If not, can she move on from the pain of her marriage and loss?

I didn't realize it would be so difficult to write briefly about Under a Dark Sky. It's a little more complex than I thought, as I was reading it. I'm not quite sure what it was about the book that sucked me in (whether it was the story or the author's voice) but Under a Dark Sky really grabbed me hard. It's a fairly slow-paced read, and yet I found it utterly captivating. I liked the slow reveal of the personalities, the tensions between the people in the group, the interaction between them and the local police, what we found out about Eden, the way mishaps continue to plague the group and each one reveals something about the people involved. And, I loved the ending.

Highly recommended - Apart from one particular element that I thought was so obvious I wanted to yell at Eden to remember what so-and-so said and she'd know the answer, I found the mystery in Under a Dark Sky just out of reach enough to suit me and the complexity of the characters satisfying. I gave the book 4 stars because that one element annoyed me a bit, but I highly recommend it because I truly, thoroughly enjoyed the reading and had trouble putting the book down. Be aware, though, that it's not a fast-paced, edge-of-your-seat read but more of a slow burn.

©2018 Nancy Horner. All rights reserved. If you are reading this post at a site other than Bookfoolery or its RSS feed, you are reading a stolen feed. Email bookfoolery@gmail.com for written permission to reproduce text or photos.
Posted by Bookfool at 11:32 AM