Six Weeks in the Sioux Tepees: A Narrative of Indian Captivity by Sarah F. Wakefield 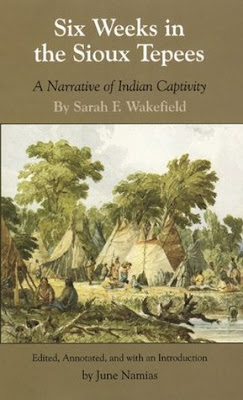 Six Weeks in the Sioux Tepees by Sarah F. Wakefield is the memoir of a woman who was held captive during the Dakota War of 1862, a war between Native Americans and the whites occupying their former lands. Author Sarah Wakefield describes how she was captured and imprisoned after describing the lead-up to the war. She talks about why she chose to wear native clothing during her captivity and behaved the way she did (acting as if the natives were her friends, working with them, speaking only positively about them), and defending the native man who kept her safe.

Wakefield wrote her narrative primarily to explain herself because she was criticized and ostracized for defending Chaska, the man who protected her and was arrested because he stayed behind when she and her children returned at the end of the war (he stayed with them to make sure they were safely delivered home). If only for the fact that Sarah Wakefield was rare in defending her captors, the narrative is interesting. She had a unique perspective, having lived near the natives for a time and already knowing their language. She was also well aware of what the natives had given up -- land and their ability to subsist on it -- and the fact that the government was very late delivering the promised food and money they were to receive in return for their land. She knew they were starving and angry; the uprising was not entirely unexpected.

Recommended - While the writing is a bit awkward, the book contains a lengthy introduction that's nicely explanatory and copious notes that also help clarify much of what the author talks about. I saved the introduction for last and I'm glad I read it that way because I preferred to read the author's explanation of events first, more detailed description later, although there's really only one possible spoiler if you don't want to know how things ended up in advance of reading the author's description. It's a sad story. I'd never read anything at all about the Dakota War, nor had I even heard of it, but I found it admirable that the author was willing to defend her captors in the face of the "Let's kill all the natives" frenzy that happened after the war ended.


©2018 Nancy Horner. All rights reserved. If you are reading this post at a site other than Bookfoolery or its RSS feed, you are reading a stolen feed. Email bookfoolery@gmail.com for written permission to reproduce text or photos.
Posted by Bookfool at 11:42 AM