The Secrets Between Us by Thrity Umrigar 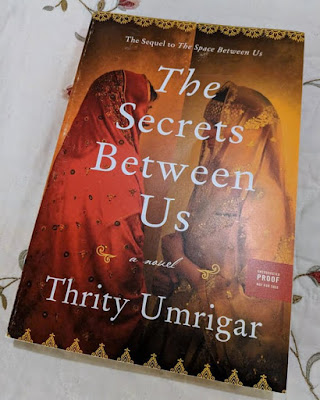 The Secrets Between Us by Thrity Umrigar is a sequel, so first things first . . . here's my review of the first book:

The Space Between Us by Thrity Umrigar

If you haven't read The Space Between Us, the ending might be a bit of a spoiler but it's necessary to mention the general concept before moving on. So, fair warning . . . I'm going to skip a line before talking about The Secrets Between Us to avoid spoiling it for anyone.

Bhima has always been treated kindly by her long-term employer but at the same time she's been treated as if she's dirty, never allowed to sit on the furniture and made to squat on the floor while she had her tea. She cared for her employer's family as if they were her own. But, then she made a shocking discovery and she no longer works for Sera Dubash.

Now, she must find a way to support herself and her granddaughter, Maya. To do so, she finds not one but two new jobs, cleaning for a crazy woman she calls "Mrs. Motorcyclewalla" and a young woman. As with her old job, there are challenges. Mrs. Motorcyclewalla increasingly makes irrational demands of Bhima and seems to be growing more delusional each day. And, when her younger employer, Sunita, moves in a surprisingly open and untraditional roommate who has lived outside of India, Bhima is horrified by her unconventional nature.

When a neighbor in the slum is unexpectedly widowed, Bhima takes on a third job. Her neighbor's deceased husband had purchased some fruit. It can't be returned for cash; it must be sold to be of any value. So, Bhima agrees to find a way to help her sell the fruit. But, to do so, Bhima must find space at the market and a way to balance her other jobs -- and that means humbling herself to pay a bitter old woman to share her space. But, there's more to that older woman than meets the eye. As Bhima gets to know Parvati and work with both her and the man who used to carry her basket when she went to the market for her former employer, they slowly find that each has secrets from her past and pain that can never be fully vanquished. But, they also begin to forge a surprising friendship.


©2018 Nancy Horner. All rights reserved. If you are reading this post at a site other than Bookfoolery or its RSS feed, you are reading a stolen feed. Email bookfoolery@gmail.com for written permission to reproduce text or photos.
Posted by Bookfool at 9:28 AM