How to Be a T. Rex by Ryan North and Mike Lowery 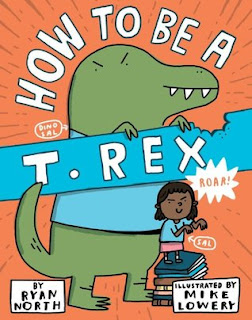 One day in class my teacher asked us "What do you want to be when you grow up?" And I said, "A Tyrannosaurus Rex," because obviously.

Sal wants to be a Tyrannosaurus Rex. They roar all the time and have awesome teeth and giant bodies. Sal is tiny, never roars, and her teeth are not pointy enough. The choice, she says, is clear. But, her brother says it's impossible for her to be a T. Rex.

That night, she concentrates and becomes a T. Rex (in her imagination). A T. Rex can eat anything and chase people away with a roar. You just have to be fierce, unafraid, and not care what anyone thinks if you want to be a T. Rex.

When Sal pretends to be a T. Rex, she's actually pretty rude -- hogging the pizza, stealing the soccer ball, not being nice to people, roaring all the time. People like rules and there are other downsides to being a dinosaur. So, instead, Sal decides to be a dino/human hybrid.

And, she lets her friends join in. They forgive her for being a jerk when she was pretending to be 100% T. Rex.

Highly recommended - What I love most about How to Be a T. Rex is that it's one of those books that is super fun to read aloud. You can be extremely dramatic with the roars and the claws, but then play the part of Sal's brother, rolling his eyes. It's a hoot. Toward the beginning of the book, you start to wonder if you're encouraging bad behavior by reading about a kid who is acting terribly while she pretends to be a T. Rex. But, then Sal figures out she's making everyone upset and alters her behavior.  So, the story is a good one, too. I'm not a huge fan of the simplistic artwork, but I think it fits the storyline perfectly -- dramatic, expressive, bright, clear. I gave How to Be a T. Rex 5 stars. I can easily visualize myself reading it to a classroom full of wiggly kids or a grandchild and having a blast.