The Muse by Jessie Burton and a Fiona Friday pic 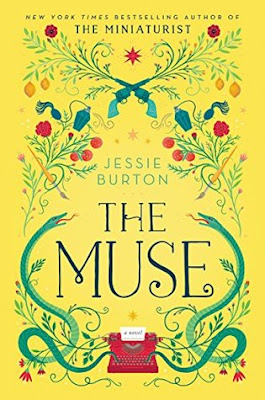 The Muse is my first read by Jessie Burton but I am definitely going to seek out The Miniaturist, now that I've read her second book.  The Muse was the August selection for my F2F book group. It has two intertwining stories, one set in Spain just before and at the beginning of the Spanish Civil War in 1936, the other storyline in the 1960s in London.

In 1967, Odelle Bastien begins working at the Skelton Gallery in London. Since she moved from Trinidad, five years prior, she has been working in a shoe store and writing poetry in her private time. Now, her roommate and best friend from Trinidad is getting married and Odelle is beginning a new phase of her life. At Cynth's wedding, Odelle meets a man who has inherited a painting from his mother. He's clearly interested in Odelle but she's uncertain about him and tired from the wedding festivities. She tells him to bring his painting to the gallery where he may possibly be able to get it appraised.

When Odelle's new friend finds out that his painting may be a missing work of art by an artist who disappeared during the Spanish Civil War, Odelle is intrigued. Thanks to meeting him again through her work, she begins a relationship with the young man. Meanwhile, her boss, Marjorie Quick, encourages Odelle to work on her poetry and tread carefully around the young man with the painting. He is, she suspects, not being entirely forthcoming about the painting's provenance. Odelle takes Quick's words to heart and quietly looks for answers on her own.

In 1936, the Schloss family moves into a finca (a mansion) in rural Spain. A brother and sister come to greet them and Teresa offers her services around the house while brother Isaac Robles talks of political unrest and mentions that he is a painter. Olive Schloss is also a painter and she is instantly besotted with the handsome Isaac. But, so is her mother, Sarah. While Sarah hires Isaac to paint a portrait, Olive finds that Isaac's presence and the encouragement of Teresa are leading to the best painting she has ever done.

Things are becoming more dangerous as war looms. When Teresa plays a trick on Olive to get her paintings some attention, both Olive and Teresa are surprised at the results. Still inspired by her muse, Olive continues to paint. But, the deception of Olive's father is infuriating Isaac. What will happen to the Schloss family when war breaks out and they choose not to return to England? What will become of Olive's art?

That was a long-winded description but The Muse is a fairly complex story. Odelle's story contains a number of mysteries. Is her boyfriend withholding information about the painting? Where did it come from (this one becomes obvious pretty quickly) and how did his mother come to own the painting? What's up with Marjorie Quick and does she know more about the painting than she's letting on? Meanwhile, the answers posed in 1967 are slowly coming to light through the unfolding story in Spain as the country's political situation grows more dangerous. What will become of Isaac Robles, the lost painter?

Highly recommended - While I was disappointed with the ending of The Muse, I enjoyed it enough to recommend it highly. I was utterly mesmerized, particularly by the story that took place in Spain and explained the origin of the painting. At one point, I was so immersed in the story that when I glanced up from the book I was surprised and disappointed to find that I was not, in fact, in a Spanish mansion. That made me laugh. It's not often I get so swept away that I feel that you were there sensation. As to the ending, I thought the author told us a bit too much. I don't know that I've ever felt that way before, but there were a couple things I would rather not have known about what happened after the Schloss family left Spain. I just felt like they were unnecessary and I'd rather have formulated my own mental ending. Weird, but true.

Discussion-wise: The Muse was a marvelous discussion book. There were lots of fine details to pick apart and discuss, secrets to unravel. Odelle is black and has a strange accent but Trinidad is part of the Commonwealth, something she's constantly having to explain. Her boyfriend, the man with the painting, is white. In the 1960s, this produces some complications. The other characters also have interesting lives, secrets, complexities.

Everyone in my group enjoyed the book and some of us were quite passionate about how we felt about particular details. One of the things I was reminded of while reading The Muse was just how little I know about the Spanish Civil War. I have a friend, from my hometown, who was born in Spain and whose mother was imprisoned in a concentration camp by Franco. So, I asked him if he could recommend any particularly good books about the Spanish Civil War to help me fill my lack of understanding. He recommended two titles and I ordered a copy of each, so I'm looking forward to eventually reading them. I've temporarily set aside my book on Israel and Palestine and want to finish that, first, but there is no end to the number of things I need to learn about and I'm excited to have another piece of history to study up on, in the near future.

Fiona Friday time! I opted to plunk this week's pic below a review because I've reviewed so little of what I've read in August. Whatever works, right? Fi is all elbows in this shot of her in a playful mood. Outside of the frame was a basket with coupons peeking out of the top and she was attacking the coupons when I caught her attention. Love that crazed look cats get when they're energetic. 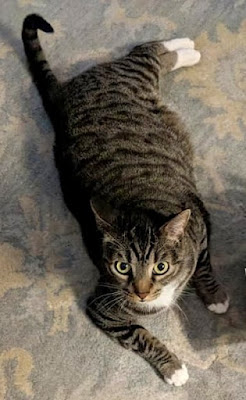 ©2018 Nancy Horner. All rights reserved. If you are reading this post at a site other than Bookfoolery or its RSS feed, you are reading a stolen feed. Email bookfoolery@gmail.com for written permission to reproduce text or photos.
Posted by Bookfool at 7:03 AM