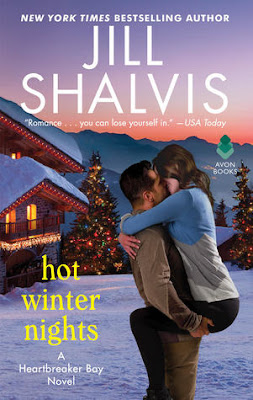 In Hot Winter Nights by Jill Shalvis, Molly and Lucas work together at a security firm. When he wakes up in bed with Molly, Lucas is a little freaked out. He remembers feeling compelled to take a single drink, the night before, and then . . . nothing. What happened with Molly, last night? Molly is behaving more than a little bit shifty. Lucas has recently been shot, hence the blackout. Even a single drink with his painkillers was too much. But, Molly is not saying what happened.

Bored with being off work, Lucas insists on returning without clearance from his doctor. Molly is the office manager but she wants to get involved in the investigation side of the firm. To that end, she's brought up a case to her boss. Some elderly women who work as elves at a local Christmas Village are concerned that Santa is not sharing the profits as he usually does. They think he's being greedy and keeping their bonus money.

Molly's boss, Archer, says they're overbooked and that's not their kind of case, anyway. But, Molly is determined. To keep her safe, Archer asks Lucas to keep an eye on her. He'll have to pretend to work with her. But, before he gets around to offering to help, Molly asks for his assistance.

Now that Lucas thinks he's slept with Molly, he realizes just how much he's attracted to her. Molly feels the same but she has secrets and works hard to keep them close. But, now that the wall between them has been broken down, will they be able to stay away from each other? What will happen when Molly goes undercover as an elf and discovers that Santa's story is a lot more dangerous than she could have imagined?

Hot Winter Nights is a romance, so you know the answer to that first question about whether or not they'll be able to keep their hands off each other is a flat "No." But, neither one of them is the type to commit. Molly has been hurt in the past and Lucas has suffered two shocking losses that have convinced him he must never give his heart away, again.

Recommended to a specific audience - Hot Winter Nights contains a favorite blend for romance readers: an alpha male and a plucky female who is every bit as capable as the guys. I liked the story and I sighed at the ending. Romance readers will love it. I was a little disappointed that it was light on action. I'm not a typical romance reader, so the bedroom scenes honestly just bore me, and there are a lot of them. Fortunately, there are some terrific scenes toward the end -- an exciting concluding scene with plenty of danger, followed by a heartwarming ending. So I closed the book happy. It might not be a favorite because I like more action and less romance but Hot Winter Nights left me satisfied, in the end.


©2018 Nancy Horner. All rights reserved. If you are reading this post at a site other than Bookfoolery or its RSS feed, you are reading a stolen feed. Email bookfoolery@gmail.com for written permission to reproduce text or photos.
Posted by Bookfool at 12:15 PM

Email ThisBlogThis!Share to TwitterShare to FacebookShare to Pinterest
Labels: Avon Books (an imprint of HarperCollins), Jill Shalvis, one in a series, recommended to a specific audience, romance, romantic suspense