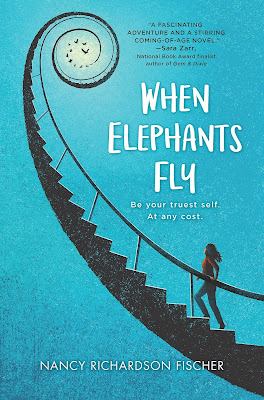 In When Elephants Fly by Nancy Richardson Fischer, Lily Decker has a long-range plan. She's 18 and has entered the age during which people are most likely to be diagnosed with schizophrenia, a disease that has attacked the women in her family for at least 3 generations. Her mother had paranoid schizophrenia and tried to throw Lily off a roof to make her fly. Lily is still haunted by her mother's actions and the way her father watches over her doesn't help. For the next 12 years, Lily plans to keep her life calm, avoid drugs and alcohol, and have her best friend, Sawyer, regularly quiz her to see if she's showing signs of schizophrenia.

There's only one problem: life is becoming stressful. After getting an unpaid internship at the local newspaper and coming up with a "name the baby elephant" fundraiser for the zoo, Lily goes to interview the zookeeper. The baby elephant, Swift Jones, is attacked by her mother while Lily's there. Remembering her own mother's attack, Lily steps between the calf and her mother. She's fortunate not to get killed, but the incident and the article that ends up being published will complicate her life.

*****WARNING: POTENTIAL SPOILERS AHEAD. SKIP DOWN TO WHERE I'VE DECLARED IT SAFE IF YOU DON'T WANT TO HEAR TOO MUCH ABOUT THE PLOT*****

Now not only the calf's life is in danger but her future, as well. Swifty, as Lily begins to call her, is the offspring of a zoo mother and a father who belongs to a privately-owned circus. Lily tries to keep her article about the interview generic to avoid bringing the danger to the attention of the public. But, when her article is substituted for another that tells the unvarnished truth about Swifty being attacked by her mother, the circus insists that Swifty must be flown from the zoo in Oregon to their home in Florida, where she will learn to perform.

Lily ends up going along and finds that the conditions are not good. Baby elephants are sensitive and it's hard enough to get Swifty to eat, now that she's been rejected by her mother. But, things get even worse in Florida. Will Lily be able to come up with a plan to save the elephant calf before it's too late? When the stress and fatigue begin to get to Lily and she starts to hear voices, is it just her imagination or is she beginning to have symptoms of schizophrenia? Is there anything she can do to stop it?

OK, hmm. I have a lot of thoughts about this book. First of all, I found it utterly compelling because of the idea of what it must be like to live with the fear that you might be hit by a hereditary mental illness. It has a bit of a horror story feel in the vein of Richard Matheson's short stories, where something begins to happen and the horror is in not being able to do anything at all about it. Lily has researched medications and seen the difference between her mother on meds and off -- she knows that medication carries its own risks. And, then there's the elephant's story. The two stories deliberately play off each other: elephant and teenager rejected by their mothers and attacked. But, the themes are kind of different. For Lily, the theme has to do with the importance of living her life, even with a threat hanging over her head. For Swifty, it's more a subject of endangered animals and how quickly elephants are being driven to extinction.

I had a few minor problems with the story but I found it engaging and thought-provoking enough to keep me reading.

Recommended - When Elephants Fly is moving and heartbreaking, thought-provoking, and meaningful. I really enjoyed the story and I particulary think it would make a great discussion book.  My biggest problem with it was a sagging middle, although there were some other elements that bothered me. Of those, the one that nagged at me the most was the idea that a person who didn't work for the zoo would even be allowed anywhere near the elephants, much less be able to get herself into a situation in which she could have been killed or (later) allowed to travel with the zoo staff. I also wondered about the mental illness aspect. Is it likely that a person would suddenly begin to have symptoms of schizophrenia after having a totally normal first 18 years of life or would she have potentially shown some signs earlier? That seemed somehow "off" to me and a psychologist who wrote a review at Goodreads had some interesting but harsh words to say about the book because she didn't think the psychological elements were quite right.

Having said all that, I also realize it's fiction and it's YA. Although accuracy is certainly preferable, the story might not work as well if the author hadn't taken a little creative license. Part of what keeps the story moving forward is that question about schizophrenia and the main character: "Will Lily be okay?" I think it would make an excellent choice for a mother-daughter or young adult book club. When Elephants Fly opens up an opportunity for discussion about both mental illness and the preservation of wildlife on our planet, both excellent topics.