Never Too Young by Aileen Weintraub, illus. by Laura Horton 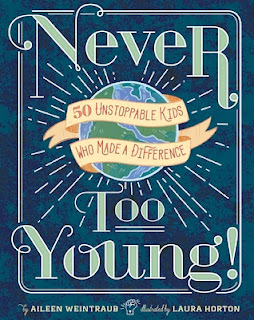 Never Too Young: 50 Unstoppable Kids Who Made a Difference by Aileen Weintraub is a book of mini-bios of kids who either showed brilliance at a skill or went above and beyond to make life better for people while still young. Some of them still are not all that old, some are stories of historical characters who have come and gone.

I've reviewed some similar books of mini bios about adults but I believe this is the first one I've read that's specifically about how natural talent, hard work, and skill manifested early. There's quite a variety and both familiar names and more obscure youngsters are covered. Amongst those who are familiar, a few are:


Although they're familiar to the adults in the room, some of those names may not be known to youngsters and I didn't know a few of them were child prodigies. I merely knew them as successful adults.

I love the fact that author Aileen Weintraub didn't stick to just those who are well-known, though. Some of those I'd never heard of:


Highly recommended - Great for school libraries and any youngster who likes to read inspiring stories about children who have done big things, Never Too Young would also make a great reference for classrooms to use as a starting point for class projects or reports.


©2018 Nancy Horner. All rights reserved. If you are reading this post at a site other than Bookfoolery or its RSS feed, you are reading a stolen feed. Email bookfoolery@gmail.com for written permission to reproduce text or photos.
Posted by Bookfool at 10:44 AM