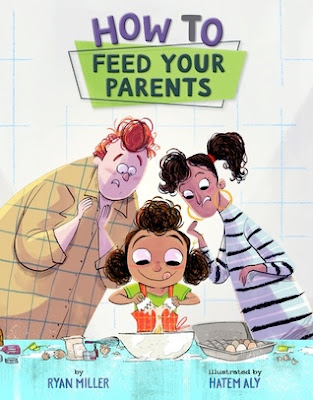 The list of things Mr. and Mrs. Macaroni would eat was very short [. . . ]
They refused to even try anything else.

Matilda Macaroni, the child in How to Feed Your Parents, likes a variety of foods and she wants to try quiche, but her parents are not interested. In fact, they're extremely picky. They only eat chicken nuggets, elbow macaroni mixed with orange powder, burgers from kids' meals, grilled cheese sandwiches, pepperoni pizza, and sugary cereal that turns the milk a different color. You can see where this is going. Author Ryan Miller has turned the concept of the picky eater on its head. Instead of the child being a picky eater, it's the parents who eat a limited range of foods and refuse to try anything new.

Matilda discovered her love of other foods when Grandma Macaroni brought over a pot of jambalaya.


"Yuck!" Matilda's dad said when he saw the pot.
"No way!" Matilda's mom said when she smelled the steam.
They pushed their plates to the center of the table and sulked.

Matilda began to try more new foods: gumbo, goulash, sushi, pork paprikash. She had to learn to cook for herself, since her parents kept their menu strictly limited. She learned to crack eggs, first. Then, she learned oven and knife safety and read cookbooks at bedtime. She bought ingredients at the farmer's market. But, how would she convince her parents to try the new things she'd learned to cook?

Matilda convinces her parents to let them cook burgers. Then, she tells them they can eat what she's cooked or go hungry. Her parents are grossed out by the mushrooms and green stuff, but they're also impressed that Matilda cooked, so they agree to try their burgers and decide they're not so bad. Maybe Matilda can cook quiche, next? Instead, her parents ask if they can help with the cooking.

Highly recommended - I love a story in which a concept is reversed and How to Feed Your Parents is perfect -- a child convincing her picky parents to eat new things. I'm certain it will get a few giggles, at first, and then become a favorite of many children. Mine would have loved it at picture book age and I think it's a hoot. The illustrations are great; the artist did a tremendous job of showing the horror on the faces of Matilda's parents when there's something they don't want to try and the excitement when they realized food is not such a horrible thing, after all. A delightful read and a new favorite.

This is my final entry for Children's Week. I've decided to save the books for older children and start working on reviewing those, mixed in with books for adults, next week.


©2018 Nancy Horner. All rights reserved. If you are reading this post at a site other than Bookfoolery or its RSS feed, you are reading a stolen feed. Email bookfoolery@gmail.com for written permission to reproduce text or photos.
Posted by Bookfool at 6:51 PM