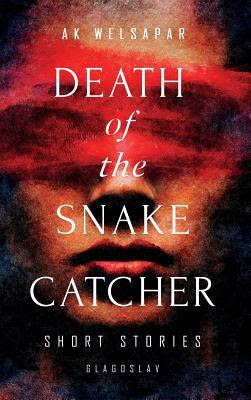 Death of the Snake Catcher by Ak Welsapar is a collection of short stories with several different translators. Author Ak Welsapar is originally from Turkmenistan, a country I knew nothing about until I read the introduction of Death of the Snake Catcher and followed that up with a little online reading. It is one of the "most restricted places on the planet", with media that's entirely government controlled and "absymal" human rights (I'm quoting the intro).

You get a sense of what it's like to live in such a closed, somewhat terrifying regime from some of the stories, although they're not all set in Turkmenistan. The author, after being declared an "enemy of the people", eventually had no choice but to escape and has lived in Sweden for decades. Some stories felt to me like they could happen on my home turf, with perhaps a few minor alterations, and some were a little too foreign for me. At least one made very little sense to me because the traditions and expressions were a little too far from my own understanding. But, the book was worth reading for the few that really made an impact and the introduction left an indelible impression on me, as did my favorite story.

A few of the stories:

"On the Emerald Shore" - A mist envelops the sea and the locals believe it to be the work of the drowned. Several people have recently drowned in the area. One is missing and presumed dead, another has washed ashore. In the nearby bar, people play billiards and discuss the drownings, wondering about how they may have occurred, especially to the most recent victim, who was muscular and fit.

"Love in Lilac" - My personal favorite, the story of a young man named Arslan who spots a "beautiful, fair-skinned girl" sitting amongst the lilacs in a Moscow park. He approaches her awkwardly and eventually they fall in love. But, it's forbidden to interact with foreigners and she's a student from Sweden. After falling for her hard, he is one day removed from class.

He was picked up by the KGB with a sickening lack of ceremony.

What follows is one of the most intense sections of a short story that I recall reading since the days when I used to read a lot of Richard Matheson's short stories. I don't want to give it away, but it is an understated sort of menacing experience in which the tension ramps up because of what doesn't happen but could -- and Arslan knows it. I've recently seen comments that some Americans are unconcerned about the possibility that we could become an authoritarian regime. This story should make anyone who made such casual remarks have second thoughts.

"One of the Seven is a Scoundrel" - Another menacing story (the tense stories were my absolute favorites). Seven men are returning home in a horse cart from a hard day's work harvesting and talking about how some nearby villagers have been sent to Siberia when their path intersects with that of some soldiers. The soldiers have a quota of men to take to prison but one has escaped, so they need one more. Who will end up being taken away, not for doing anything wrong but to fill a quota? Who will be the scoundrel who turns him in?

Recommended - The title story, "Death of the Snakecatcher" is another favorite. I recommend Death of the Snakecatcher particularly to short story lovers and people who enjoy reading translations. While there were times I felt like I needed some sort of explanation -- a glossary, an introduction to a particular story, etc., to make sense of specific traditions -- the stories that I liked best were so thought-provoking that I had to put the book down to let a story roll around in my head for a day or two. That has always been the sign of a phenomenal short story to me, not being able to get it out of my head until I've given it some thought or wanting to talk to everyone about it.

Two vocabulary words I learned from this book:

Albescent - (adj.) white or tending toward white. From this passage:

On the third day, a mist enveloped the sea. Albescent, rising up off the water, it languidly wrapped around the shore, then the town, little by little covering the entire surroundings.


~from "The Emerald Shore"


Takyr - (n.) meaning "smooth, even, or bare", is a type of relief occurring in the deserts of Central Asia, similar to a salt flat in the southwestern United States. From this passage:

The sweltering summer heat seemed intolerable to the men lying on the horse cart moving along the dried mud takyr path, some holding their coats and some their sheepskin hats under their elbows.


~from "One of the Seven is a Scoundrel"

©2018 Nancy Horner. All rights reserved. If you are reading this post at a site other than Bookfoolery or its RSS feed, you are reading a stolen feed. Email bookfoolery@gmail.com for written permission to reproduce text or photos.