I Know You Know by Gilly Macmillan 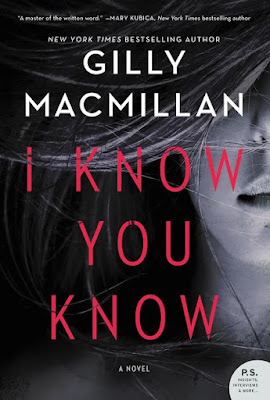 Cody Swift was 11 years old when his childhood best friends were murdered. A mentally challenged young man was sent to prison and has since killed himself. Now, Cody has decided to investigate the murders. Was the right man found guilty? Or, were there details that were overlooked? Cody and a friend have created a podcast to describe their findings as they return to Bristol and travel to visit people who were involved in the 20-year-old investigation.

Detective John Fletcher held one of the boys in his arms as he died. He was happy to quickly close the investigation and put someone behind bars. But, now that Cody Swift's podcast is drawing attention and a new body has been discovered in the same area, a new investigation has been opened and he can't help but wonder if there's a connection between the murder of the boys and the newly-discovered, long-dead man. But, there's more to John Fletcher than meets the eye. What happened during the investigation? Was the lead investigator set up? If so, who was involved and why?

Jess lost her son Charlie 20 years ago and it's been a difficult journey, since. Since Charlie's death, she's felt profoundly guilty, but not for reasons you'd expect. On the night of their disappearance, Jess was gone for many hours. She was never a suspect but those hours have not been explained. With Cody digging into the murders, Jess is nervous. She doesn't want her carefully crafted new life upset and the secret she's kept from her daughter exposed. She knows it will upset her husband but, in need of help, she contacts a crafty and dangerous man, the only man who can help her because he knows her better than anyone. Will the truth of what happened that night be revealed?

OK, where to start? I've read 2 out of 3 of Gilly Macmillan's previous books and I liked them. What She Knew was the first, I think, and it shared a detective with Odd Child Out. I'm not sure of the order but I think Odd Child Out was the more recent one. I liked where the author took that detective and thought the second book I read was even better than the first, which was good but uncomfortable. So, I was hoping this next entry, I Know You Know, would continue on with the same detective. It did not. He's not in the picture at all. There's a whole new cast of characters. It took me a little time to adjust to that, but I found the story intriguing and Gilly Macmillan's writing flows nicely, so her books are always quick reads. I enjoyed that about I Know You Know.

I had some problems with this particular title, though. First of all, Fletcher is a confusing character. You know that he held this child while he was dying and later on, at least one police officer says watching someone die and not being able to save them impacts you for life. So, what's revealed about his character is baffling and there were actually some things that made me think, "I don't buy that." How could he do this if he felt that? That was the sensation I was left with. Obviously, what he did that I found suspect is spoiler material, so I have to keep it vague. However, this question stuck with me throughout the reading. If Gilly Macmillan's writing was a little rougher, I might have given up the book because of this particular problem. But, her writing seriously flows and she's good at pulling you in, so I just kept thinking, "Wait a minute," about every 50 pages or so. Weird, but true. Maybe others can shrug it off completely.

There's also the question of the new body. Whether or not it's connected to the bodies of the boys, why wasn't it found 20 years ago? It's found in the same location, just buried a bit deeper. That eventually would nag at me, although it takes some time before that particular murder victim is identified and his story revealed.

Recommended with hesitation - If a few plot holes don't bother you and you're a mystery fan, you might enjoy I Know You Know. But, for me personally, it was the worst of the Gilly Macmillan books. It was her writing and some well set-up questions that kept me going. I wanted to know how the story ended. I was confused about certain elements, but I couldn't put the book down. The ending, however, was terrible and ruined the read entirely for me. As I'm reading, I'm often mentally scoring a book. It was a 5 for a while because it sucked me in, then a 4 when I started to question certain elements, then it bounced between the two for a while. The ending knocked it down to a 3 and if I'd known it would end that way, I'd have ditched it in spite of how the pages flew.

I Know You Know just did not work for me. Having said that, I think readers who are not quite as picky as I am will likely enjoy it. My general feeling as I put it down: kind of pissed off. Worth mentioning: there are a lot of not-nice characters and that actually doesn't bother me but I'd recommend against reading it if you need someone to relate to. I think the ending was meant to be triumphant for one of the characters, but instead it just made me dislike that character even more. So, the ending just flat did not work. However, I've enjoyed Macmillan's writing style every time I've read it, flaws and all. I will not continue reading her work if she lets me down this thoroughly, in the future, but I'll give her another chance.