Never Satisfied: The Story of the Stonecutter by Dave Horowitz (Children's Week #1) 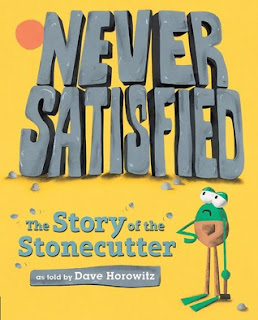 Never Satisfied: The Story of the Stonecutter is a circular tale about a stonecutter who wishes to be something else. Cutting stone is not an easy way to make a living.

One day, on his way back from the rock quarry, Stanley noticed a businessman just sipping tea.
"Hmmf," said Stanley. "That must be nice. I wish I were a businessman."

And, with that, Stanley is suddenly transformed into a businessman. But, he doesn't stay satisfied for long. He looks out the window and sees the king passing by. The king doesn't even have to walk. He's being carried down the road in a sedan chair. Stanley wishes he were the king. Again, his wish comes true and he is instantly transformed into the king. But, then the sun beats down on his head and Stanley realizes that everyone must look up to the sun.

Stanley goes from being a stonecutter to a businessman, businessman to king, king to the sun, sun to a black cloud that blocks the sun, black cloud to the wind that pushes clouds away, and then . . . he finds that the one thing he can't budge as the wind is a great stone. Stanley wishes to be the stone because surely nothing could be greater. And, then along comes a stonecutter.

At the end of the book, Stanley realizes that he was  meant to be a stonecutter all along. But, that's left unsaid. It's clear Stanley is going to wish to be what he was in the first place.

Highly recommended - Never Satisfied is book worth talking about with a lesson every child needs to learn. At Goodreads, there are only two of us who gave Never Satisfied 5 stars, which I confess surprised me. I think it's a lovely tale with a "grass is greener on the other side" theme that opens up a terrific opportunity to talk about being happy with what you have. Love the bold but simple illustrations, as well.

There's an author's note at the beginning of the book that is of unusual interest. Dave Horowitz had a dozen books published before his frustration with the difficulty of the job led him to change fields. He became a paramedic and it was another paramedic who told him the story of the stonecutter. Clearly, he learned the lesson of the stonecutter. I love it that this particular tale is one that the author learned from and that he returned to writing and illustrating books as a result. I'm curious whether or not he's remained a paramedic, as well. I can't think of many jobs that are harder than emergency medical care, so I was doubly surprised at the direction the author went when he changed jobs.

Never Satisfied is Book #1 for Children's Week. I'm dedicating this week to reviewing children's books because I have quite a substantial stack to review. There should be several reviews per day. It just depends upon how much time I have, how many I manage to crank out.

©2018 Nancy Horner. All rights reserved. If you are reading this post at a site other than Bookfoolery or its RSS feed, you are reading a stolen feed. Email bookfoolery@gmail.com for written permission to reproduce text or photos.
Posted by Bookfool at 12:19 PM