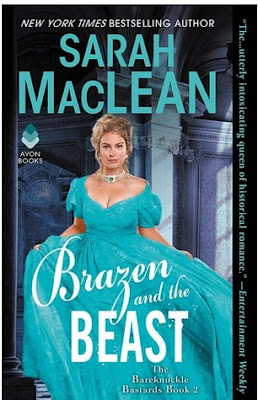 Note: I posted earlier about not being able to finish this book due to a migraine (which I still have, although it's at least a lesser migraine, at this point). Brazen and the Beast is now a DNF at 139 pages out of nearly 400, so I'm going to go ahead and write about it on time (but a little later in the day than I normally would).

In Brazen and the Beast, Hattie (Lady Henrietta) is about to turn 29 and has decided to make the next year of her life "The Year of Hattie". To that end, she's written a vague list to remind her of what she plans to work on. She wants to inherit her father's shipping business and she has the know-how to run it. Her brother, to whom the business normally would pass on, is not naturally adept at business. But, she also has decided she wants to remain single. She is not overly attractive. Her nose is a little too big and she's slightly chubby. She knows that at her age the only thing that will attract a man is her dowry and she doesn't want that. So, she's decided that the first order of business is to be deflowered.

Whit is known in Covent Garden by his nickname, "Beast". When Hattie and her friend Nora sneak out of Hattie's Mayfair home for the deflowering, they find the Beast unconscious and tied up (badly) in the family coach. He is the handsomest man Hattie has ever seen. He's also a very dangerous man who runs a business out of Covent Garden; and, someone has been stealing from him. He wants retribution. Hattie quickly figures out that the thief is her brother. She unties Beast, gives him a kiss, and pushes him out of her carriage.

When Beast follows Hattie to the house of ill repute, she makes him a deal. She will recover his stolen goods. In return, she wants him to do her deflowering. She goes home to patch up her wounded brother and make a plan.

I continued to read for a while, thinking the author would now back up a bit and allow the characters to slowly develop a relationship, which is my preference. In romance, I like to see interaction between characters. What draws them together? What do they have in common? I don't read romance for the sex scenes because I don't even like them; they don't advance plot and I'm a plot lover. I prefer an author to basically tiptoe around the bedroom and show me how people truly fall for each other — not just the raw hormonal stuff but the little things like the way one will pick up on the other's joys and heartaches, observe their preferences for things like food or flowers, find ways to make them smile or laugh.

Brazen and the Beast is more about sex and Hattie's plans for her future, at least so far, and less about interaction. There's also an awful lot of bad language and not long before I closed the book there was a sex scene (no deflowering, yet) that actually grossed me out. If a lot of sex and a dark hero are characteristics that you prefer in a romance, go for it. So far, though, I can't say there's a single thing about the two characters that I would call attraction apart from the physical except for the fact that both are strong-willed and they like that about each other. And, to be honest, I'm wearying of the Alpha Male Rogue/Bad Boy archetype.

A note about the hero: he is the strong silent type and he does a lot of grunting and groaning, along with using the f-word (which I don't mind, in its place, but it feels overused for the time period, especially in the presence of an upper class lady). He may be handsome but I do not find this hero appealing and I can't get behind the heroine, either. There's just not enough character in either to keep me reading.

I received a copy of Brazen and the Beast from Avon Romance in exchange for my honest review. My thanks to Avon! I may not have loved this one but I appreciate the opportunity to try an author who has been on my mental wish list of authors to read.