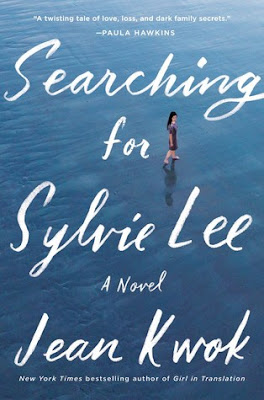 Sylvie and Amy Lee's grandmother is dying. Amy doesn't really know her but Sylvie spent the first 9 years of her life in the Netherlands, living with her aunt and uncle, her cousin, and her grandmother. Their parents live in the United States and Amy is still living at home, taking a break from school, when Sylvie takes off for the Netherlands to say her final goodbye.

Sylvie is the smart one, the pretty one, the successful daughter with a husband who comes from a wealthy background. Amy has dated around but lacks her sister's confidence and success. Sylvie has helped support her family. But, now she's disappeared in the Netherlands.

Mrs. Lee, known as "Ma" in the book, does not appear to be particularly happy. During her early years as a mother, she and her husband were struggling. So they sent Sylvie to live in the Netherlands and then brought her to the U.S. when her little sister was 2 years old. Ma still doesn't speak English well and keeps to herself.

When Sylvie disappears, Amy flies to the Netherlands to look for her. There, she discovers the strange relationships between Sylvie and their aunt and uncle are not at all what she expected and that their grandmother's treasure, a bag of jewelry she's kept for decades, has gone missing. During the weekend of their grandmother's death, Sylvie went on a quick trip to Venice. What happened in Venice? Could the people who traveled with her have anything to do with her disappearance? Did Sylvie take the gold? If she did, did someone kill her for it? What happened between Sylvie and her husband? Why was Sylvie taking music lessons in the Netherlands and what's the deal with the man who taught Sylvie and insinuated himself into Amy's life?

Through the voices of Sylvie, Amy, and Ma, we get to know the stories of 3 Chinese-American women, their experiences as immigrants in two different nations, the secrets they've kept, and how racism and family dynamics effected their lives, against the backdrop of a mystery.

Highly recommended - So many questions to keep the pages turning. I found Searching for Sylvie Lee utterly gripping. The only problem I had with it is the fact that what became of Sylvie is given away (but not in its entirety) about 2/3, or maybe 3/4, of the way into the book via a newspaper article. I'm not sure why the author chose to insert the news articles (there were 2 or 3) but that particular one was a little deflating and I took a point off for that. Still, there were plenty of mysteries remaining and by the end of the book, Amy and Ma's stories had become dominant as Amy's time away from home helped her build confidence and a surprising revelation explained much about why Ma behaved as she did. All of which is to say, Searching for Sylvie Lee was a very intriguing read.

I received an ARC of Searching for Sylvie Lee from HarperCollins in return for an unbiased review. Many thanks!