Mini reviews - If I Die in a Combat Zone by Tim O'Brien, Extreme Ownership by Willink and Babin, and Cat Poems by a variety of poets

Hard to believe, but I'm caught up on reviewing books I've read that were sent by publishers, so I have a couple days to write about the books I've read from my own shelves or borrowed. Then, hopefully I will have finished another ARC by the time I'm done catching up on personal reads. 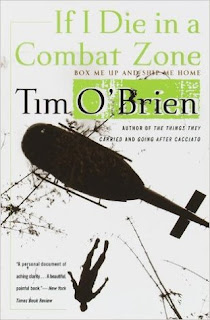 After I read The Things They Carried by Tim O'Brien, I put a number of his books on my wish list at Paperback Swap and managed to acquire 2 or 3 of them before relinquishing my membership. If I Die In a Combat Zone, Box Me Up and Ship Me Home was one of them. I acquired every title I could get my mitts on without bothering to even read what they were about; that's how impressed I was with The Things They Carried.

If I Die in a Combat Zone is O'Brien's memoir. I didn't realize that till I opened the book and started reading. I read it specifically for Memorial Day. It was my little way to keep those who died for our country in my head and heart over the holiday weekend.

O'Brien tells about his life and his plans prior to being drafted, how he waffled about whether to show up for duty or run to another country and made actual plans to escape but then decided to report, his experiences with training and throughout his year in Vietnam, how he managed to go from dangerous jungle duty to a clerical job toward the end of his deployment, and his return home.

I had mixed feelings about If I Die in a Combat Zone. It's every bit as beautifully written as The Things They Carried, but the feeling I got from it was deeply sad and painfully honest. He was witness to some horrible atrocities, watched people die because of stupid decisions by his superiors with inflated egos, and lived with the knowledge that at any minute he could be amongst the maimed or dead. The only real light in the proverbial tunnel of O'Brien's war seemed to be the friendship he had with another man who was well-educated in literature. But, even then, the two of them occasionally got in trouble for having the nerve to sit around talking about poetry. It was a dark experience, overall, and it's hard to read. When he got that clerical job and then climbed on the plane and returned to Minnesota, I felt utterly relieved to have his combat days in the past. I love O'Brien's writing, though, and I still gave it 4 stars. Recommended but will rip out a piece of your heart.
Contains graphic violence. 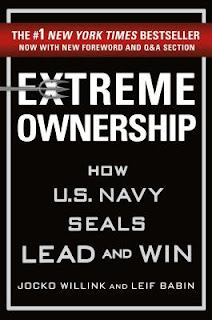 Extreme Ownership: How U.S. Navy Seals Lead and Win by Jocko Willink and Leif Babin is a business book but because it's written by two Navy SEALs, it can be surprisingly gripping as they relate tales of their experiences in training and on deployment in Iraq. My husband has read Extreme Ownership at least twice and wanted me to read it but I'm not exactly sure why. I opened it up when he handed it to me and was surprised at the intensity. It begins with a story of a SEAL mission in which a potential terrorist ran from the building they'd surrounded. Willink pursued him and then realized, when he captured the man, that he had chased the man down without informing anyone where he was going. He had to make a critical decision about how to handle the prisoner and return without getting them both killed. He then applied that decision-making process to a particular business problem. It was fascinating and I was hooked.

The theme of the book, "extreme ownership" is about taking responsibility when things go wrong, the idea being that solid leadership and well-coordinated teamwork are the best ways to solve problems in business, but it's important for leaders to take responsibility when something goes wrong in order to lead well. "There are no bad teams, just bad leaders," is one of the quotes I highlighted after reading what I considered one of the most fascinating illustrations of leadership in the book. I don't recall which author told this story, but one of the men described a particular part of SEAL training in which the soldiers were divided into teams. Each team carried a heavy boat and raced it. He described how one team was consistently winning and another repeatedly came in last or next to last. The leader of the losing team thought he'd just ended up with a bad bunch of teammates. But, then the leaders were told to switch boats and the team that had been coming in last won. The team that had previously won still did well. I would have loved to see an actual film of the leaders of those teams in action.

Highly recommended - I've tried to apply the leadership principles to marriage by explaining to my husband how it benefits him to listen to my housekeeping leadership. Unfortunately, it's not working. I hope the principles do better for him at work than they have for me at home. I'd like to know what Jocko and Leif have to say about stubborn men who just don't get why socks need to be placed in the laundry right-side-out. 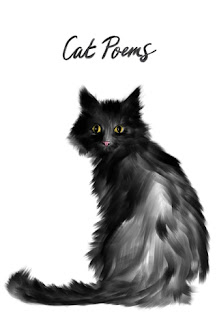 Cat Poems does not list an editor but it's an anthology of poems about cats, obviously. I got a copy of Cat Poems for Mother's Day from Kiddo and his fiancée.

The problem with an anthology about a particular chosen subject is that editors don't always go into the selection with the people who appreciate that subject in mind. I read a book of poems for and about children, a few years ago, in which some of them were actually quite dark — about the loss of a child or the horror of abuse, for example. They covered all the bases but it wasn't always pleasant. The same is true of Cat Poems. Some of them are funny or sweet, about the things a cat lover adores. Others are frankly awful, either because they're negative about cats, cruel, or sad.

My favorite was a poem by Muriel Spark, "Bluebell Among the Sables." The poem is about a visit from a friend wearing expensive sables. Muriel was bored by her social obligation to entertain the friend. Then, Bluebell began to attack the tails of the sables on the woman's coat and it diverted her. It's a cute story but short enough to relate through poetry. It was those poems in which the cat is recognized and appreciated that I obviously liked best, being a cat lover.  No surprise there. I'm iffy about recommending Cat Poems because I found some of the poetry downright upsetting, but I will definitely reread my favorites.

©2019 Nancy Horner. All rights reserved. If you are reading this post at a site other than Bookfoolery or its RSS feed, you are reading a stolen feed. Email bookfoolery@gmail.com for written permission to reproduce text or photos.
Posted by Bookfool at 10:08 PM