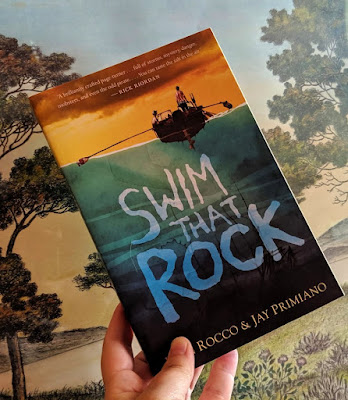 
Yep, that's the only arrival. And, it was one of those, "Oh, I'm here anyway (at the evil online megastore, sorry), I might as well just toss this in the cart," things. I read an Instagram review that described Swim That Rock as a marvelous adventure. I love adventure! Action! Excitement! Should have bought it when it was discounted, though. Do you realize that if you put something in your cart at Amazon and don't immediately buy it, the price will go up? And, then if you take it out of the cart but save it for later, the price still won't go down? However, if you leave it for months, there's a possibility the price will drop. It's not likely, but sometimes it happens. Usually, when the price goes up on something after I return, I abandon it forever because jacking the price up ticks me off. Amazon might want to rethink that practice.


All three books were solid reads. I started typing this up on Friday because we were expecting Tropical Storm (then Hurricane, Tropical Storm again, and finally Tropical Depression) Barry to menace us, over the weekend, but it turned out that it was just rainy, not stormy, so I'm back to work on it on Sunday. Saturday was brilliant. If you're in just the outer bands of a hurricane or tropical storm, often what you'll get is light rain and cool temperatures. And, that's exactly what happened. The temperature dropped 25° — from 101° to 76° — in two days. We were excited to have an unexpected opportunity to sit outside. Today, though (Sunday), the rain has been heavy and occasionally blown in sideways so that the covered patio is too wet to enjoy, although we tried once and were driven in by a gust that got us good and wet. Ah, well. The cats and I have been happily reading indoors.


I'm in between books. But, I plan to read a little of The Mueller Report, today, and then I'll decide on a fiction title to start, next. I thought I had a book tour, this week, but the publicist never contacted me and a book did not arrive, so my week is clear of any specific reading obligations. I'm happy about that, hoping that will give me the opportunity to focus on finishing The Mueller Report. I'd like my next fiction read to be one that can tolerate being a side read till I'm done with Mueller. At this moment, I'm waffling between starting Searching for Sylvie Lee or Rosie Colored Glasses. Or, maybe Never Have I Ever. We'll see what grabs me.

Since we've finished the last available season of The Heart Guy aka Doctor Doctor, we're back to watching Season 3 of The Royal. And, I've begun to watch Tutankhamun, which I primarily began watching because Sam Neill is in the cast. He plays Lord Carnarvon, the man who financed Howard Carter's search for Tut's tomb. I would describe Tutankhamun as "bland, but watchable," and I confess I just like seeing events that I've read about brought to life, so I'm willing to put up with a little bit of "Yeah, sure." Plus, Sam Neill. He isn't always in the picture but I like him.

I also still occasionally watch an episode from Star Trek: The Original Series, Season 1. I'll be watching the original series, off and on, for a long time. I've maybe managed to watch 11 or 12 episodes out of the full 79, so far.

We passed the danger zone for Fiona kitty and she is back to her energetic self. It took her a couple of days to get her energy back. And, it took about 2 1/2 days before Isabel stopped hissing at her, 3 days before Izzy began to tentatively approach Fi and give her a sniff and a little head bump, 4 days before Isabel was begging Fi for a cuddle and Fiona started brushing her away. To Fi's credit, when Isabel was hissing at her she remained totally passive and once even rolled over on the rug where she was sleeping, turning her back on Izzy. That was kind of a funny moment. Isabel just stood there looking at her like, "Wait, what? I'm hissing at you! Aren't you going to react?" Cats are like comedians wrapped in fur. So entertaining.

©2019 Nancy Horner. All rights reserved. If you are reading this post at a site other than Bookfoolery or its RSS feed, you are reading a stolen feed. Email bookfoolery@gmail.com for written permission to reproduce text or photos.
Posted by Bookfool at 12:59 PM