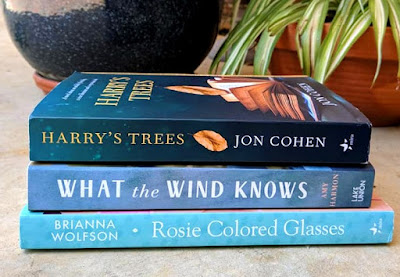 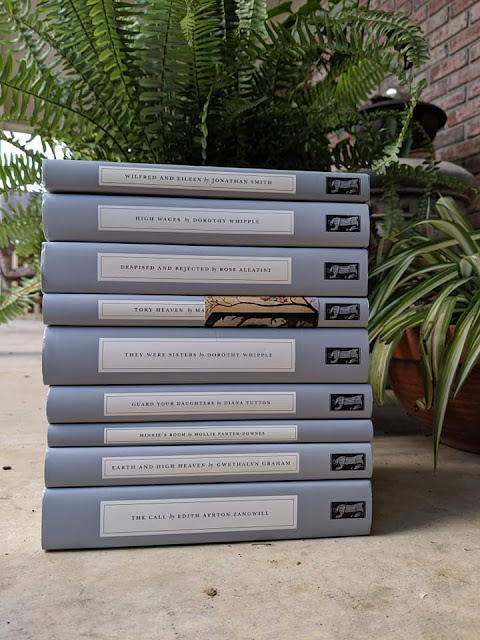 
So, this requires a bit of explanation. The first two books in Photo 1 are from Harlequin's Mira imprint for review. That's self-explanatory. The third, What the Wind Knows, is a book a friend recently read because she was going to Ireland (she's there now, in fact) and when I found out it's a time travel and that it was nicely priced, I jumped right on that sucker. There is absolutely nothing I love better than a good time travel.

Photo 2 is obviously a stack of Persephone books. I don't recall whether or not I mentioned that Huzzybuns was in London on business, last week, but he knows how much I love London (it's my favorite big city) and felt just awful about not being able to take me because the ticket prices were outrageous. For over a week before he left, he hounded me about writing a list of books to buy at the Persephone store and told me to make it a big one. I wrote a list of 10 titles but absolutely did not expect him to buy 9 of them! That's a pretty big guilt purchase, there. When he arrived home, I was so excited that I walked around with them, posed them in several places, and carried them around some more. Kinda wishing I didn't have such a backlog of ARCs, now, as you can imagine. I would love to dig into them immediately but I just can't. Because he made such a large purchase, he got a free tote bag and they threw in a catalog and the latest Persephone Biannually.


Guess why I had such a great reading week? Because I decided if Huz was going to get to go have fun (he can squeeze fun in around a conference; it's a skill), I was going to have some, too. So, I declared last week a "Staycation Week" and spent my time reading, writing, doing a preliminary sketch and then sketching a second time on a canvas (this painting is going to take a long time), exercising, and doing a minimum of chores — just laundry, dishes, and whatever else was necessary, no deep cleaning or big jobs. I went to sleep when I felt like it, napped when my eyes got heavy, and had an all-around good time doing what I wanted. Back to normal chores, this week, but I definitely feel refreshed.


I kept my word and returned to The Unspeakable Mind when I finished Extreme Ownership (which my husband asked me to read and we've already discussed but plan to discuss some more). I should finish it tonight or tomorrow; it's a quick read, really. It's just been sitting on the "current reads" stack, waiting for me to return to it. Strange Weather in Tokyo is a book I bought based on 1) The amazing cover, and 2) A review by a friend at Instagram. So far, it's not dazzling but I'm enjoying it for the setting, as much as anything. And, I like to admire the cover. I dug in my little bin of paper products from Japan to find a Japanese bookmark to use in Strange Weather, as you do.

When I finish The Unspeakable Mind, I'm planning to focus on finishing up The Mueller Report (which may take a couple weeks, since I haven't gotten that far) so that I can move on to the nonfiction ARCs in my July pile.


I was very pleased with myself for still managing to post during my staycation. Now, we'll see if I can do as well this week.

I'm nearing the end of Season 3 of The Heart Guy (aka Doctor Doctor) and noticed that Charlie is hiding her belly behind pillows, tables, and long jackets. So, I looked her up to see if the actress was pregnant during filming. Sure enough, she had a baby in 2018. Even better, I found out there will be a 4th season! Woot! I love this show.

I also watched a few episodes from Season 1 of Star Trek, the Original Series. I've been watching an episode, off and on, for a couple months but it's not a regular thing and, wow, a season had a ton of episodes, back in the Sixties. 25, I think? I've been a half-hearted Trekkie since I was a kid (not the convention-going kind, but more someone with a quiet affection for the series that doesn't always translate to newer iterations) and it's fun revisiting the original series.

©2019 Nancy Horner. All rights reserved. If you are reading this post at a site other than Bookfoolery or its RSS feed, you are reading a stolen feed. Email bookfoolery@gmail.com for written permission to reproduce text or photos.
Posted by Bookfool at 2:14 PM