The Haunting of Henry Davis by Kathryn Siebel 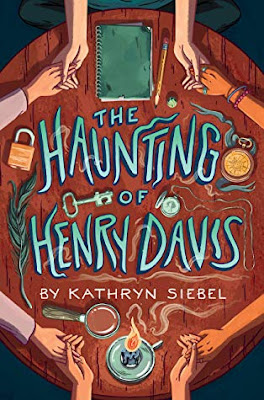 Henry is new to Barbara Anne's 5th grade class. He's super nerdy-looking and nobody wants to have anything to do with the new kid. He sits alone sketching when he's not working on a project with the kids at the table he and Barbara Anne share. Then, one day, Barbara Anne and Henry start sneaking out of the lunch room early and they slowly get to know each other. Henry's not so bad, really. But, there's one really strange thing about Henry: he's being haunted and the ghost is following him around everywhere.

Barbara Anne comes up with an idea. They need to find out a little about Henry's ghost so they can figure out how to get rid of him. Once they figure out his name is Edgar, they begin to uncover other clues. And, then the two classmates who share a table with them join in. Who was Edgar? How did he die? And, how does the scary old lady in the neighborhood know about him? Once they find the answers, maybe they can help Edgar move on.

Recommended but not a favorite - It took me a while before I became really engrossed in The Haunting of Henry Davis. That seems to be a common problem with the middle grade books I've read, this year. Is it me or the books? I can't say. Maybe a little of both. At any rate, the clues were dropped slowly enough to keep the story a little mysterious, although adults probably will be familiar enough with the events around Edgar's death to guess what happened to him, early on. I did, but that didn't bother me at all.

I liked the growing friendship between Barbara Anne and Henry, as well as the way the other two kids ended up helping out and becoming friends with them. And I enjoyed the story once it got cranked up. The ending is lovely. I did have a little trouble with the author occasionally mentioning a new person and then describing them in the following sentences. In fact, I got so confused when that happened the first time that I literally went back and started the book over again, thinking I'd missed something (not a big deal; I was still in the first or second chapter). Nope, it was just a stylistic thing, I guess. Other than that and a slow start, I thought The Haunting of Henry Davis was entertaining, if not a personal favorite.