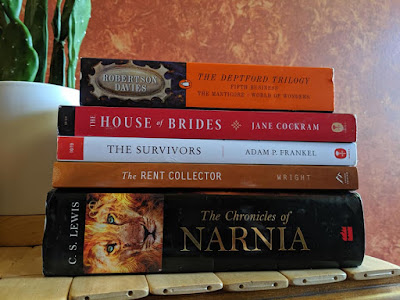 The Deptford Trilogy purchase is author David Abrams' (Fobbit, Brave Deeds) fault . He's been reading 1000 Books to Read Before You Die and describing one book per day. So far, I've resisted buying everything that tempts me (good thing, too, since I haven't read all 1,000 . . . nowhere near) but The Deptford Trilogy sounded fascinating and a bunch of people gushed about how much they loved it in the comments beneath his posts (one at Facebook, one at Instagram). I managed to find a used copy at a reasonable price.

I overestimated my ability to balance deep cleaning my house for guests and reading. Searching for Sylvie Lee was the only thing I read at all till . . . I think Friday? After I finished Sylvie Lee, I moved on to Never Have I Ever by Joshilyn Jackson. I'm almost finished (50 pages left). It's a quick read and I knocked most of it out by reading between chores. Last night was the party, hosted by Kiddo and Future Daughter-in-Law, and we were invited. But, then, we were also tasked with clean-up and by the time I got to bed I was bleary-eyed. I couldn't read a word. No Mueller Report reading, this week. Oh, well.

There's not much other news. We watched a couple episodes of The Royal, but nothing else except for part of the broadcast of the moon walk on the BBC.  Funny that we ended up watching it on a non-American network. I did a little painting, early in the week, but then I was busy with chores and that included cleaning up my messy painting corner because everyone has to walk past it to get to the patio and the party was being held on the patio . I have finally bought an adjustable easel that can be used for large canvases! Yippee! No more sore shoulder from reaching up to the top of a canvas from a seated position on the floor.

This week, I hope to squeeze in a lot more reading than a single book!


©2019 Nancy Horner. All rights reserved. If you are reading this post at a site other than Bookfoolery or its RSS feed, you are reading a stolen feed. Email bookfoolery@gmail.com for written permission to reproduce text or photos.
Posted by Bookfool at 2:08 PM