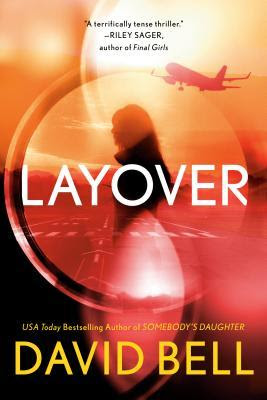 When Layover by David Bell opens, Joshua Fields is in the hospital with a concussion and a police officer says, "Tell me where she went." You have no idea who the woman in question is, nor how Joshua ended up fighting with another man. It's a typical prologue beginning, teasing you with what's to come so that all the way through the book you're aware that there will be a final conflict that lands Joshua in the emergency room.

Then, Joshua's story returns to the beginning. He alternates chapters with Detective Kimberly Givens, the officer questioning him in the ER. Givens is under pressure by her town's mayor to find a missing man but really just wants to spend time with her daughter, who is on a school break.

Joshua Fields is a real estate developer who travels constantly and is terrified of flying. He carefully times the ingestion of his anti-anxiety meds so that he'll be calm and maybe even sleep off his flight but will be awake and able to function when he reaches his destination. On this day, he's headed to Tampa. But, then he decides to stop in a bar before going to his gate and there he meets a mysterious woman.

Morgan has a hat and sunglasses on indoors. She's clearly nervous and is unwilling to leave her bags for anyone to watch, even for a quick visit to the bathroom. At first, she really doesn't want to have anything to do with Joshua, but then she opens up to him and he doesn't want the acquaintance to end, even after seeing her described on TV as a missing woman.

On impulse, he changes his ticket from Tampa to Nashville to follow her. Why is Morgan traveling incognito? What is she hiding and why is she thought to be missing? How much of the story Morgan has told Joshua is true? And what, if anything, does Morgan have to do with the disappearance of another missing person?

Recommended - Layover is a fast-paced, rollercoaster ride that had me sneaking in pages whenever I could find a spare moment. There are some plot points that are a little disappointing — a bit lame, at first appearance — but I was enjoying the book enough that I decided I'd just wait and see whether those things were misleading. Morgan is an unreliable character, so parts of the story she tells Joshua (which sound shrug-worthy) seem likely to be more complex than they appear. Is she telling the truth or is there a more sinister reason for her disappearance?

One of the things I like best about Layover is that Joshua does stupid, impulsive, even unconvincing things, and yet there is still some logical action on his part. He's not afraid to get the police involved, trusts his instincts and acts accordingly, and he's always cognizant of the fact that his father, with whom he works, will be worried when he doesn't check in, yet he still manages to lose track of time and forget to return calls. In other words, he's a much more believable and likable character than most. I often have trouble with characters who decide not to get police involved when it appears their lives may be in danger. I liked Joshua because he seemed so normal. I gave Layover a 4/5 at Goodreads and I will be looking for more by David Bell.

I received a copy of Layover from Berkley Books in exchange for an unbiased review and it was absolutely what I needed at the moment I picked it up. Thank you!