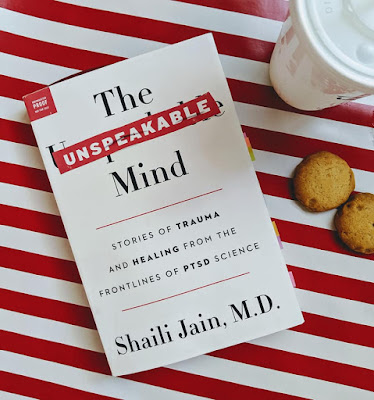 UPDATED: I pre-posted my review of The Unspeakable Mind last night and when I reread my review, this morning, I didn't like it. So, I've updated my review to try to clarify a couple things I think I muddled in the original description.


PTSD rates skyrocket in children who endure traumatic events that ravage their communities. How parents respond to the trauma and how close (geographically) the child is to the epicenter play a crucial role in determining outcome. Parents and caregivers who are able to be emotionally supportive and are not traumatized themselves exert a protective effect that reduces the odds that a child will develop PTSD.

~fr. p. 114 of The Unspeakable Mind, Advance Reader Copy (some changes may have been made to the final print version)


When a woman has a traumatic birth, there was something subjective about the birth that was distressing. This does not have to be life-threatening or medically traumatic. We are thinking of the psychological impact of that birth experience on the mother.

Birth Trauma definitions include "a negative and disempowering physiological and emotional response to a birth." Common themes include feeling unheard or not listened to, a lack of compassion from medical professionals, and feeling out of control or helpless.


I'm going to mention the things that bothered me about The Unspeakable Mind, up front, and then work my way into why I highly recommend the book, anyway. First, something I've mentioned in previous posts is that I often have difficulty with psychology books because they don't give you the full story. They'll describe a case but not tell you how it concluded. Did the patient improve? How is his illness being managed? Is it likely he'll relapse? Often, you'll only hear about what led up to the psychologist's involvement and some of the treatment without any form of resolution, whatsoever. In The Unspeakable Mind, there was an additional problem: one particular treatment method was referenced repeatedly but never fully described. There's a glossary, but even in the glossary it made little sense, at least to me. But, in general, the writing was clear enough that a few minor issues weren't enough to lessen its readability overall, nor its importance.

It wasn't till I'd set aside the book in frustration and given it time to sit before I was ready to deal with what I saw as its challenges. Then, after finishing The Unspeakable Mind I found out it's not even actual cases that are being described but composites — a made-up patient is described with a particular inciting incident that brought them in for treatment. For example, a former soldier who was traumatized during his deployment found that drinking helped him cope with social situations, which made him particularly uncomfortable. He showed up already drunk to a family barbecue and the smoke from grilling meat triggered his PTSD, making him think he was under attack. Without realizing what was happening, he flew into self-defense mode and started attacking his own family. The author describes these events as if they really happened and then what would have happened to him after he sat down with her. But, he's a composite of several patients, not a real person, and you don't ever find out whether he recovered because . . . well, you can't, since he's not real, although occasionally there may be a satisfactory conclusion to one of the stories. It's still false, but at least it gives you the sense of completion.

It wasn't till after I finished The Unspeakable Mind and had some time to let it roll around in my head that I really understood the need for the conceptual nature of the illustrations: to protect individuals — clearly, it's hard enough to keep anything private in today's electronic world. It's not necessary to describe actual cases in order to explain the concepts: how or why certain events can be traumatic, how people may react (burying the memory, having nightmares, becoming violent or depressed) and what the treatment options are, whether or not they've been shown to work, what new treatments are being tried, etc. In other words, The Unspeakable Mind gives you a well-rounded overview of trauma and its treatment. You really don't need to know about any actual individual's experience; it's only necessary to illustrate how trauma could have occurred and treatment may been handled. I'd prefer that the author mentioned that up front, though. I put the book down because of frustration with the lack of conclusions, not because of the writing, which is solid. Understanding the reason they might not have a conclusion might have helped a bit.

At the beginning of the book, PTSD is described as a trauma brought about by an experience that threatens either one's life or the life of one they care for. If you see your daughter being held at gunpoint, in other words, you're just as likely to get PTSD as the daughter with the gun pressed to her side. But, later on in the book, other traumas like the Birth Trauma that's mentioned above are described. So, you don't always have to have a near-death experience to be traumatized and, in fact, even unborn children can be damaged by the trauma experienced by a pregnant mother.

The contents include a description of how and why the author decided to study and treat traumatic stress, the history of how trauma has been described and treated, mistakes in diagnosis ("overdiagnosis and underrecognition"), what happens to a traumatized brain, how trauma can be passed on through generations, the meaning of dissociation, physical effects of PTSD (addiction, cardiac disease), danger to those around the traumatized, types of trauma experienced specifically by women, suicide prevention, treatments, and preventing trauma itself (by immediately treating those who have been through known traumatic incidents), and more.

Highly recommended - I learned a great deal from The Unspeakable Mind. Throughout the book, the author shares the story of her father's trauma, which occurred during the Partition of India in 1947. I particularly enjoyed that personal touch. I also appreciated the writing for the broad overview of different ways in which people can be traumatized, how they've been treated in the past and what new treatments are being used, what exactly is considered traumatic enough to fall under the category of Post Traumatic Stress Disorder, and what helps or hinders treatment that may actually lead to a cure.

The bottom line seemed to be that the most important factors in prevention and recovery are acceptance that a person has been traumatized (by friends, parents, and police in the case of rape, for example) and a good social support network to help them through the aftermath. I lead kind of a sheltered life but still know several people who could have been featured within the pages of this book, so that speaks to me of how easily one can be traumatized and the fact that all of us are probably related to or friends with at least one person who has PTSD. For that reason, I recommend it to everyone because it may help readers learn the importance of being in someone's support network.

A side note: I deliberately included the first excerpt because it describes the danger of separating children from their parents and then mistreating them. Not only does the separation enable the development of PTSD by removing the supportive network that anyone needs in a traumatic situation, the book also describes the physical damage done to a child's brain when traumatized. This seems an important and timely subject in America.

I received a copy of The Unspeakable Mind from HarperCollins in exchange for an unbiased review. Many thanks!