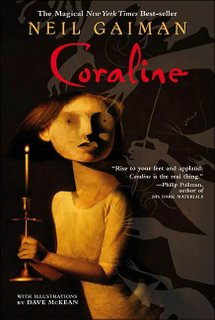 My first Neil Gaiman book, fourth creepy book for the RIP challenge, and a book that served as a mental break because this has been a migraine week and the doctor still has not called in a refill of Maxalt (I'm just going to have to show up on his doorstep, trip, and knock him over, I guess - migraines whack up my balance completely), Coraline was a nice diversion and a suitably spooky read.

Actually, I can't think of much to say about Coraline, but I think the reason is two-fold:

1. This migraine is killing me; I can't think straight.
2. It was pretty short; the book is, after all, aimed at youngsters.

I will say I found Coraline entertaining and that I particularly liked the fact that in the midst of a creepy, parallel world that she found behind a locked door, Coraline kept her wits about her. I loved the character. And, the dialogue was, I thought, always nicely off-the-wall in a witty but straight-forward way. Coraline spoke her mind but she was never a rotten child, even when she did something wrong that got her into a bind. Instead, she showed courage and intelligence. Although I didn't think Coraline was a mind-blowingly wonderful read, I enjoyed it and it's piqued my interest in Gaiman. I'm hoping to get my greedy little bookloving hands on a copy of Neverwhere, soon. Wish me luck. And, a cure for these darned migraines.