Something Upstairs by Avi 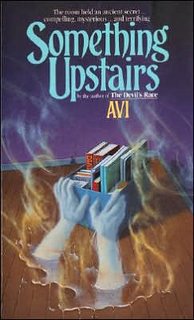 Kenny’s spent his entire life in California. So, when his parents announce that they’re moving to Providence, Rhode Island, he’s horrified. School is weeks away when they arrive at the historical, three-story home in which they’ll live. The good news is that his parents have remodeled the attic and Kenny has a tremendous amount of living space all to himself. The bad news is that he doesn’t know anyone at all and the ghost of a slave is living in one of the tiny rooms adjoining his attic space.

When the ghost asks Kenny to determine who killed him, Kenny finds himself not only looking into the past, but trapped in the year 1800. Will he find the murderer? Can he free himself or will he end up haunting the past the way the slave haunted him in his own time?

I found that I wanted to know the answer to the mystery, and yet I was also stricken by the simplistic writing and the fact that the slave sounded more like Kenny in his mode of speech than like someone from another time. Barnes & Noble sets the age range for Something Upstairs at 12 and up; but, it seemed geared more for a 3rd-grader to me. However, that is neither here nor there. The book may not be challenging but it has an interesting storyline. The history of Providence was the most enjoyable and informative aspect of the book, moreso than the suspense storyline, in my opinion. But Something Upstairs was a fast-moving and enthralling story, not wonderful and not awful so I’ve given it an average rating.

And, that does it for the RIP Challenge, for this bookloving chick. I enjoyed reading creepy books, but I'm ready to move on and simply insert a creepy book into my reading schedule, now and then. Variety spices my life and I tend to dip into a lot of different flavors (or genres, as it were), so I found it a little difficult continuing with the atmospheric, suspenseful, creepy thing after the third book. However, I enjoyed the challenge and am glad I joined in. Thanks to Carl for coming up with the challenge.

Wahoo! Wednesday has fallen by the wayside, this week, due to fatigue, and I may go to bi-monthly Wahoos. We'll see. I considered knocking out 4 wahoos at once: birds, bees, flowers, trees . . . but that's pushing things a bit. I'd rather it was a bit more natural and meaningful, although I know there are many, many women who would be happy to see a new photo of Hugh Laurie every week.