Rainbow's End and Other Stories by John M. Floyd 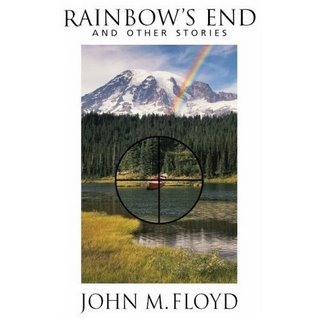 Those who have read my recent posts know the author of Rainbow's End and Other Stories, John M. Floyd, is a friend of mine. I've been referring to the book as simply "Rainbow's End" for simplicity, knowing the title I used was not accurate, as that is the title of the final short story and the book itself is an anthology of John's short stories. Please pardon that bit of laziness on my part.

Because I've known John for-- gee, I'd guess at least a decade?-- awhile, let's say, I read quite a few of the stories in this book when they were first released in various magazines. "The Blue Wolf" and the title story, "Rainbow's End" are two of my old favorites. I'm excited to have them in a nice, hardback book because it has always pained me to part with magazines containing John's stories.

I'm well aware that many people don't like anthologies of short stories and I have to say that anyone who skips this one is really missing something; and, that's not a comment made merely because I happen to know John is an all-around terrific guy (which he most definitely is). I'm not generally a big fan of anthologies, myself, and I tend to read them very slowly so that I can absorb each story before moving on to the next. Anthology-wise, O. Henry, James Thurber, and Vladimir Nabokov are among that few storytellers whose short works make me sigh and think, "Now, *that's* what short stories are all about." The same is true of John Floyd. The hallmark of John's stories-- whether they're mysteries, western, or general fiction-- is a surprising twist at the end. Although I'd read a number of those in Rainbow's End and Other Stories when they were originally released, I'd forgotten how some of them ended and darned if he didn't snooker me all over, again.

Around the middle of the book, there is a series starring a snoopy, elderly woman as the sleuth. I missed a couple of those when they were published in Woman's World and absolutely could not set the book down for the night until I'd gobbled every single one. Sheriff Chunky Jones and nosy Angela (aka "Angel") Potts are a hoot; and, Angela never fails to sniff out a crime of some sort, even if it's not exactly what she suspects. Here's a taste:

Sheriff Jones nodded, still studying the tent. "Okay, Ms. Potts, you can take Ms. Fenwick on home. Fred and me will handle this--"
"Fred and I," she said. "And forget that--I'm staying."
"What?"
"I'm staying here. Bets, you go on home and lie down, I'll call you later." After Betty Fenwick had wandered off, Angela said, "I have a plan."
"I was afraid of that."
"You'll never catch him, in that crowd. What you should do is--"
"Ms. Potts, you need to just let Fred and I--"
"Fred and me."
Sheriff Jones closed his eyes, pinched the bridge of his nose. "Fred, give us a minute, okay?" He waited until his deputy had moved away, then turned to Angela. "Ms. Potts, I wish you wouldn't correct my grammar all the time, I'm not your student any more. And don't call me Chunky in public--my name's Charles."
Oh, hush up. Do you want my help or not?"
"Well, actually--"

Hence, at least one late night and what my husband calls a "reading hangover" (more on that in another post. Some new favorites: "The Proposal", "The Messenger," and "Creativity". But, I enjoyed them all.