Girlfriend in a Coma by Douglas Coupland 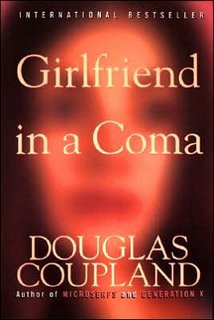 On New Year's Eve, 1992, the five of us were sitting in Linus's underheated igloo of a kitchen around a Formica table playing a lazy poker game, trying to make each other feel noble about the fact that our lives had the collective aura of a fumbled lateral pass.
Rain was pelting the windows; we were using candles, not electric light.

" . . . nobody even has hobbies, these days. Not that I can see. Husbands and wives both work. Kids are farmed out to schools and video games. Nobody seems to be able to endure simply being by themselves, either--but at the same time they're isolated. People work much more, only to go home and surf the Internet and send e-mail rather than calling or writing a note or visiting each other."

"It's like those cartoons of guys with long beards holding a sign on a street corner saying THE END IS NEAR; there's always a little part of you that wonders, what if?"

His mind races: Think about all those crazy people you see on the streets. Maybe they aren't crazy at all. Maybe they've seen what we've seen--maybe those people are us.


*Warning* - Possible Spoiler (I'm not sure, but don't say I didn't warn you, if you plan to read any time soon).

This is going to be an awfully difficult book to describe (it definitely "drips with atmosphere", as per Carl V.'s requirements), but I’ll try my best. Girlfriend in a Coma begins with narration by the ghost of a fellow named Jared, a high school football star who died rapidly of leukemia, leaving his friends shocked and bereft. He describes the moon-barren world of the future.

The story then switches to that of two of his friends, Richard and Karen. After skiing, they return to Vancouver to attend a party. Karen has been starving herself and taking Valium to slim down for a trip to Hawaii. With two Valiums in her system, she has a couple of weak drinks and then slips into a coma. Richard opens a note she has left him, in which she describes strange visions that she’s had of the future, leaving the impression that the world is going to be so horrible that she prefers to sleep rather than face the disaster that will end the world as she knows it.

It’s 1979 when Karen goes into the coma and she stays asleep with no hint of higher brain function for 17 years, her body wasting away. As Karen sleeps, her friends drift off into the adult world but without ever really growing up. Each is empty in his or her own way. When Karen awakens in 1997 and finds out how long she’s been in a coma, she’s shocked by the hollowness of the lives her friends lead, the fact that people no longer have hobbies but plug their selves and their children into electronics for entertainment. She wonders where the fun has gone and why she is the only one to see what the world lacks. Then, she predicts that the world will end . . . and it does.

To say much more would give away a bit too much of the plot, I’m afraid. But, the book is not just apocalyptic. Instead, it ends up being a kind of combination of It’s a Wonderful Life and Pay It Forward, in that Coupland takes a possibility, shows it to a handful of people, drops in a ghost to guide them, and then tells them how they can change the world in a positive way.

The oddest thing about this book, to me, was that I found it so much more plausible than Pay It Forward. A book with a ghost, a world where all but a few people die, several people have visions that come true, and a woman goes into a coma out of fear but comes out of it 17 years later . . . all that certainly does not seem plausible when you look at it purely from a plot perspective.

I’m guessing the differences are that Pay It Forward was just a little too simplistic and unsurprising for me - there is certainly no way you can call Girlfriend in a Coma bland - and that I have personally had visions which then showed up as headlines (see yesterday's Friday Freakiness post for more). That doesn’t make the book or the real-life visions any less freaky; but, it made the story more palatable to me for some reason.

Besides being a nicely creepy book (for R.I.P. read #1), zipping into my Top 5 Reads for 2006, and simply ending up an entertaining read, Girlfriend in a Coma gave me the impression that I'd been kicked in the forehead by a higher power. "So, you don't think a handful of people can change the world, BookFOOOOL?" Ummm, okay. I get it.

This was my first Douglas Coupland novel, incidentally. I stalled on Generation X, but am guessing it just wasn't the right moment for that title. I'm a very fickle reader, at the best of times. We shall see.

36 Views of Mt. Fuji by Cathy N. Davidson
My Cousin Rachel by Daphne du Maurier
Posted by Bookfool at 6:58 PM