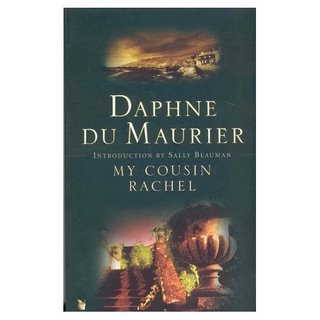 I dried myself as best I could upon my shirt and walked up through the woods, back to the house. The moonlight made a ghostly path for me, and shadows, eerie and fantastic, lurked behind the trees. Where my path divided into two, one taking me to the cedar walk and the other to the new terrace above, I heard a rustle where the trees grew thickest, and suddenly to my nostrils came that rank vixen smell about me in the air, tainting the very leaves under my feet; yet I saw nothing, and all the daffodils, leaning from the banks on either side of me, stayed poised and still, without a breath to stir them.

While not the exact image of the copy I own, this image comes closest to my book's cover as it shows the large estate on the Cornwall coast which served as the setting for My Cousin Rachel.

In My Cousin Rachel, Philip Ashley tells the story of how his guardian and cousin, Ambrose, has come to raise him as a single man and then for three years wintered in Italy at the advice of his doctors when rheumatism sets in. In his 40's and never previously interested in the concept of marriage, Ambrose is captured by his charming cousin, Rachel, when he meets her in Florence. They are quickly married and Ambrose describes their new life glowlingly in his letters home to Philip. As time goes by, though, the letters develop an ominous tone. Ambrose has become very ill and is either paranoid or seeing his wife in a new light. In his final letters, he begs Philip to come rescue him from the Villa Sangaletti, where Rachel lived with her previous husband, who was killed in a duel. He says Rachel, "my torment", has finally done for him.

When Philip finally arrives in Florence, after an arduous journey, he finds that his beloved cousin Ambrose has died and Rachel is gone. Eventually, Rachel turns up in England and from then on the question always hangs in the air, "Is she a poisoner, an evil woman after Ambrose's money and estate or a woman who cared and tells the truth?"

The end stunned me. But, I have to admit it was slow going for a while. I really enjoy du Maurier's writing because it's stylistically beautiful, suspenseful, and suitably spooky. But, I tired of young Philip's stupidity. At 24, coming into his inheritance on his 25th birthday, Philip acted like a spoiled brat. To say much more would, once again, spoil the book for those who haven't read it. And, upon closing the book I had to admit that the ending was just perfect in a way, although it left me with one rather crucial unanswered question (for which I suppose I can decide my own answer). Even though I got annoyed about 2/3 of the way through and peeked at the ending (something I almost never do, unless I'm concerned that the ending will be hugely disappointing) and therefore knew what was to come, I didn't know why or how. So, it still surprised me.

Still not my favorite du Maurier, though. I've read Rebecca, Jamaica Inn, Frenchman's Creek, and The Scapegoat prior to digging into this title. Of those, Rebecca and Frenchman's Creek were my favorites, Jamaica Inn and My Cousin Rachel probably next, and I felt very let-down by The Scapegoat. But, still, I stayed up late reading. So, heck, I guess it was pretty good, eh?

Still reading: 36 Views of Mt. Fuji
Started: An Obsession with Butterflies by Sharman Apt Russell
Up Next: Haunted by Heather Graham
Posted by Bookfool at 11:42 AM