I was tagged by the very cool New Orleans Chris to do this meme. And it's a hard one!!! I've been thinking about it for days and still don't feel like I quite know what to say, but I'll try.

Name up to three characters...

Ellie in Tomorrow When The War Began by John Marsden (and the rest of the series, set in Australia). She fascinates me; she's so resourceful and tough.

Eugenie Desiree Clary - The heroine of one of my all-time favorite books, Desiree by Annemarie Selinko. Just to hear about how she got to hang out with Napoleon before he became full of himself.

Meg of A Wrinkle in Time by Madeleine L'Engle - for the chance to travel to different worlds.

Elizabeth Bennet of Pride and Prejudice, but only if Mr. Darcy looked like Colin Firth.

Stephanie Plum of Janet Evanovich's One for the Money, etc., series. Because who wouldn't want two dark, gorgeous hunks following her around and protecting her?

Okay, this one's rough because I try to avoid scary books, but . . .

The Button Boy of Best New Horror by Joe Hill - terrifying, utterly terrifying blind person who is not what he seems. There are several really scary characters in that story, actually.

Those Scary Things that Suck the Life out of You in the Harry Potter books - can't remember what they're called, but death somethings . . . ???

Obviously, Joe Hill is a great at coming up with terrifying characters that continue to haunt a reader long after the book has been closed.

Next thing . . . tag three people. They don't say you have to desire to torment the three, but this was a hard one, people!!! Still, I had fun once I got going.

1. Kookiejar of A Fraternity of Dreamers
2. Andi of Tripping Toward Lucidity
3. Wendy of Musings of a Bookish Kitty

Finished, this morning: The Ladies of Grace Adieu by Susanna Clarke, but the kiddo is about to take over my computer. Review later on, maybe tomorrow.

Just beginning to read: Rises the Night by Colleen Gleason

Two books that walked in the door, this weekend:
My Favorite Earthling by Susan Grant
Birds without Wings by Louis de Bernieres

In my backyard, this afternoon: 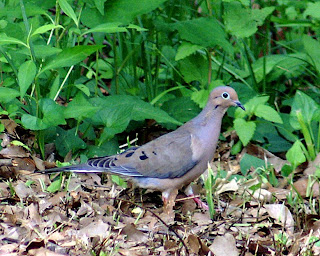 It's a mourning dove. My husband said something to the effect of, "Big woo." I'm very proud of myself for not swatting him (the husband, not the dove). He's going to Italy without me, so he deserves to be swatted. Do you think I'd fit in a suitcase?
Posted by Bookfool at 8:08 PM